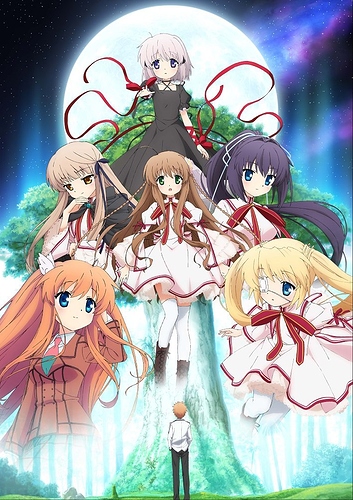 General discussion topic for the Rewrite anime adaptation. Feel free to make comparisons to the original visual novel, but please tag later-story spoilers (or any spoilers from the VN) with the [spoiler] tags, providing adequate context in parenthesis. Please use the individual episode topics to discuss the story up to that point without spoiler tags.

You can view the series on:
Crunchyroll in North America and Australia
Daisuki in Europe

Episode Topics
Episode 1 - “The World or Myself?”
Episode 2 - “The Place Where Youth Begins”
Episode 3 - “Welcome, Supernatural Phenomena”
Episode 4 - “Until We Return to Those Days”
Episode 5 - Asahi Haruka
Episode 6 - “Occult Club Activity Log”
Episode 7 - “A Place Lost”
Episode 8 - “My Name Is Kagari-chan”
Episode 9 - “Fate Begins to Turn”
Episode 10 - “Simply, as Friends”
Episode 11 - “Countdown”
Episode 12 - “The Song of Destruction”
Episode 13 - “The Promise I Exchanged With You”

Does anyone know how much time is left until Crunchyroll or other online services with english subtitles start showing the first episode?

Unconfirmed. I’d give it up to 4 hours max after the Japanese broadcast starting in 2 hours.

Crunchyroll has it at 9 AM PT [quote]Our second announcement of today is the latest Key visual novel to get an anime, Rewrite, launching on Crunchyroll Saturday, July 2 at 9am PT for
audiences in the following territories: North America, Central America,
South America, United Kingdom, Ireland, Australia, New Zealand.[/quote]
http://www.crunchyroll.com/forumtopic-957511/summer-2016-announcements (just CTRL+F “Rewrite” as it’s under a bunch of stuff now)

Here are 2, 48 hour Crunchyroll guest passes if anyone needs them to watch rewrite. Otherwise you will have to wait a week as a free user. Remember it is for North America, Central America, South America, United Kingdom, Ireland, Australia and New Zealand…

Just log in and punch it in here http://www.crunchyroll.com/guest_pass

I figured I’ll give these away here instead of giving them to some random person… Hope that is okay.

see you guys in a couple hours!

OK, before the next episode comes out, random theory speculation time~

So many people are running around saying stuff about “a second cour could be Moon and Terra, etc, etc.” But here’s my proposition: The anime adaptation is going to be Terra-esk.

Now I know most people are immediately thinking, “we all know why that doesnt make any sense”, but hear me out. I am proposing that (VN Terra) [spoiler]the anime is another solution in which full evolution seemed possible. I don’t have much evidence for this; in fact, all of my evidence comes from the first two scenes of the first episode.

Right at the end of the first scene, we scroll through five images which to any VN reader are easily recognizable as important moments in the 5 heroine routes. Then directly following that, the last image is of Kagari standing on the Moon, staring at the Earth.

From Moon route, we know that the heroine routes are simulations that occurred on the Moon. And that last image of Kagari highly resembles the last scene from the Moon route, in which Kagari stands alone, watching as the aurora/Kotarou fly back toward the Earth. Out of context, these shots could just be written off as “cool things to show in an opening scene”. However, remember that there is context, and the context is that the opening scene is a huge chronology of Earth’s history.

If you havent picked up what Im laying down yet, Im basically saying that “this is proof, because I am asserting that the opening scene is detailing events that occured before the events of the anime proper happen”. Thus if those event that we know happened in Moon route happened before the anime, then the anime must be Terra-esk.

My other piece of evidence is the fact that Kotarou has a “dream” in the second scene, a dream that, once again, any VN reader would be able to recognize as being from Moon route. Now lets think about this. How can Kotarou have this “dream” if those events hadnt already happened…? In other words, this is more evidence toward my argument of “if Moon came before this, then this must be Terra.”[/spoiler]

Interesting theory. It certainly could be the case in the anime (and everyone would hate it). However, I wouldn’t go as far as accept your pieces of evidence as an actual proof. Here’s my reasoning:

[spoiler]There’s no reason for this Kagari route to not be happening on the same level as the 5 girl routes, that is, as a simulation, yet still chronologically after them.
Remember how Kotarou accidentaly solved the problem by creating a little message? This message was a piece of information that Kagari had planted into her theory and then ran a simulation to see if it actually works. In other words, Terra route had existed as a simulation on the same level as the 5 girl routes (and many others) before the real Terra route (which is an almost perfect copy of its simulation) had been executed on earth. The only difference to those 5 girl routes was that Moon Kotarou had no recollection of the Terra simulation because it had been run after his appearance on the moon.

So in order for the first-anime-episode-Kotarou to see that Dream, Moon Kagari merely needs to take some of Moon Kotarou’s aurora or fabricate a copy of his memories and plant it into her Kagari route simulation just like she did with Kotarou’s message in the Terra simulation. (Heck, Moon Kotarou might as have done that himself) [/spoiler]

We might as well try to find a meaning in why the only moon memory Kotarou had seen was of him getting killed by Kagari. This might be a kind of message. Something like Kagari making clear that, as Kotarou is now, she will never accept him. So in order to become acceptable, he has to prove himself in a simulation and then maybe have that memory become part of Moon Kotarou.
Yes, this is a very wild speculation.

True. I didnt really mean it as “proof” as much as just “my reasoning”. (I honestly would be pretty disappointed if there was no Terra too since it was my favorite part, but I still think it would be incredibly interesting if done right to see them take this story in a completely different direction.)

I definitely think that future episodes could easily prove me wrong, since All the Moon Kagari interactions/simulations seem to be happening in some weird time thing where there’s not a strict chronology. So it could easily be a simulation that was run after the others. However, I dont think that would be as much fun~ :masgrin:

And while we’re speculating…

Personally, I think this is just because they’re gonna spread those scenes out over several episodes, and I hope to see more in the future.

@Yerian That’s… Actually a pretty good theory. I’m still in the “Moon/Terra will be Season 2” camp, but your idea is definitely an alternative I can see them going with. They’d have to portray the events of Terra prior to the ‘split’ in a flashback form, and some sort of Moon dream sequences, but it’s possible.

My other piece of evidence is the fact that Kotarou has a “dream” in the second scene, a dream that, once again, any VN reader would be able to recognize as being from Moon route. Now lets think about this. How can Kotarou have this “dream” if those events hadnt already happened…?

It’s a small thing that doesn’t really affect much, but one thing to remember (Moon) Isn’t Moon described as being “outside of time”? As in, it exists in a place where time holds no meaning except to itself, where the events of the past, present, and future all exist outside of Moon? Therefore, it might not even be “memories”, but maybe a “link”? Idunno, it’s a very vague concept at best, and I might be slightly crazy.

It’s been a while since I’ve read it, but I think that was mentioned somewhere

On an unrelated note, I wonder if they might be cool enough to (Rewrite VN - All Routes) [spoiler]change the wheel each episode (culminating in flashing wheel episode 13) based on the OP from Episode 2:

I think the biggest assumption you are making is that (rewrite VN spoilers)[spoiler]this anime is not, in and of itself, a simulation. Including the opening scene showing the creation (or, in this case, re-creation) of the world. I am confident in saying that if Kagari simulated the anime route (or any other route for that matter), she would have simulated it from the beginning, including creation.

As for your second piece of evidence, well, it hooks on your theory that Moon came before this. However, moon’s timeline, I believe, really cannot be seen as something in that sort of linear fashion. I personally have a theory where the entirety of simulations happen within the split second that kotarou decides whether or not to attack kagari. That being the case, as they happened on a different plane of existence entirely, it doesn’t need to have happened before the anime for him to remember those things.[/spoiler]

Just something interesting about the ED my friend noticed. In the scene where Kotarou picks the girls up: 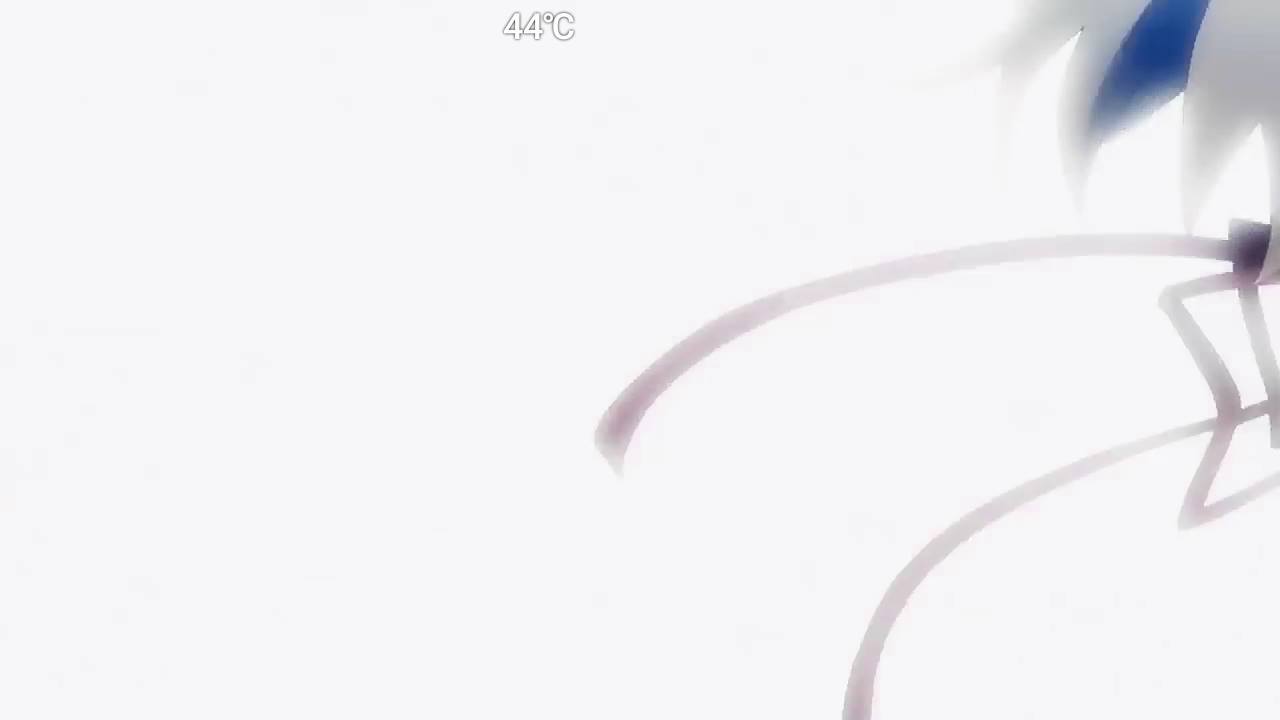 Familiar? She doesn’t show up anywhere else besides that one frame, so I thought it was interesting to note. There are many more things hidden throughout the OP and ED (Leaf Dragon spotted as well!) but I’ll leave that to someone more capable. They’re basically teasing VN readers now.

wait wat where (I tried looking but I still can’t find it T.T) 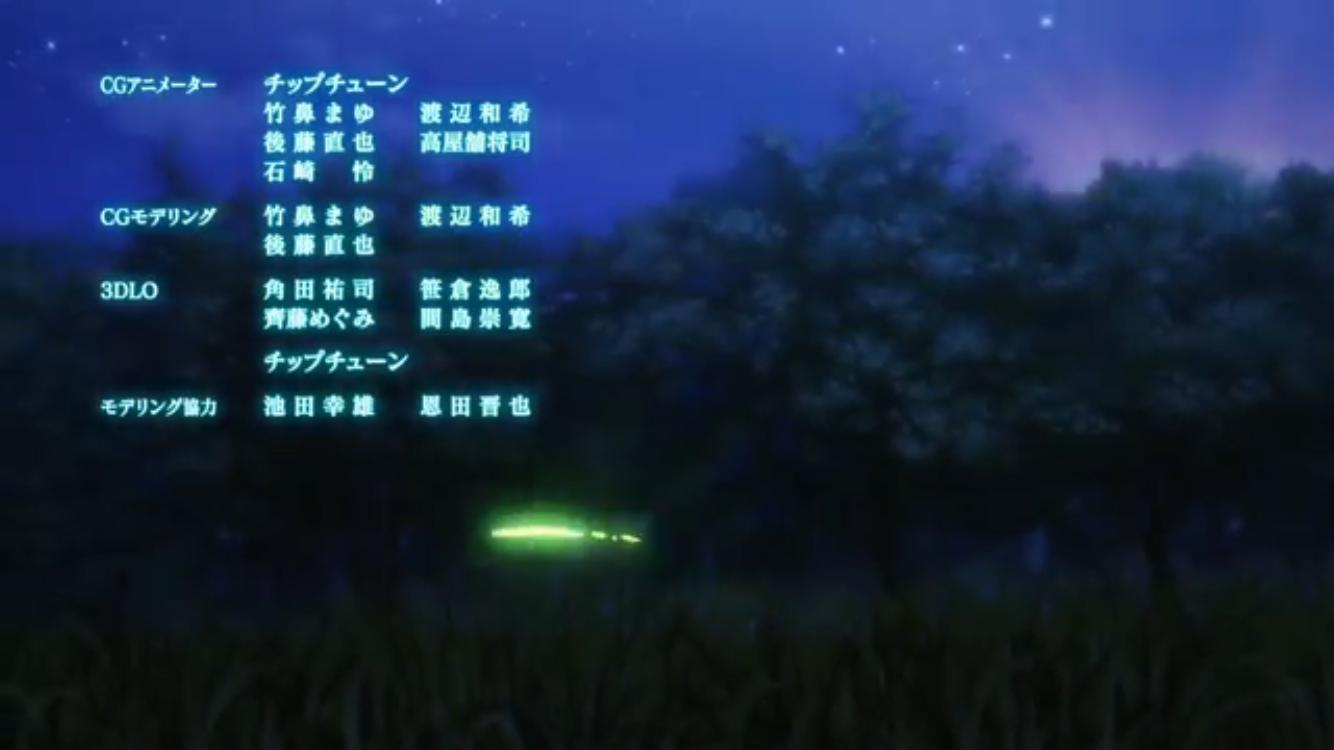 …that’s slightly unexpected. I was trying to figure what it was. XD

Frankly she looks a lot like Komari from Little Busters.

Unless that’s exactly what you were referring to lol 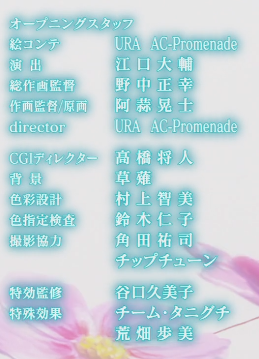 I just realized that the OP was drawn and animated by one person with our chief animation director correcting his genga. Not sure what to feel about this.

Ebata in the ED on the other hand, is used to drawing everything on his own so I am not really surprized.

Familiar? She doesn’t show up anywhere else besides that one frame

Pretty sure that’s just Akane. Even if we assume it’s Kagari, why would it look like that? Kagari’s ribbons are around her wrists, so they wouldn’t be that close to her hair. I’d say it’s Akane’s hair with the ribbon at the lower back of the uniform. I know that ribbon is supposed to be more white, but it’s a single frame in an anime with pretty simple art. However, which assumption sounds more likely: they broke the pattern and theme of the entire ED for one frame, or a key animator decided to save some time?

The light is just a representation of Kotarou as he moves towards the place where the heroines are sleeping.

However, which assumption sounds more likely: they broke the pattern and theme of the entire ED for one frame, or a key animator decided to save some time?

They broke the pattern and theme of the entire ED for one frame. Because it’s just one frame, I doubt that they would decide go just “save time”. I don’t see why Kagari wouldn’t appear, considering she is the end-heroine, and the anime’s focusing on her route.

Plus, the end of the hair is quite clumped. Even 8-Bit wouldn’t mess that obvious fact up. So no, the signs of it being Kagari is more likely.

Plus, I just rewatched it. (Cant take a picture at the moment) Might just be me, but you can see Akane’s long hair fading away, while the next frame shows an entirely new set of hair. Ribbons are one thing, but hair length & transitioning is another.