Rewrite Anime - Episode 4 "Until We Return to Those Days" 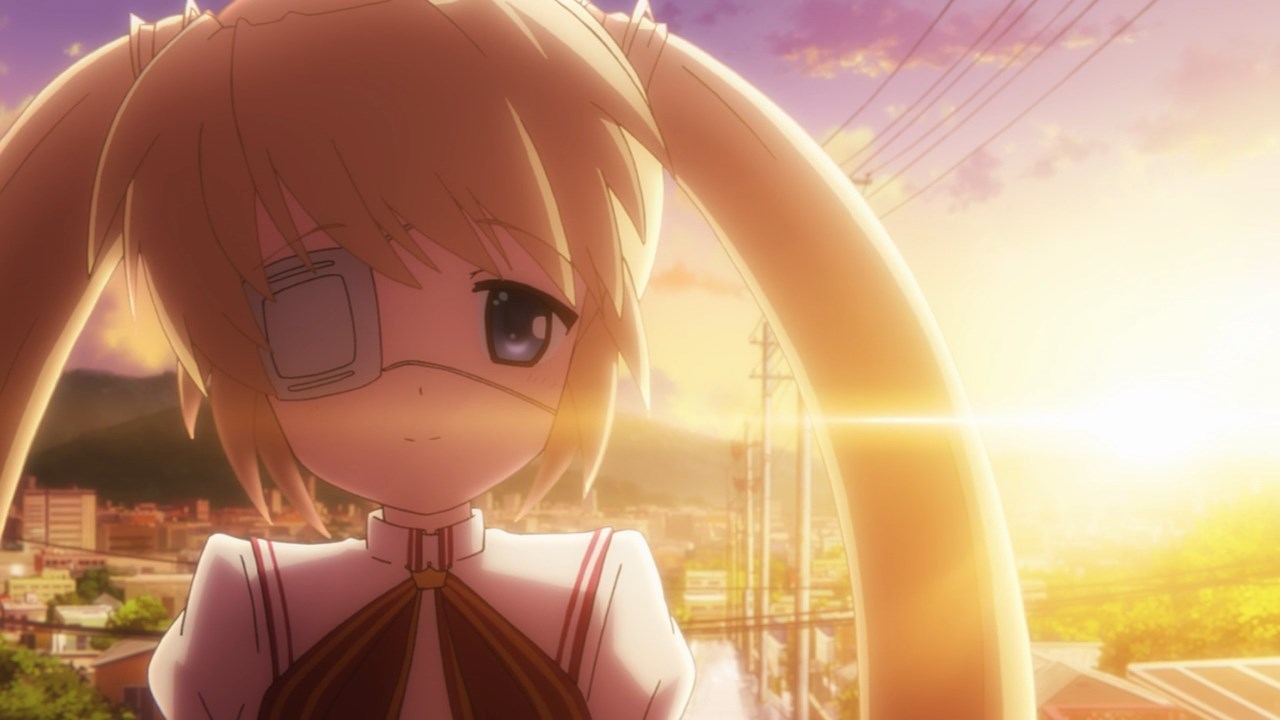 Discussion topic for Episode 4 of the Rewrite anime, which premiered on the 23rd of July, 2016. All references to outside works and to future episodes must be tagged with a [spoiler] tag.

You can view the series on:
Crunchyroll in North America and Australia
Daisuki in Most of Europe
Akibapass in Germany

This episode really benefited from just choosing one thing and sticking to it by taking care of Shizuru’s backstory, but that ending bit with Lucia was oddly tacked on. I didn’t notice as many weird animation moments or dumb between frames as other episodes, so I’m hoping that’s a good sign of things to come.

As @Arete said, I’m glad they stuck to one thing this episode. They portrayed her past quite well, to my memory at least. The introduction of Imamiya also felt quite natural and well done compared to the other introductions that had to be changed around.

The two main issues I had with this episode were the song placement, and that oddly thrown-in bit with Lucia at the end. As for the song placement, I heard Radiance, Scattered Flowers, and Scene Shifts There all within, what, a 10 minute span? It felt so odd and jumbled. Their use of Koibumi wasn’t bad though, considering they probably wouldn’t have had another place to use it.

The bit with Lucia definitely seems to point at her getting this treatment next. Although, slapping it at the end of the episode like that was plain awkward, and ruined the tone and feel they had build up, in my eyes.

In any case, outside of those two things, I really enjoyed the episode. We got Esaka’s classic line, more Shizuru, Imamiya, and even Yoshino’s Wolf pack.

Any episode with best girl Shizuru is a best episode me to.

Also about this, it looks like we aren’t going to get anything about the the Monthly Terra, as that’s when Kotarou meets Imamiya.. Not that it was ever really important in the VN.

I heard Radiance, Scattered Flowers, and Scene Shifts There all within, what, a 10 minute span?

This is one disadvantage any anime is going to have. It can be jarring trying to cover the entire range of emotions in Shizuru’s backstory quickly.[quote=“Purple, post:4, topic:2998, full:true”]
Any episode with best girl Shizuru is a best episode me to.
[/quote]

sigh
I don’t wanna complain, but that last Lucia part didn’t do the episode any good.

As for the rest of the episode, I quite enjoyed it. It wasn’t perfect, but it’s a solid job.

Oh, and go to hell, Imamiya!

I truly loved this episode and I think it captured Shizuru if only to shorten the length of her backstory. I think I mentioned about her route back then when playing the VN if it would be animated and my dream came true, because I was looking forward to seeing if it was going to happen. The songs “Scene Shifts There” and “Scattered Flowers” when they were playing invoked really heartfelt emotions, especially with her tragic backstory and made me teary-eyed a bit. I loved when they started playing “Koibumi” at the end of the credits and it still reminded me of how beautiful and lovely the song really was. To this day, I still love Shizuru as one of my favorite characters.

Other than that, of course, Imamiya showing up soon was inevitable and later we’ll see how he becomes important in the series. The Wolf Pack was very memorable too and how the gang had started out with Yoshino being their leader. Did anyone notice Esaka’s business card? I thought that was funny and of course his signature line always make me jump out of my seat. I was also surprised seeing Kagari in the school in broad daylight since that’s never happened before, just not so sure about that, but was her being there necessary in the scene?

I was also concerned about Lucia at the ending as well, and that would be the beginning where we find out about the origin why she wears those gloves and her real identity to be revealed later on the next episode. Overall, I enjoyed this episode though I wondering how much time they’ll need to get to the real core of the story.

I think the Kagari scene served to show that others couldn’t see her, plus hint more at a connection with Kotori.

Also is it just me or was the Lucia bit the next episode’s preview? It happened post-credits.

Very good episode, except for that last bit. Just why?

(Rewrite Spoilers) That scene where Kagari walks into the classroom was pretty nice. Not only did it establish that other people cannot see her, it also hinted at Kotori having a connection to her (and only pretending not to see her). There are a few details like that in the earlier episodes as well, I always appreciate when the writers take the time to put them in.

Too bad they added some comedic moments for Koibumi. I would have been perfectly fine if they just had Kotarou narrating about Shizuru when Koibumi was playing.
The feels got to me ;-; Lets all cry a river.
Episode 5 will be Lucia-focused. 2-3 more episodes before “that day”.

I’m so disappointed with this episode… In fact I knew something was going wrong since last week’s episode. And when they released the trailer I knew that what I didn’t want to happen is actually happened.

First of all, I remember saying something about starting with Gardian last week. But that was only an assumption. I guess that explains why they are rushing some scenes, but the whole idea of them dedicating a whole episode of rushed scenes is unacceptable. I was complaining about that when I finished ep3 but most of the scenes there were not related to the story (excluding Sakuya’s scene).
But here, I couldn’t even feel the characters’ emotions.
And what made me even sadder… The way the Shizuru said her story lacked the emotions. It’s as if she is reading out of a book or something, especially the part when she says “。。。と言った” (… to itta).

Second, has to be the songs placements… ESPECIALLY KOI BUMI!
Koi bumi by Yanagi Nagi is one of my favorite songs ever. And what made it so special to me is the placement… But here, it had not impact whatsoever and it was just playing in the background as if it was any other normal ending .

Finally… They didn it again with another face reveal… I complained about the Sakuya scene last episode… And talked about the lack of mysteries in the anime…
Only to see that they’ve revealed Esaka’a role and connection to Shizuru after they were trying to keep it a secret at the end of ep3 and the beginning of ep4.

I’m so sad to see the Anime fall this hard… I just hope that they’ll not decide to animate Terra in one episode or something.

Don’t misunderstand me, I know that this is “not the Rewrite we know” but I believe that the parts we “know” should be handled in a better way somehow.
I’ll keep watching with lower expectations from now on…

Once again, I liked the episode as a VN reader, but this also just confirms that this has horrible storyboarding/pacing for an anime-only viewer. How much has the anime really shown about Shizuru before suddenly throwing in a super sad backstory in episode 4? If I was a first-time viewer, I would be wondering why I should even care about this character. Like, I think this is possibly the best episode yet as a standalone judgement, but I just don’t think it makes any sense in the context of strictly the anime itself and how little it has done to get viewers invested before dropping plot reveals.

Things just sort of happened and before you can process it, it moved onto the next scene. Now episode 4 happens, and this character you know very little about suddenly reveals a bunch of backstory including her superpowers and an entire organization. How many anime-only viewers could even remember Nishikujou’s name? And suddenly she’s part of a major plot reveal? All of that in a single episode right before moving onto some drama with Lucia, another character you know very little about. I don’t think any individual scenes are even that bad (hence why I’ve said in previous threads how much I’m enjoying this despite the problems) but when they get stitched together like this with almost no transitioning or explanations, I don’t think anime-only viewers are going to respond very positively. I’d gladly be wrong though.

I felt the same way. I was much more invested in the characters when reading the VN. Shizuru and Lucia were two of my most favorite characters. Seeing them in the anime made me happy but at the same time the emotional impact was much less. I really hope Rewrite gets more than 1 cours.

Holy spoilers! They’re not holding much back are they.

I wonder if this is the full extent we’ll see of Shizuru’s route in the anime. Maybe they’re planning to give one episode to each of the girls. I dunno if they plan to do it for all of them though.

If they do, we can expect 4 more eps, giving the “6th route” another 5 eps, and then there’s the club field trip with the Leaf Dragon.

To be fair, at least during the first three episodes they were able to develop a little bit of chemistry between Shizuru and Kotarou. Not enough for what this story requires, but their interactions were good. It’s just my point of view, but the “link” between them seemed more fluid than, for example, with Lucia or Chihaya, which means that the next episodes could feel even worse. But you’re right, at least this chapter, as a VN reader and as a standalone, was quite acceptable.

I was pretty shocked at the pacing and the decision to do Shizuru all in this episode. It wasn’t bad but, I didn’t expect it. Her route is my least favourite, but seeing it animated gave it more emotion somehow. I like that they added Imamiya to the early scene. I remember his early presence just got washed in the mix and I didn’t feel the foreshadowing, but here it stuck out.

I also felt the Lucia bit was just an on tack-on bit that really was out of place.

With everything being said as a non VN player, this feels so like a I’m watching a VN sped up rather than an adaptation for an anime. But it isn’t horrible, I still have hopes of where this will go.

I would feel happy if only they didn’t try to push every important details about Shizuru’s past in a few minutes. This episode is like a fast forward version of the VN. Like how fast the conversation between Kotarou with Shizuru (and later with Nishikujou) look obviously awkward.