Same time as South America is listed as one of Crunchyroll’s regions for Rewrite.

Do I need a Crunchy roll subscription or anything to stream it?

How about you don’t argue with a moderator when he tells you that the discussion is getting out of hand.

I’m so hyped because the PV that I had to make a gif… why Pani and Gil? well, they’re fun and I didn’t expect to see them so soon (I should have made Kagari, but plenty of people would make gifs of her…)

So… no Sakuya? Am I the only one surprised?

I am scared that sakuya did not appear

You cant steal my husbando 8-meat
In the final part of the pv… Akane is in the bicycle? 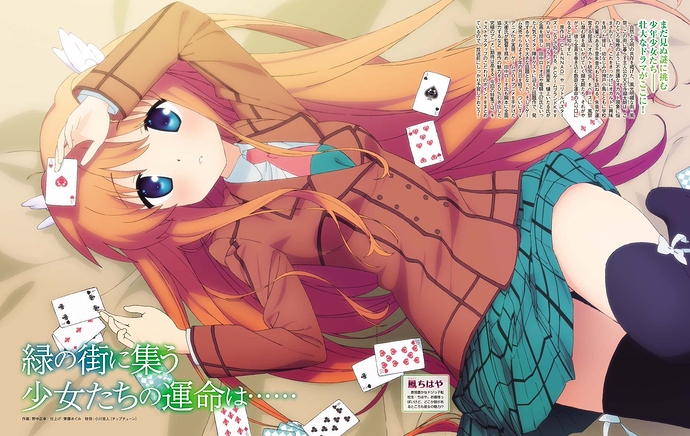 I am scared that sakuya did not appear

Don’t worry. I’m sure he’s going to appear in later episodes. It would be a crime to not have him.

Q:What are your thoughts of knowing that Rewrite’s gonna be animated?

Tensho: Actually I didn’t receive the request for being a director for the anime but I, myself, proposed to Aniplex for my wish to animate it. Around 5-6 years ago I worked as the animation director for the game and was really attracted to Rewrite and I talked about wanting to animate Rewrite here and there, but because the game is huge and hard to consolidate, and various parts are difficult to visualize, plus some issues for a studio, it was really hard to grant my wish.
One day Toba, a producer from Aniplex, talked to me about the second OP of Rewrite and said that he want to animate Rewrite. We talked about using an original route to consolidate everything at that time, and Toba, being a key-fan himself, agreed to this way of adaptation pretty swiftly but of course at that time we haven’t confirmed fully on actually animating Rewrite. But after that, we got approval from the creators and got to actually make progress in animating, and I finally felt that “I can finally really actually animate it!!”. I am really glad that this happened as I repeatedly proposed to animating Rewrite.

Q:What do you think is the selling point of Rewrite as a director?
Tensho: The shocking and enticing factor of the twists that have very distinct approaches when compared to other works from Key previously. I have heard about there are battles in the game before I helped producing the second OP for the game but I didn’t expect the whole setting and twist will be that huge. With the illustrations from Hinoue Itaru and music from Orito Shinji, Rewrite is a really touching and magnificent piece of work.

What do you think is the selling point of the anime version?
Tensho:

Q: What do you think is the difficult part of the production?
Tensho: It was pretty damn hard, working on the script. The volume is huge. The main writers always write times the length of the draft. Every time we undergo the loop of “which part should we cut” and “oh god I don’t wanna cut any parts of this”. Also, for the first episode, the 800 cuts is like 3 times of an average anime. Moreover, we are using 3D quite frequently so it was really difficult. We are using quite a lot of frames so it should feel like a semi-movie. I think the visuals are appearing to be quite worth-while so please look forward to the broadcast!

Q:What do you think are the important things to pay attention to in the character’s movements and their voice acting?
Tensho: We are paying a lot of attention on the details of the movements. At first we thought that it will probably be kinda hard to animate such many lines but the staff has pulled it off and worked hard in animating detailed movements. Especially for the first episode – Nonaka Masayuki, our character designer has done a scene that is a must-see. The scene which Kotarou was troubled by Kagari during midnight, and the scene which Shizuru first showed up. Please remember that-- I think the very fluid movements from her should be pretty noticeable (laugh).
As for the casting, because almost everyone is from the game and are knowledgeable about their own characters, they are able to give really intricated performances. Especially for Morita-san, the VA for Kotarou, who has the biggest amount of scripts on his hands, showed his greatest effort in acting and has also ad-lipped. The place for recording is always filled with laughter.

Q: The routes are distinct in the game, so how will the story composition of the anime be?
Tensho: In the game, there were 5 heroine routes, but for the anime, Tanaka Romeo helped a lot on creating the original sixth route, which I’d be happy if you guessed it from seeing the second key visual. No worries, we will make sure that the heroines get their time to shine. It will be a really great story so please look forward to it.

Q:Who is your favorite character?
Tensho: Every character is full of charisma so this is tough but I think for now it’s Kotarou. In the later half of the game, we got a voiced Kotarou with a really dark story along but hearing Morita-san’s really interesting acting for the light-hearted parts of the beginning of the anime (as the recording has already started), I think the charisma of Kotarou has multiplied that made him really likeable.

Q: Say something to the fans that can’t wait for the broadcast!
Tensho: The anime, for me, is also something I have been anticipated for long. I have treated this adaptation with the heart as a fan. The anime staff has been working really hard to deliver a great work and is really reliable, and I hope that the love they are pouring into the anime can be felt. The anime will soon be broadcast, so please support us until the very end. 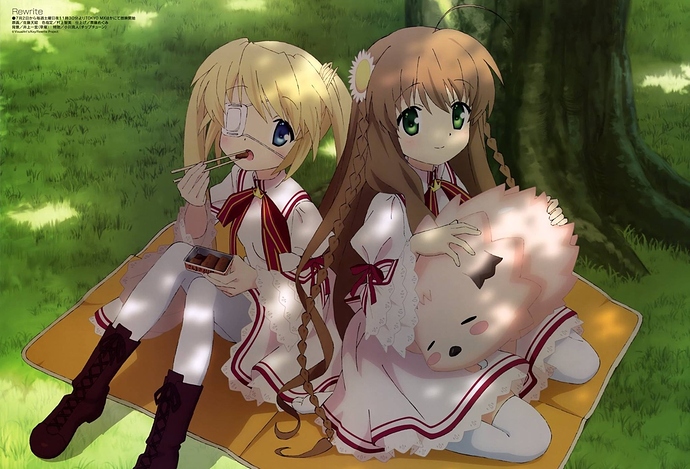 And there’s also a difference that was posted, showing the color difference between PV2 and PV3. Seems like 8-Bit is getting comfortable with the Rewrite universe for how to color and shade in certain aspects for the scenario.
Source https://www.facebook.com/Rewrite.TV/posts/1768862556734184:0 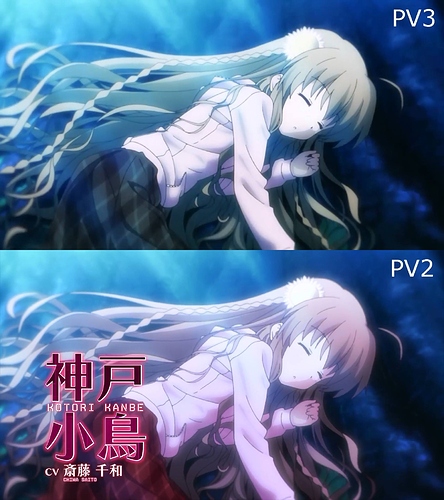 Silly me. I have forgotten to put the arguably most important questions of Rewrite on that to-include list:

Change yourself? Or change the world?

The Rewrite anime website was updated with a Kagari voice ad like the other main characters, and also some new pictures.

Well guys, it’s been a good run, but since the anime is beginning it’s time to make way for some new topics.

See you there in a few hours!