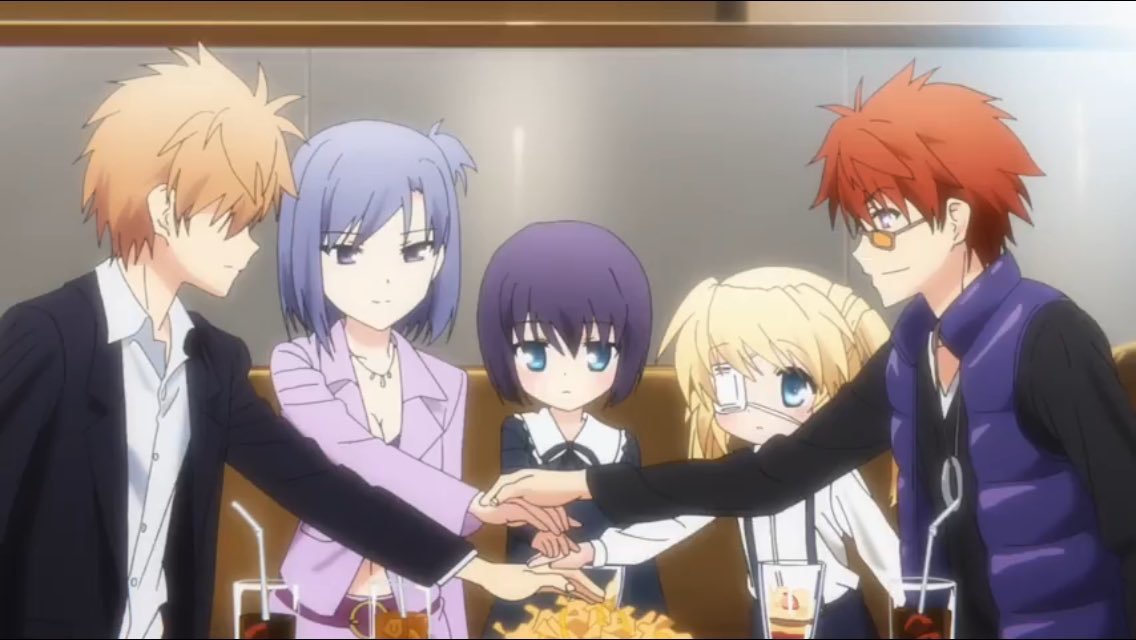 Discussion topic for the 23rd episode of the Rewrite anime which premiered on the 18th of March, 2017. All references to outside works and to future episodes must be tagged with a [spoiler] tag.

Welp.
I’ve enjoyed this episode more than a previous one. Pacing was somewhat abrupt, and I have some questions about some of the parts of this episode, yet it was good overall.
Scenes with Esaka & Kotori were done especially well… Though, their decision to show choices Kotarou make kinda strikes back as it is just awkward.

As for Lucia’s sudden appearance in the scene at the cafe… I can understand why did they decide to include her there, yet the fact that she wasn’t wearing any gloves enforces the plot hole even more… Well, character-wise she is an ebodiment of a walking plot-hole…
Here goes a random speculation: in this Terra she probably hasn’t been made into a part of “New Humanity” project and haven’t met Brenda… therefore, no poison. Only her 2nd ability is available. < this is a pure speculation, so no basis at all…

Ohmygod. I enjoyed this episode a lot. It might just be me, but I strangely like the choppy feel; I feel that it actually worked with the first half. I’m also very satisfied with the way they handled Kotarou vs. Esaka. So cool. Also, Rewrite za Life piano ;u;

This might just be my second favorite episode in the entire series, next to Episode 14.

This was a really good episode here. I have to say they had some intense moments with Kotarou going in between both organizations knowing that he would end betraying both of them as he did a lot of brutal fighting. The important thing is that Kotarou had to do what was necessary for him to accomplish his main objective. There wasn’t really much time for him to consider the possibilities if the worst case scenario were to happen. I felt so bad for Kotori when she was infuriated with Kotarou after he decided to kill her familiar parents.

On a lighter note, some scenes I enjoyed:

Lucia and Shizuru looked quite adorable here as you can see their lovely smiles enjoying their dessert. 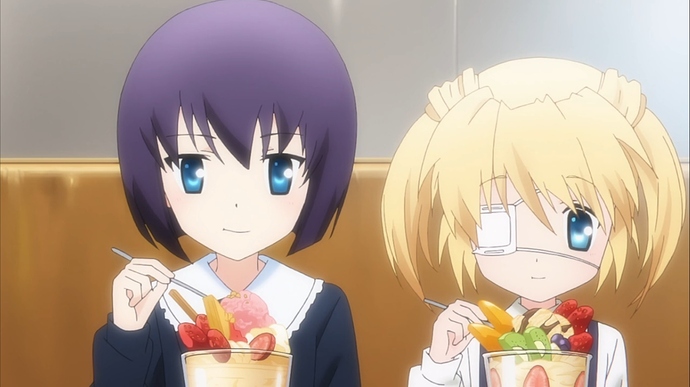 I did love the fight between Esaka and Kotarou which held quite well. Pretty awesome to see how Kotarou handled himself! 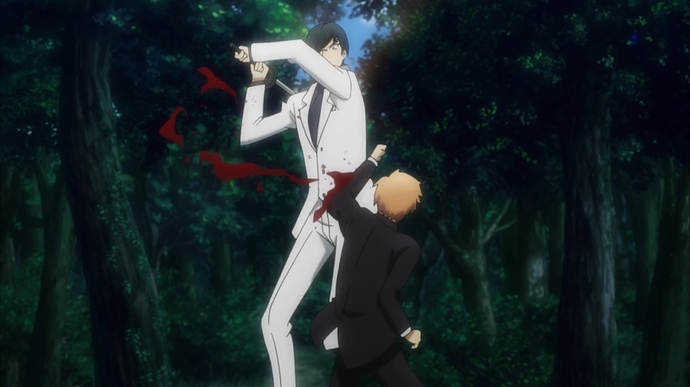 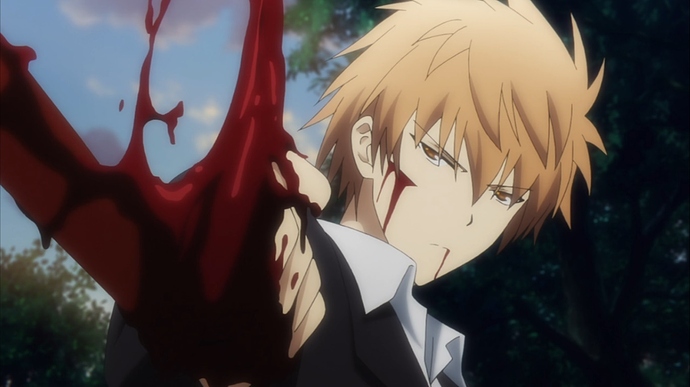 These scenes were especially hard to look over as Kotarou made his final chat with Esaka. He’s a really great opponent as well as a great guy too. 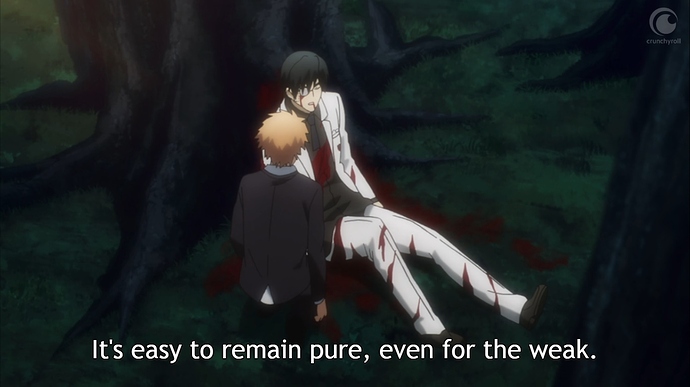 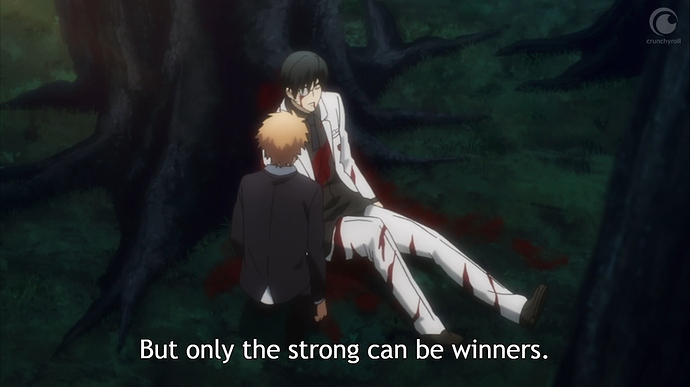 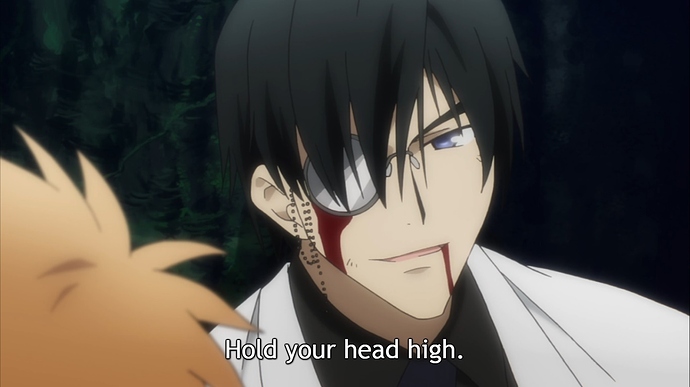 It’s hard to tell what’s gonna happen in the final episode and it’s got me going for a bit. I’m definitely looking forward to it so we’ll see how this season will end next week.

That was a good episode! I think the previous episode could’ve benefitted from having some of the tension of this one, really. Kotarou’s expression being ominously hidden as the trio (+ the lolis) assure their partnership was wonderful.

Though it kind of feels like next episode should be the finale…?

And so, Esaka-san left without explaining why he had given Kotarou special treatment. The episode was simply not long enough for that. sigh
Good thing we have a topic for those important quotes.

On a different note, Kotori had seriously scared me there. 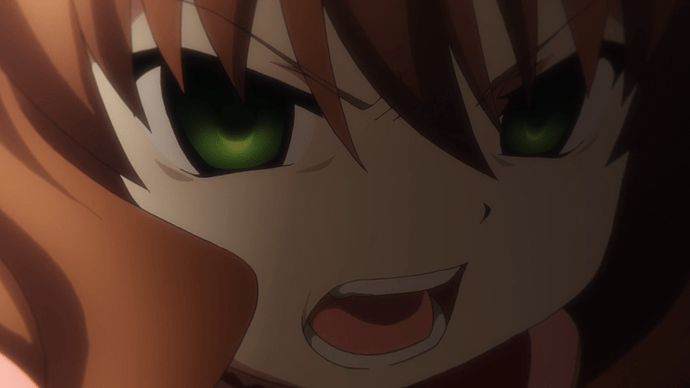 Genius or not, this is not a face a child should ever make. That’s pure malice and hatred. I think they kinda overdid it there.

[spoiler] For Lucia, I think also it was a good idea to introduce Chihaya and her in the story. It will seem less strange later when the five heroines meet Touka during the end of world. Like they are in the surroundings.
But, in the VN, my speculation was that Lucia has been made a part of “New Humanity” Project but the laboratory was destroyed during the Salvation before Lucia obtains her powers.
An useless hypothesis here, this would be weird if Touka is alright with the experiment, despite her weight for Lucia and leaves her in an orphanage after that. Even if it isn’t impossible.

For another point, they didn’t seem to have indroduce children in the Chorus, only the caretaker. It is consistent with their changes in Rewrite +. [/spoiler]

Otherwise, I found they have well shown the ruthless side of Kotarou. I didn’t expect him to hurt Esaka when he is immobilized. It was more brutal than in the game and I imagined the kidnapping of Suzaki much more…amazing… than simply an ambush with trucks.

I actually think that this face is really befitting the situation.
I mean, come on. He was the last straw for her… Her parents are dead. Even worse, she herself turned them into mamono.
And now this one last straw just thrown her away, destroying her parents remains in the process… and then declared that he always hated her.
I find this reaction befitting.
Also, not the one that children should do? True. But it is not like they can’t do such a face.

What the anime has done to Kotori is so unforgivable. They better make an ova dedicated to her HF route.!

dedicated to her HF route.!

That’s the thing though: you have to bring in HF content. The original was never kind to Kotori. (Though honestly HF isn’t all sunshine and rainbows cough cough Kagari’s scenario.) I recently read a doujin about Kotori dealing with the trauma of Kotarou’s betrayal; this shit was always dark as fuck.

I guess one thing I can praise about this episode is how they handled the blood. Most of the time when Kotarou stabbed someone, the blood was very prominent. The colors and lighting made it look very rich.
Like this is some juicy stuff. 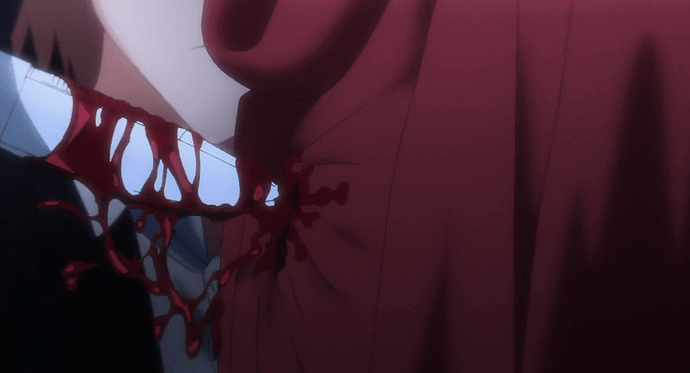 And then they had this awkward thing that’s noticeably darker than the rest. 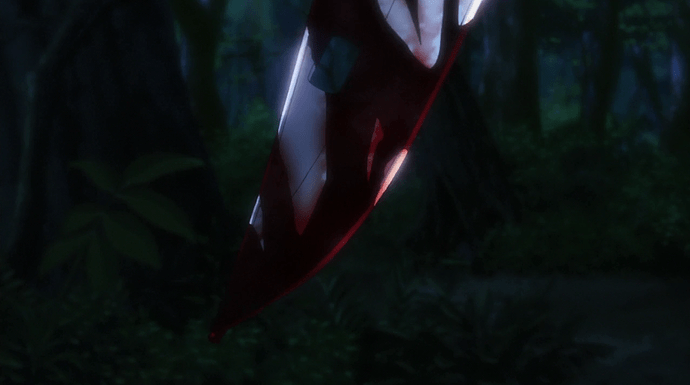 Well at least there are those moments where she went together with Kotarou to the HF in the original. I know that it has to be omitted in the anime’s original, which is cruel to her.

I hv read the preview pages, and wow that doujin looks very interesting!

Pacing was meh, but quality of other scenes is decent, the fight with Esaka was short but really cool. I’d be lying if I said I was satisfying with whole of that but this may be a best possible quality. (I am obsessed with the original writing, so there’s always something to complain about, I hope who watch the anime will read more detailed explanation or VN) Well, there’s one episode to go, I hope it becomes a good memory in the end.

By the way, Kotori’s face … reminds me Higurashi…

Did you notice that at the beginning of the episode, when Koutarou is in the cafeteria, appears a statue that has stakes nailed like Esaka when is attacked by Koutarou with his blood? 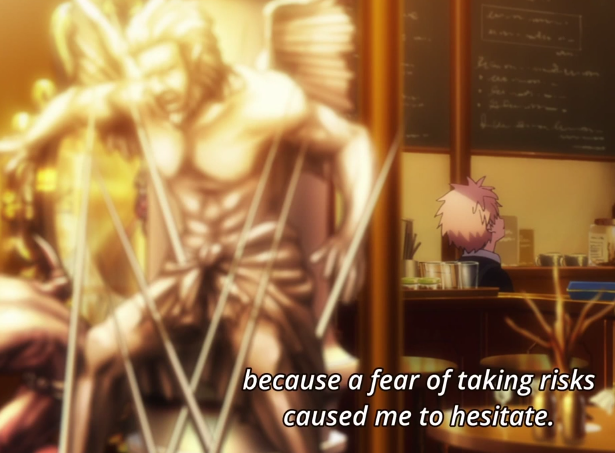