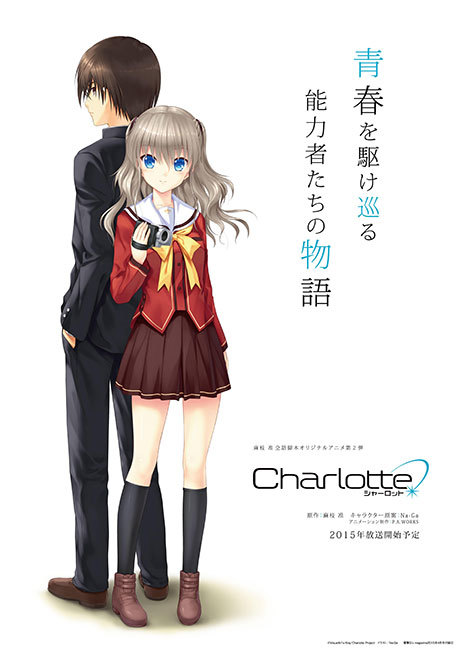 On December 22, 2014, Key (not just Maeda and Na-Ga as was the case with Angel Beats!) announced that they will be working together with Aniplex, Dengeki G’s, and P.A. Works to produce a new anime series entitled “Charlotte,” to air sometime in 2015!

So it’s been a while since Charlotte has been announced, and news about the series has been popping up, mostly from consecutive issues of Dengeki G’s magazine since December. Here is the information we have so far:

Charlotte takes place in a world where some selected people have special abilities. These abilities start appearing as people approach puberty. Specifically, Charlotte is set in Hoshi no Umi Academy, a school that caters to teenagers with special abilities. This school helps out with the students and how they manage their abilities, and pays close attention to the students, to the point of keeping surveillance cameras on-campus.

The opening song has been revealed to be entitled Bravely Song and will be performed by Lia, and the ending song is entitled 灼け落ちない翼, roughly translated as Burning Unfallen Wing, to be performed by Tada Aoi. Marina has been slated to return as a performer of the in-series band, ZHIEND, where she acts as the singer for the lead vocalist, Sala. ZHIEND’s lyrics are going to be written by Jun Maeda, and will be composed by Hikari Syuyo, and has been described as a “foreign, post-rock band”.

Charlotte focuses on Hoshi no Umi’s student council and the four students who make up the council. The primary job of the student council is to observe the other students and help them out when they experience problems due to their powers. The members are:

Yuu is the main protagonist of our show, and is said to be pretty rude and egotistical. His special ability is that he can ‘hijack’ another person for up to 5 seconds. He uses this ability to hijack honor students’ bodies during exams and copy their answers. He also has a little sister, Ayumi, who he seems to care greatly for. Yuu will be voiced by Kouki Uchiyama.

Nao is popularly known as the cover girl of Charlotte and is also the president of the student council. She likes getting attention for what she does, but does her job well, and records progress of students’ abilities with her handycam. Her ability is that she can remove herself from the view of one person, rendering her pseudo-invisible to that person. She is a huuuuge of ZHIEND, and despite her serious personality, she goes crazy when it involves anything related to them. Nao will be voiced by Ayane Sakura.

Joujirou is, for lack of better words, a Takamatsu (Angel Beats!) clone. His special ability is that he has access to very high speed movement from one point to another, which makes it seem like teleportation. However, he can’t really choose where he stops, and usually ends up in funny situations because of this. He wears protective armor under his uniform, just in case. His personality is, also like Takamatsu, one that tries to be serious but fails at it. Joujirou will be voiced by Takahiro Mizushima (also the voice of Takamatsu), and he is also a huge fan of the next character… 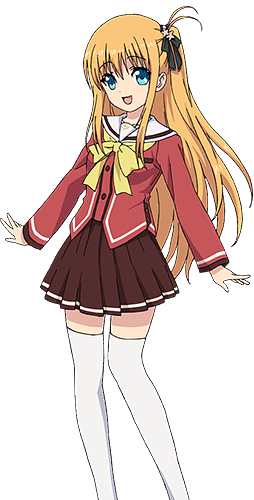 Yusa is the popular and cheery school idol. She is the lead vocalist of the school band How Low, Hello and has a part-time job as an actual idol. Her ability is that he can channel the dead. Specifically, she can channel her dead, older sister. However, she doesn’t really have control over when to channel her, and her sister seems to just take over Yusa’s body at will. Yusa will be voiced by Maaya Uchida, who will also be performing the songs for How Low, Hello, whose music will be written and composed by Jun Maeda. 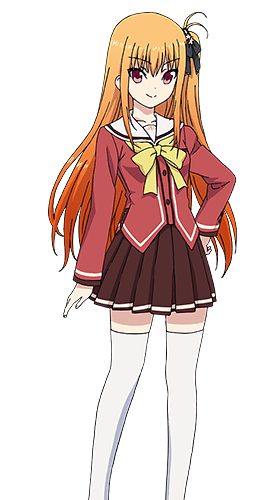 Misa is Yusa’s deceased older sister who seemingly takes over Yusa’s body at will. When she takes over, Yusa’s appearance changes to that of what you see above. Not much is known about her except her voice sample seems to portray as a very brash character. She also has her own special ability: Pyrokinesis, or creation of fire from thin air. Misa will also be voiced by Maaya Uchida, and her voice sounds totally different from Yusa’s despite coming from the same person.

Ayumi is Yuu’s younger sister, who Yuu cares a lot about, and who cares a lot about Yuu. They seem to be quite close, which is ironic considering Yuu’s personality. Not much else is known about her, but Nao seems to know her personally. She will be voiced by Momo Asakura.

We don’t know quite yet what direction the story will go towards, but all they have to say is that it will be a very Key-like story. The official website states that, after Yuu meets Nao, the fate of the special abilities shall become uncovered. We also don’t quite know yet why the anime is called Charlotte . But, as most of us already know, the story is written by Jun Maeda, and the character design is by Na-Ga.

Just recently, it has been announced that Charlotte will be airing in July 2015, during the summer anime season. No word yet on the episode count yet. Also recently released is a Charlotte 4-koma manga which started serialization in Dengeki G’s Comics on March 2015.

Now, for some interesting observations!

So, any additional speculation and added information would be greatly appreciated as we all anticipate this unique project from Key!

It’s also worth nothing that her uniform seems to indicate that she is indeed a school student. Whether that’s a student in present day Japan, or in some kind of metaphysical world remains yet to be known

But yeah, most likely gonna be a high school thing

I’m eagerly waiting for the day we finish Charlotte and people going on “yo this picture with the video camera pointed toward her has a hella deep meaning”.

Guy falls for girl, she blows him off. “Insert supernatural phenomenon” guy works hard to gain her trust and wants to be more than friends. Insert mediocre romance plot (h-scene optional). Somewhere somehow someone dies from Key-aids.
The End

On a serious note do you think they’ll take a more surreal approach and leave out the Key magic?

Time for crazy speculation based on very little!
Charlotte isn’t real, and never has been. The world she’s in isn’t real either, but some sort of computer simulation. The guy is real, and is trapped in the simulated world (at least at the start) with no knowledge that it isn’t real. This world focuses on Charlotte (or at least the main girl whoever she is), who was created by the programmer to basically become his love interest because the programmer girl wants him herself, or something like that. Motives are hard to speculate on, geeze~ But in the end the world starts to break down for one reason or another and, well, who knows how it really ends? Probably with guy and programmer girl together, because of course.
Anyways, that’s my guess up here for posterity.

Here’s a question. Why do you think she would be recording herself?

Guy falls for girl, she blows him

Probably a part of her character theme. Maybe trying to prove that she exists? All of the shadows in the image are stars, and the video camera is also displaying stars. It’s probably only recording her shadow?

I really really hope this goes down a philosophical and existential route. That gets me going the most.

That’s honestly what I’m expecting from what I’ve seen so far. Almost like Planetarian in a sense, but the opposite? That probably doesn’t make sense, but oh well. Either way, I think I’m hype.
(Pity it’ll be an anime instead of a VN)

I really really hope this goes down a philosophical and existential route. That gets me going the most.

Charlotte isn’t real, and never has been. The world she’s in isn’t real either, but some sort of computer simulation.

Quite an interesting theory, but I wonder how you came up with the idea of it being a computer simulation. It seems to hint more towards something… extraterrestrial, if you will. Well if it is just something that came to you out of nowhere, that’s alright too xD

Here’s a question. Why do you think she would be recording herself?

Actually that made me realize another thing. Will put this in the opening post as well

Quite an interesting theory, but I wonder how you came up with the idea of it being a computer simulation. It seems to hint more towards something… extraterrestrial, if you will. Well if it is just something that came to you out of nowhere, that’s alright too xD

To be honest I probably had a different game/VN I played recently on my mind at the time which ran with a similar concept (I won’t mention which because it’s a huge spoiler), but the style of everything (especially the teaser video) seems to hint really strongly at something electronic or computerised, and the conclusion that the world (and especially the girl in the image) is a simulation seems to be the obvious one.

I agree that the style of the video does seem quite electronic, whereas the artwork style seems extraterrestrial. Especially the type of synths they use in the teaser BGM does heavily hint that.

Somewhere somehow someone dies from Key-aids.

Excuse you, its Keybola now. At least be sensitive to the modern-day problems.

There is also another girl whose silhouette was shown in the opening video at very beginning of the conference: 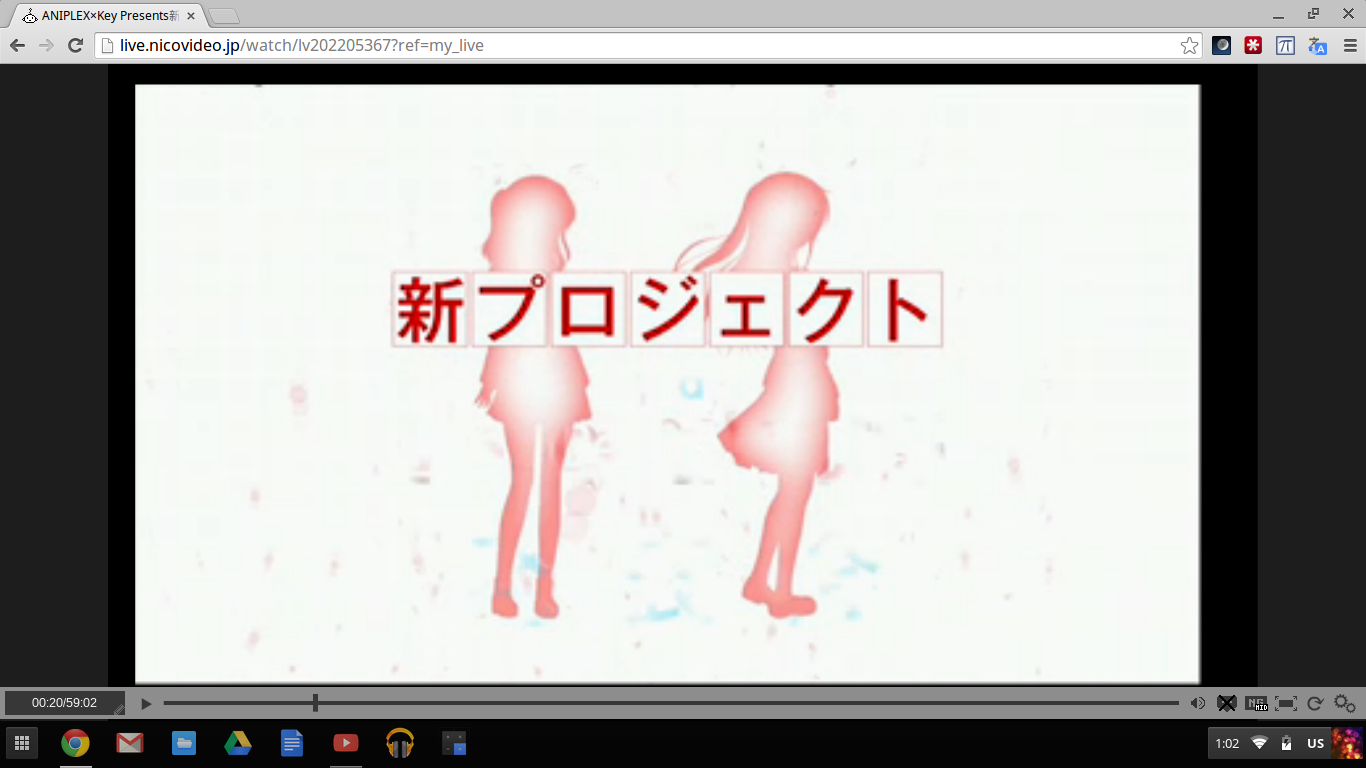 So… odd that that was the only place she was shown, and only for a second or two. See posts below

The music is so good, I cant wait to hear more of it. Its all over the place and messy and absolutely perfect for the mystery that is currently surrounding this project. It reminds me of the track Angel’s Flight from the Angel Beats! OST

Also, I’m not sure the video camera is actually pointed at her, the angle seems a little off to me. My first thought is that it just happened to be sitting there, as if she had set it down before sitting down. But it could also be very symbolic if it was, so I’m not sure.

Oh dang you’re right… welp
Just didn’t look like her from the side/back I guess. But one of the new CG looks exactly like that, so… yeah.

Dude bro that’s a silhouette of the exact image of Kanade that was used alongside the silhouette for the new project son.