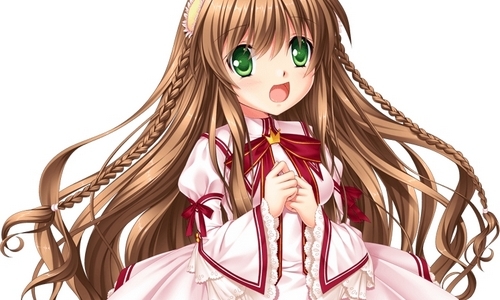 Pre-release discussion and speculation for the upcoming Rewrite anime series! You can use this to share all the latest news regarding the adaptation, and share your hopes and expectations of what you believe the series will or should be like. There are spoiler limits on anything outside of the common route, so if you wish to reference any of this content, tag it with [spoiler]. There are many who haven’t read it yet, and we don’t want to alienate them from joining the conversation here either!

But personally for me, I’m really really happy that it’s being animated by ANYONE. Seeing certain parts of this VN animated is enough to get my HYPED TO THE MOON.

Rewrite is so inherently fun that the actually valuable bits outside comedy almost don’t matter at all to me- I just yearn for action and hilarity. This is perfect for anime.

Looking at it more seriously, with the weird bits of Rewrite, they could actually do things here to maybe make something a bit more simple and it still work. Won’t toss out the option that we get quality- But man I just want Kotarou being Kotarou.

Akame ga Kill looks to be a pretty faithful adaptation. It only deviated from the source when they ran out of material to adapt. People probably also want White Fox, since this adapted Steins;Gate, which needless to say, is considered amazing.

I’m following the official releases which are only at volume 3 so I don’t know this for sure but in the second half in anime discussions of it I saw lot’s of “Why’d they skip ___” or “That was supposed to happen way later!” or “That isn’t how this went at all!” The one I remember is The scene Mine died was in the manga yet Mine is still alive in the manga apparently. Killing a main character is a pretty major thing . If it was due to not enough chapters they should have done 1 cour instead of 2. Even if Steins;Gate is amazing White Fox might have still screwed up.

Even if Steins;Gate is amazing White Fox might have still screwed up.

The one I remember is The scene Mine died was in the manga yet Mine is still alive in the manga apparently. Killing a main character is a pretty major thing

Probably because the manga is still ongoing, and they probably plan on doing more with her later on. Since the anime was going to have an ending, they had no use to keep her alive. Not much would change if she lived in the anime anyways, considering her current state in the manga.

Sorry bad wording, I meant Steins;Gate is amazing (from what I’ve heard) yet White Fox isn’t automatically always going to make good VN adaptations because of it being good. They might have made Rewrite and it turned out worse than 8bit’s Grisaia. Who knows at this point though.

Well…when you don’t have access to the source material, a terrible adaptation really is better than nothing ^^"

Of course, with my mindset, Rewrite has a very small chance of being a bad anime. I’ve liked all of Key’s works so far. I liked the Little Busters! anime despite the common consensus that it wasn’t necessarily good as far as adaptations go.

This has always been my problem with bad adaptations. Viewers who didn’t read the source material won’t have the same impact as those who did, even if they read the source afterwards.

They might have made Rewrite and it turned out worse than 8bit’s Grisaia.

12 episodes, maybe skipping a route or 2, don’t connect anything at all just jump from route to route. Not saying they would have done this but it is possible.

I’m surprised at several of the comments in this thread. Perhaps I shouldn’t be, but I am.

People wonder why Maeda, Hinoue, and others in the industry suffer from depression and anxiety disorder after looking at forum comments and critiques of their work/adaptations. For every friendly, constructive comment there are several that are reduced to the least common denominator. “Hype! It better be EPIC!!” “This is gunna be SHIT!!” Speculation!

It doesn’t matter that such comments aren’t necessarily being directed towards KEY staff. All it does is build the pressure for everyone involved. Some people cope with it fine. Others, not so much.

Sorry to shout from a soapbox, but I am at a loss for why we, as (mostly) rational KEY fans, can’t celebrate the announcement of an anime adaptation with cautious optimism. I don’t know about you, but I like to leave drama out of my life (and left in anime/TV/movies where it belongs!).

Are you my brother from another mother? Because this sums up what I’ve been thinking pretty damn well.

For every friendly, constructive comment there are several that are reduced to the least common denominator. “Hype! It better be EPIC!!” “This is gunna be SHIT!!” Speculation!

We don’t have much to go by, so most people will just decide if they want it or not, and judge from there.
It most likely won’t be as good as the VN, and the studio is questionable. That’s all we really know so far. Most here don’t seem to even care if it’s good or bad, they just want some animated Kotarou vs Yoshino stuff, or some Sakuya route action.

I am at a loss for why we, as (mostly) rational KEY fans, can’t celebrate the announcement of an anime adaptation with cautious optimism.

Personally, it’s not the VN, so I don’t really care how it ends up. It could not exist and nothing would change.

Anyways, I didn’t comment on here yet, so.
OMGGFHEIALAMSNDJRJRN OMFGGG

WHY ?
Why does it have to be 8-bit behind it ? Why that crappy studio ? Grisaia was one of the worses VN adaptation of all times along with DEEN’s ones (except Higurashi) !

I don’t want to see Shizuru being prostituted, please no, please…

So, umm, Im actually in the middle of reading Rewrite right now. Well, not even the middle, I havent even finished the common route yet, but its just an expression. Anyways. Not knowing exactly what Rewrite has to offer, why everyone loves it, or why so many people think it would struggle as an anime in the first place, here are my thoughts:

Now maybe with a good budget, its possible for them to turn a new leaf. I was seriously surprised this summer season with Rokka no Yuusha by Passione. I couldnt believe that it was the same studio who had done Rail Wars just a year before. So while I have serious concerns, I do believe that there is still a chance 8-bit could pull it off well.

But I really do think Clannad Man has it right here.

why we, as (mostly) rational KEY fans, can’t celebrate the announcement of an anime adaptation with cautious optimism

Im sure everyone remembers those recent tweets from Hinoue. For all we know they could have even been about this, which is why she was being so vague. But really, there so no need to put so much pressure on this.

I can personally attest that all the pressure on Charlotte literally ruined it for me. Even if by the time I watch this it wont be about what I actually expect in terms of characters and plot, expectations can really ruin everything. Theres really no need to argue about whether its gonna be hype or its gonna be shit before we’ve even seen it.

Anyways. Does anyone know what Hinoue is saying 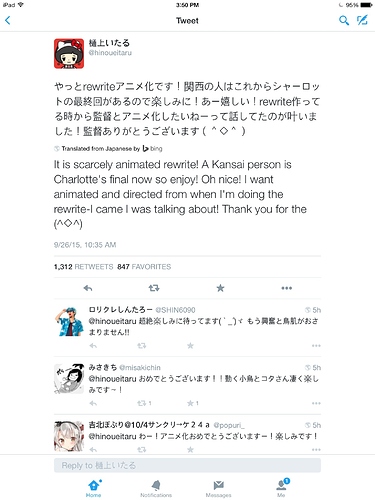 Does anyone know what Hinoue is saying

“It is scarcely animated rewrite! A Kansai person is Charlotte’s final now so enjoy! Oh nice! I want animated and directed from when I’m doing the rewrite-I came I was talking about! Thank you for the (^ DIAMOND ^)”

Well, even if I am cautious about the studio from my previous experience with Grisaia, it shouldn’t make us judge the Rewrite anime before it’s even out. Charlotte may have been a difficult pill to swallow for some but we’re not going very far if we don’t even appreciate the ideas of KEY animes, lol.

In any cases, for a VN that I’ve yet to play this sounds pretty interesting with all I’m hearing about difficulties of adaptation. I wonder how they’ll pull it off in an entertaining manner for both source material readers and anime only watchers.