I wanna test out the translations, but I can’t figure out how to compile a new scene.pck. Can anyone help me out?

Assuming that you already cloned the project or used the “Download Zip” feature in GitHub, extract out the tools (I placed a link to the tools earlier in this thread) into that folder that contains the Scene folder, like this: 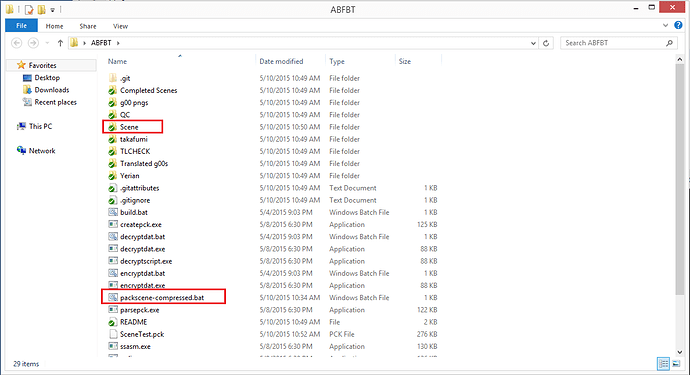 Then run packscene-compressed.bat by double clicking on it.

A couple of things you wanna check, if you downloaded the zip containing the tools a while back, you’ll want to change the line in packscene-compressed.bat from:
for %%s in (Scene\*.ss) do ssinsert-v200.exe “%%s” “Scene%%~ns-str.txt” “Scene\SceneNew%%~nxs”

Since the files on git don’t have -str in the filename. I’ve already updated the zip on Dropbox, so if you’ve downloaded it a couple of days ago, just redownload it again.

Another thing to watch out, is that some of the txt files that have been edited seem to have lost the original encoding. If so, you’ll see some messages if you scroll to the top saying Found 0 lines, expected … when running packscene-compressed. In that case, you’ll have to open up the files that have been edited (as of right now 00_ab01a_day00.txt and 03_ユイ_00.txt in the Scene folder) in Notepad++, go to Encoding in the menu and switch it back to UCS-2 Little Endian and save the files:

When you run the batch script, it will generate a new pck file called SceneTest.pck which you can copy over to your AngelBeats folder and rename.

Thank you so much! Turned out I was using an old version of the tools, and I had to change the encoding like you said. It’s all working now!

How about mouseover or clickable popup (like kanon)? I’d prefer to keep the clutter out.

Unlikely. Kanon was simple and easy to edit. AB is… still simple, but as far as I know, impossible to edit in that way. We only get the text, no code.

A couple of things you wanna check, if you downloaded the zip containing the tools a while back, you’ll want to change the line in packscene-compressed.bat from:for %%s in (Scene*.ss) do ssinsert-v200.exe “%%s” “Scene%%~ns-str.txt” “Scene\SceneNew%%~nxs”

Oh, I’ve just been keeping the -str in the file names… Notepading it would be better in the long term x.x

Definitely this one. Day0 was fine for me though.

There are some typos, and there’s no wordwrap yet. Still very early in

Definitely this one. Day0 was fine for me though.

oh god, what did I break?

@HeliosAlpha, it’s all right, I’ve updated the tools (specifically packscene-compressed.bat) to convert any UTF-8 files back to UTF-16 (UCS-2) so you don’t have to go and manually resave the encoding for each file. Here’s the link again for the tools: https://dl.dropboxusercontent.com/u/58805276/AngelBeats_1stBeat_Trial_Tools.zip

I suspect that if you’re editing the files in browser within GitHub, the text file gets saved in UTF-8 as I believe that some browsers don’t support UTF-16.

I’d have reason to disagree but it’s a long story- But basically she doesn’t strike me as such, and isn’t really how they present her. A lot of what happens seems to be on how the viewer as Otonashi takes those scenes and I think an important part of it is her not being so menacing or overbearing to contrast what the reader knows thus far. THAT’S JUST ME DOE.

That sounds like a perfectly good reason to disagree. I totally admit I’m not a big enough AB fan to have a strong opinion either way and my reasoning only comes down to that’s the feeling I got when I watched the anime, and that impression stayed when I read the VN. In fact, I’d rather you expand on that so I can get a better idea of how to write her lines.

I’ll be less opinionated ignorant once I read your TL and start to QC, but I personally took the scene (in knowing Kanade a bit) that she’s very matter-of-fact but simply aiming to help Otonashi who’s being a bit of a raging bull to grasp the situation, much like how she treats most people who she runs into ie Yusa in Heaven’s Door. Your choice could be totally fine and work perfectly, but from a writing and tone standpoint with her voiced lines and appearance here, she doesn’t strike me as peculiar, simply the situation is odd.

Perhaps to make more sense: I think a major point of this whole scenario is deciding who you want to trust, them both being presented fairly. As such, presenting one side as more or less believable skews the purpose of the reader coming to their own conclusion, and rather pushes them towards one.

Tone is definitely the important thing here. Her lines are very matter-of-fact in the script, so I did try to keep that much at least. I’d have to go back and listen to her voice to confirm, but I’ll keep your points in mind when I have the time to continue again.

She is very matter-of-fact, but I would agree with Biz and say she isnt mechanical. She is kinda presented as such in the anime, but in HD she seems much more human, getting very annoyed and bored and tired of the SSS messing with her, calling her an Angel. (HD light spoilers)She even gets pretty angry and tells Yusa to go away when Yusa, (supposedly having never met her before) comes to Kanade for help.

As Biz said, the important thing is how Otonashi sees her. In the first scene she goes from “The crazy girl with a gun who thinks we’re all dead called her an angel and the enemy, but dear god I hope this is a normal girl who can actually help me” to “Oh, she’s in on it too, trying to make fun of me. Now her matter-of fact-ness is starting to piss me off.” At least, thats the vibe I got.

Basically, she’s quiet, matter-of-fact, and polite. Now, would she use contractions… maybe not, because she’s being polite? I dont know, Id have to go back and look and just how formal she is being.

@ArdWar What instructions are you using to tell the g00 files to cut the same area of an image twice?

I went ahead and added some AB terminology to the day 00 script, and fixed some slight mistranslations. There’s some TLs that were given leeway for personality reasons, so you might want to check it and see if there’s anything to dispute.

I’ve noticed some punctuation errors, and names still need to be TLed, so I’ll do them along with the terminology stuff tomorrow. 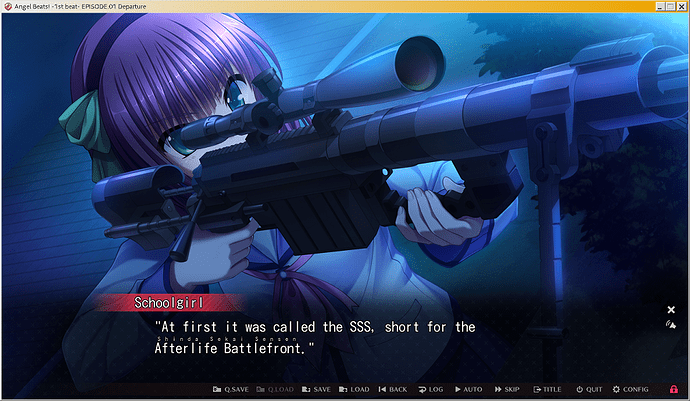 Is there a non-critical section that I can have a try at translating? I’m not particularly skilled, so if there’s an area that’s preferred for testing the waters that would be perfect.

Aside: It seems I’ve been given write access on the repo already.

Yup, I gave you access when you watched it, so that if you ever wanted to try joining in you’d be able to~

Honestly, it came with the png when I decompress g00 files with vaconv.

Oh, I don’t know if those xmls work with the tools I’m using… I’ll try it out though.

Just a quick note, we’ll be moving over to the 1.1 version of Angel Beats, as it is more accessible and has more content. I don’t know if it adds any new scenes (still downloading it right now) but it did unlock some new choices.

It does add new scenes! For one, I know it includes The fight with Tenshi at the bottom of Guild!

Looks like the new version uses a different XOR key, so the tools will need updating for it. We can continue with the old version and just port it over later.

It does add new scenes!

No, I meant, I don’t know if they added new script files. That scene may have already been in, but inaccessible.

No, I meant, I don’t know if they added new script files. That scene may have already been in, but inaccessible.

I’m feeling this way too. There were some instances that I just couldn’t figure out, but it appears they’ve become accessible here. However they did add Niku Udon and Light Drop!