Hey guys! This topic will be used to share information and resources regarding the Siglus engine used by VisualArt’s (Rewrite, Angel Beats! -1st beat etc).

This topic was formerly for sharing resources regarding a potential Angel Beats translation, but since that’s come and gone, I’m re-purposing this topic to be about Siglus engine in general. So, have fun! Maybe we can work towards some fun or interesting Siglus engine backs.

According to the Twitter feed, Kazamatsuri is looking for translators. I responded on Twitter, but I feel that I was not very clear. I would like to participate in the translation project.

On that note, there is something we can do before the game is released. It would be a great help if the Siglius SEEN file was reverse engineered so that translators don’t have to do as much work looking up kanji. As far as I know, this was never done for Rewrite which uses the same engine as Angel Beats. Also recruting a hacker would allow us to apply a translation patch when the translation is done. From what little work I have done, there are bugs in the text rendering code in Siglius that will probably get in the way of an English patch, so we will need a hacker to fix that.

On that note, there is something we can do before the game is released. It would be a great help if the Siglius SEEN file was reverse engineered so that translators don’t have to do as much work looking up kanji. As far as I know, this was never done for Rewrite which uses the same engine as Angel Beats.

This is confusing me a bit.
What do you mean reverse engineered? If you mean getting the script from it, then that was done with Rewrite. The tools don’t work on Holy Breaker or Angel Beats though. I was thinking about getting in contact with the Russian TL group of HB, but that sounds like work… x.x
Oh, and Siglus doesn’t use SEEN files, it uses a .pck, that contains a bunch of .ss files and .txt files. All the stuff you’d need for translation is in the .txt files.

Oh, and aside from wordwrap issues that can be easily fixed, I don’t know of any text rendering issues.

Yeah. Amaterasu has a full set of tools in the Harvest Festa Assembla, but they also have .bat files written to make everything do what it needs to for you.

I don’t think I’d want to post any of those tools and things without Ixrec’s express permission, but someone may be able to persuade him to give access to whatever they used to get into Rewrite and HF’s files.

Yeah. Amaterasu has a full set of tools in the Harvest Festa Assembla, but they also have .bat files written to make everything do what it needs to for you.

I have the Rewrite versions, but I have no idea how to actually work with them, so making them work with newer releases is beyond me~ ^^;

Well, if anyone wants to get started, all the images that need translations are here.

I mean why not. I’ll see what I can do

document
Edit: It might be hard, for people who aren’t me, to find stuff but all Japanese text is there now.

Wow, this is really happening isn’t it :o

I did a quick test to see if my rldev tools still work on Siglus.

Wrote down the process too~ RLDev for Dummies

This is sweet! Consider me at your service for the extent of my ability- QC work.

Okay, well a few images have been done, and Helios went on a TL-ing spree, so I think we’re off to a good start.
I’ve noticed there’s a problem with some g00 files that use multiple overlapping layers, ef_bg_name_cutin as an example. I’ll have to see if I can find a way to export them correctly.

Do you mind explaining the steps of how to go about creating a folder and moving files to it that we want to translate? Im really eager to help, but I’ve never done anything like this before.

I don’t think I’d be much help as far as translating goes, but I’m up for QCing.

I’ve added you as a collaborator. You should be able to add new files to it using the github client… I think.

So… What exactly is lacking in terms of unpacking and repacking files and scripts? Like can we do images, but not scripts? Or can we do everything, but not perfectly? I’m honestly curious about this~

We can do most images, apart from some special g00 files that I’ll look into tomorrow evening (Tuesday. Haven’t slept yet.) These g00s have multiple images, but they are all on top of each other, so exporting it just gives you the top layer, and you end up with only one image. I’ll either have to find a new way to export them, or I’ll have to manually recreate the images. The second option will probably be quicker.
I’ve been looking into tools to unpack the script, but a stupid amount of time has been spent freeing up space on my hard drive that has nothing but a windows folder on it T_T
I can hopefully get that sorted out tomorrow too. If not, I’ll have to see if I can around other TL groups.
Gemot Encubed hasn’t been accessible to me recently, so that’s out of the equation.

I wonder if other TL groups might know what to do about it. Rewrite and Harvest Festa aren’t the only games running on SiglusEngine, after all

This group, for example, is translating Hatsuyuki Sakura, which also runs on SiglusEngine

Aaah, it might be worth talking to the Visual Novel Society then. I don’t know if there’d be much help on extraction, but I think they had re-insertion nailed down some time ago.

As translating g00s are hard translation, are there any style guidelines?
What font face, size, kerning, etc. Maybe I can help on image editing.

About layered g00, are there any example?

I’ve just been finding fonts that were fitting. For the character mugshots that I TLed I used Simhei size 15. For the location cutins, I used KaiTi size 36.

An example is ef_bg_name_cutin. The g00 looks like this: 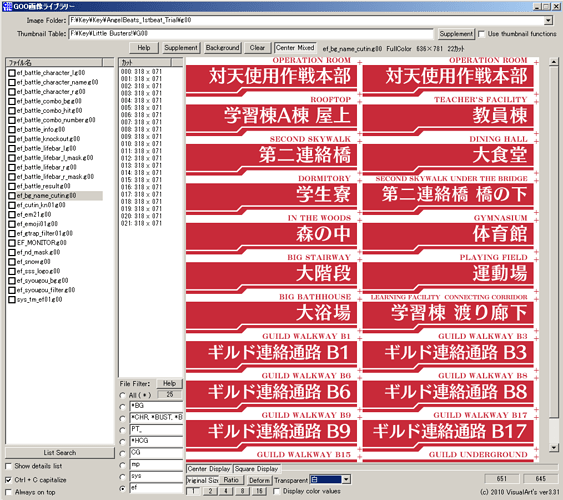 However only the last one is extracted by vaconv, the guild one.

It’d be easy to just make the rest of the g00 from scratch, but it’s annoying nonetheless.