Pretty sure I did unless I typed something wrong. 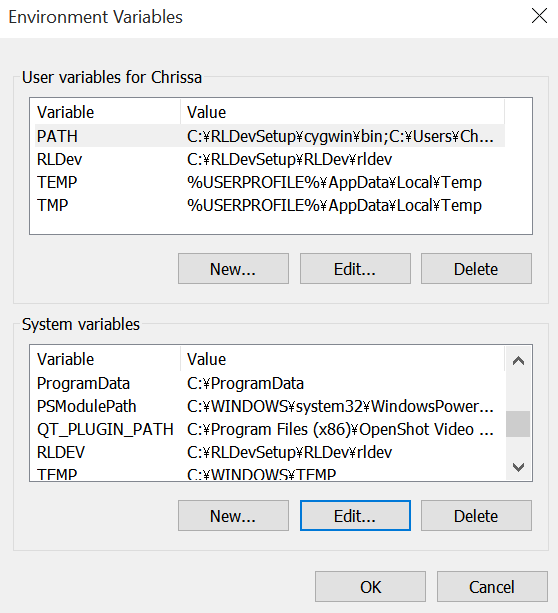 Kprl still does nothing. What am I doing wrong?

Does other commands work? Like ocaml etc.
Make sure that you added Cygwin’s path to the PATH variable in the System Variables, not the one in the User Variables, that could be the reason behind the problem.
Also, does the contents of the folder you entered in the RLDEV variable look like this? 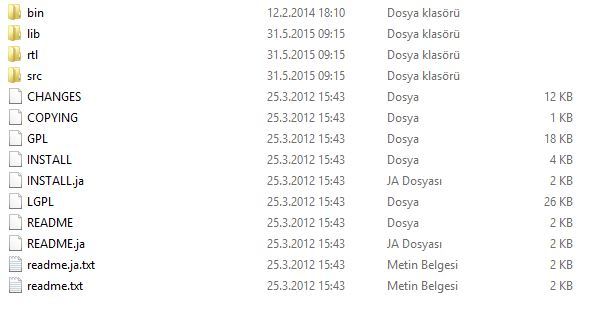 This error is due to having a newer operating system. While I encounter an error like that, this never caused any problem to me, despite running it on Windows 8.1 64-bit. I can run all the RLDev applications without any problem.
I suggest installing Windows XP or 7 via VirtualBox or Dual Boot method. When you have to disassemble/assemble Reallive archives, you’d switch to XP/7, and when you have to edit the files you got, you’d switch to your current OS (if you’ll install Win7, you won’t even need to switch, as it’s a decent OS, you can use everything you want to).

Thank you. Sorry that this reply is late.

Planetarian HD Edition is built on RealLive engine’s 1.6.5.9. version, and I think the scenario files could be extracted. However, RLDev gives this error when I try disassembling the SEEN file:

Is it because the file’s encrypted, or they have used different commands/opcodes that RLDev can’t recognise?

I did a little update. It just explains how to put all your loose .txt files into a single seen.txt. Totally forgot to add it originally. Should be handy for anyone who wants to cleanup after adding stuff like the Kanon all-ages patch or the Litbus Suginami patch.

Hi Taka, I was able to do the whole process, but in the final part in the installation of omake I get the following error.

Hmm, can you rerun the cygwin setup.exe and check for libpng? You might need to install a different version. If the libpng14 from the guide isn’t working, you might need to try 12 or 16.

Writing a Visual Novel with .utf and .org files

Writing with RLDev is incredibly simple so long as you take the required steps. First you’re really gonna want to set up a template. Every line of text in your script will be preceded by a number in between two angle brackets (<0000>) and each presentation of that text in your code will be formatted as #res<0000> followed by a pause. Writing this all out is very tedious, and unless you’re a notepad++ whiz you’ll spend most of your time on this basic formatting.
Luckily you have little old me to save you~ Here is a template. Just scroll to the bottom of the page, copy the raw paste data, and save it as a text file. In Notepad++ you can alt+drag to select an area. Use this with my template to copy the <> numbers and easily paste them before your story script.

Once you have that done, we can look at how to code.

In most cases you will be using two files to make a seen. A .utf and a .org file that share the same name.
In your seen0001.utf you’ll have your story script:

The .org file is much more complicated, as that’s where the insides of the game are kept. To simplify for this introduction, I’ll go over the core structure.

These are how the res tags from the utf file are used. By typing this line, the game will present the text of the specified res tag.

The most important thing to know after that is @ tagging. @ tags are areas in the script you can jump to at any point in time. You should place one before each scene as such:

Once an @ tagged scene is complete, it will naturally proceed onto the next tag unless told not to. You can make a scene jump to a different @ tag at any time with goto @68

The second most important thing to know is Flags. Flags are variables that you can set like a switch. The game will remember if a switch is on or off, and you can change it at any point. This is extra important for modders because you will see flags everywhere in a script. A basic flag looks like this:
intF[100] = 1

Beyond that you’ve got the aesthetics.

After a line of text’s pause command, you can place this to have a sprite show up during that line of text:

Replace NONE with the name of your sprite’s graphic. The NONE you replace determines the sprite’s position on screen. And yes, you can have multiple sprites on screen by replacing multiple NONEs.

To start a seen, you’ll almost always want to start with something similar to this:

I think those are all the basic commands you’ll need.

Branching the story with choices. 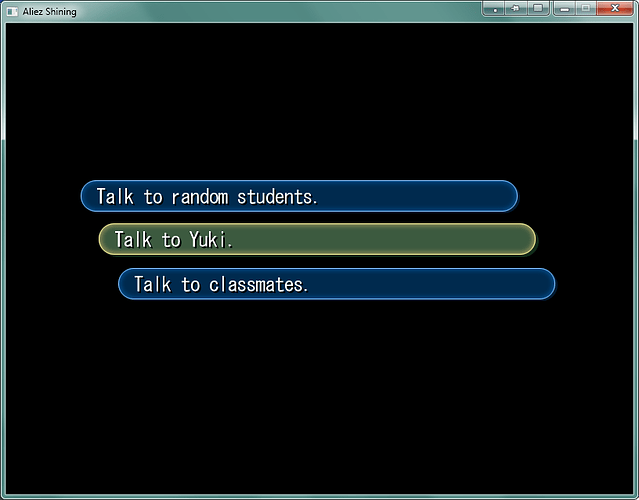 If you want to make a real Visual Novel you’re gonna want choices. We aren’t looking for any of that Telltale rubbish where the choices don’t change anything. This is how to make a long lasting change to your VN.

In this example, I am working with a tutorial scenario. In the scenario, little old Taka is searching for a schoolgirl killer! You must decide on where he gets information from, and depending on which information Taka gained, future dialogue will be different. Due to this being a tutorial I will make all of the scenes short and simple. Once you understand the method, you can use it in large complex branches if you so wish.

First in my .utf file I set up the choice text.

I then have my different branches written out one after the other.

Note that the order of my choices don’t match the order I’ve written the scenes. You can put these scenes at any point in your script and it’ll be fine. If you suddenly decide to add a new choice, just write it onto the bottom of your .utf.

Over in my .org file is the scene written as such:

My @13 begins with a goto. This will send you to the scene of my third choice if intF[1350] doesn’t equal 1. If the user picked choice 2 they will stop here. If they picked choice 3 they will go to the next @ heading.

Simple so far. Our branch should work at this point, but there are two problems. One, we haven’t reconnected it to the main story. Two, we haven’t set a dedicated flag for this choice.

Reconnecting the story is simple. Once your scene has completed, put a “goto @” aimed at the @ header following all of your choice scenes. My final choice scene was @14, so the connection point would be @15.
As I mentioned previously, I decided to have my choice 1 scene link to the choice 3 scene. This was very simple. At the end of choice 1 I typed “goto @14”

Now how do we make this choice something to be remembered? Well, you’ll need to set aside an IntF variable. I like to choose easy to remember numbers, so I picked intF[50]

Then comes a future scene. In this scene Taka is asking for information, but the information he asks for changes depending on which choice was picked previously.
I write a scene in which Taka knows the killer’s name, and a scene in which he doesn’t.
These look like:

The branching moment occurs on this line in my utf, under the @17 header:

Following that line in my .org I set a goto command.

The scene ends with a goto @19

And with that, my story has rejoined back to the common route. The flag intF50 will be set to either 1 or 2 until I change it later, and you can reference the flag later in the same way should you wish this choice to have future impact. The great thing is that, before beginning any @ scene you can simply put a goto_unless(intF[50] == 2) and it’ll automatically skip the scene if the person hasn’t triggered the required choice. Just make sure you note down all your intF variables!

Hi Taka
I have tried using vaconv, but I get the error that a dll file is missing.
The file is cygpng15-15.dll, according to Cygwin itself this file is no longer available for download and was replaced by the libpng 16
Is there any way to fix the problem?

I think I’ve seen this problem before…

You could try doing this:

First, download this and extract it to cygwin\usr\local\bin.
Then replace your rldev folder with this.

and then downloading this:

I found a fix to that png problem you were having. It looks like I mixed up my two rldev installs, and put up the wrong version of vaconv. Here’s a fixed exe.

Good night Taka
Another problem I have is when I put .g00 in the game this does not read it to me.
But in the viewer if you read it.

(I took the png from your folder, I hope it doesn’t bother you)
It is rare because if you can see the image when the voice is off. 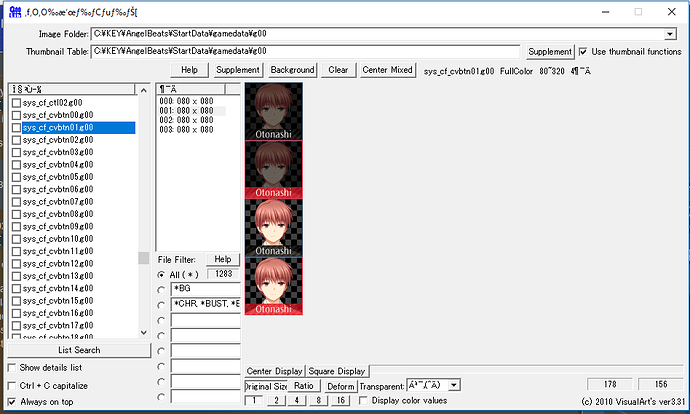 I’m guessing you followed my steps, but to be sure, did you use g00pack or vaconv? Did you include the relevant .txt/.xml file?

Also do the g00s from the translation folder (such as that Yuri one) work correctly?

Yes, if I can see it individually.

I used g00pack and included txt.

I just proved that the g00 of the translation folder work correctly.
I see that these have 8 frames and not 4 as in the tutorial.

Oh right, I think I remember now. This is a problem with my tutorial image not being true to the game’s real state. I’d edited the game to remove the clone frames.

In the actual release of AB they doubled up the animations for hover over and clicking. If you check one of the g00’s in g00lib you’ll see they have 8 frames instead of 4. 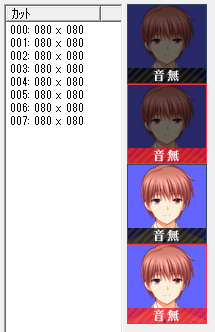 In AB’s case, since the files were part of a group project, I just doubled the frames in Photoshop so anyone could use them. For solo projects I’ve just edited out the redundant frames in the code. There’s probably a way to clone frames with the text file too, but I’d have to check g00pack’s documentation…

So basically the reason you are getting blank frames is because you’re missing half the frames.

Do you have any other tool to compile Angel Beats !?
“Createpck.exe stopped working”
I tried to use it in the trial version and I get that error when compiling on day 3.

The compiler for AB1st trial is here:

@HeliosAlpha, it’s all right, I’ve updated the tools (specifically packscene-compressed.bat) to convert any UTF-8 files back to UTF-16 (UCS-2) so you don’t have to go and manually resave the encoding for each file. Here’s the link again for the tools: https://dl.dropboxusercontent.com/u/58805276/AngelBeats_1stBeat_Trial_Tools.zip I suspect that if you’re editing the files in browser within GitHub, the text file gets saved in UTF-8 as I believe that some browsers don’t support UTF-16.