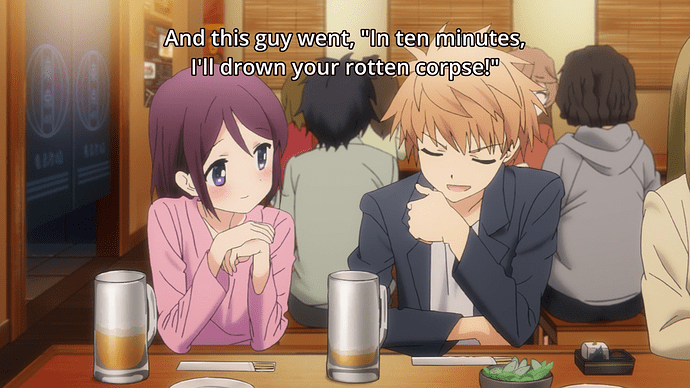 Yoshino Haruhiko is only behaving weirdly so that Kotarou can tell funny stories about him and pick up girls that way. He is a bro among bros.

When I randomly saw the video clip that came with this tweet, I knew I wanted to make a Star Wars reference on this one, so here’s the theory:

Kotarou: “No, I am your father.”
Shizuru: many NOOO 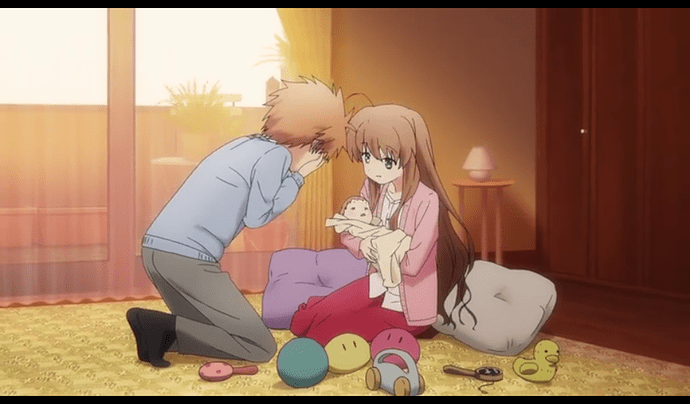 Based on that picture… what if Rewrite = Clannad? well atleast that what i get when i see that pictures

Here’s another one for Rewrite (post-common early-game spoilers): Kagari is searching for good memories (yoi kioku), right? What if all she ever needed to see to stop Salvation from happening was… Yuri!!! on Ice??

Dunno if this counts as sh*tpost theory, but I have a baseless head cannon for Clannad, I don’t know if the VN has details that totally shoot this down, but the anime always made me think

that in the alternate timeline where Nagisa lives, Sunohara and Tomoyo would have gotten together, like down the long road, once Sunohara matured

I can actually see this happening and if you want to count the movie,(Clannad Movie spoilers) there was another alternative universe where Sunohara and Tomoyo kind of got together. .

Many routes and stories of Key are centered around topics such as tragedies, death, and dealing with the loss of loved ones. Those stories have been written with a very specific goal in mind. It was not just to show us fictional characters go through devastating experiences or to make us cry. Ever since Key was founded, its writers have made the utmost effort to make a connection to us readers in order to nurture us, to strengthen us, to prepare us for a tragedy that would befall us in the (hopefully very very far off) future: events such as the death of Jun Maeda and Key closing down as a company. For only with the lessons learned from their stories would we be able to stand back up when the world as we know it comes to an end.

I was thinking of some wack crap stuff when suddenly I might be on to something.
With the release of little buster English right around the corner it made me wonder how exactly old is little busters? 2007-07-27 which is also right around the corner… release date for 10th anniversary? puts tin foil hat on its also keys anniversary in july puts another tin foil hat on Hopefully its just another wack crap theory cause I don’t wanna wait that long.

Theory: Charlotte and Code Geass are in the same universe, world and even timeline

(Spoilers for Code Geass and Charlotte)

There is the obvious fact that Lelouch and Yuu look very similar, but they also acted a bit similar, in that they were both kinda jerks who had no problems taking advantage of others. They also share similar poses, as shown below. (Sorry for the image formatting, best images I could find of roughly the same size) 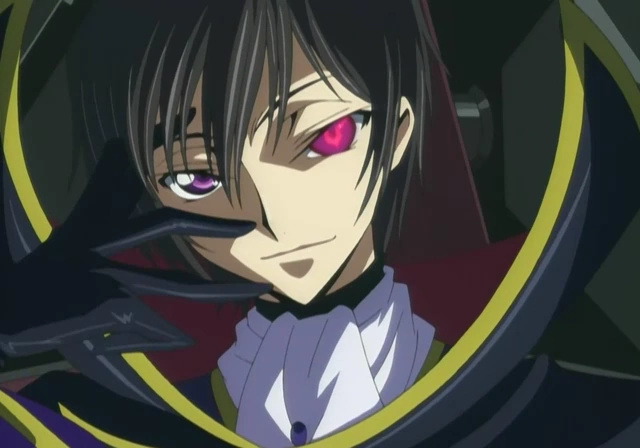 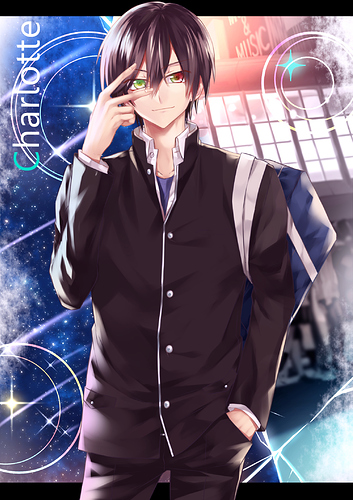 In the last episode of Code Geass Suzaku killed Lelouch, thus he had (at least to our knowledge as of the year 2017) actually died after being killed via Suzaku, who became the new Zero. Given this, Yuu could be Lelouch reincarnated. It would also explain why in the first episode, Yuu seems to have similar powers by mind controlling some hapless truck driver for his own selfish desire. Later on, it is revealed that Yuu actually can copy others abilities by possessing people and use them as his own, which could be seen as an evolution in Lelouch’s original powers.

It goes further than that, as Yuu also has a little sister and while she isn’t necessarily blind as Nunally was, the fact that he has a weakness for his little sister could also be seen as a point in the favor of him being a reincarnated Lelouch.

I think the reason why there wouldn’t be anything setting wise to link the two is a grand conspiracy. After the events of Geass, it is likely that Suzaku wanted to erase the knowledge of all the events that had partaken, which makes sense seeing how Suzaku was partly responsible for the bombings and killings himself that occurred. He could also be stricken from having to kill his best friend Lelouch and all the previous trauma from the war, so he could just try and live in denial like it never happened. Now the official explanation for why they were seizing people with powers in Charlotte was because they were using them for scientific research/exploitation, but this could all be part of suppression in case someone like Lelouch does ever come back.

(Very minor spoilers ahead for a couple Code Geass games, pertaining to the protagonists of that games powers just in case you wanted to go in blind)

The similarities and overlaps don’t just end there, as there are a couple games called Code Geass: Portrait of Despair and Code Geass: Harmony of Ruin that has a protagonist whose name is: Charlotte Di Britannia. Just another interesting coincidence between the two? Well you would think so, EXCEPT this part from the wiki (which you can visit here if you’d like http://codegeassfanon.wikia.com/wiki/Charlotte_Di_Britannia):

“Charlotte has the ability to bestow people with the power of Geass.”

The comet Charlotte in the Charlotte anime did something very similar, so this may not just be an interesting happenstance. Charlotte Di also has other interesting powers, such as:

“Her connection with Geass allows her to detect those people with the ability of Geass. The extent of this ability is unknown, but it does allow her to detect the location of her own contractors, even at a distance, and confirm who does not possess a Geass, regardless of whom granted it to them.”

There have indeed been powers bestowed onto a character in Charlotte that can locate other people with powers, such as Kumagami, who could locate people with powers themselves. Given all of that, the similarities in the protagonists of both Code Geass and Charlotte, the amounts of potential coverups going on and other various correlations between the two lead me to believe that these two animes are in the same world, just at different points in time.

Isn’t this a complete rip-off of Code Geass then marvelous coincidence?!

Can someone put this in “Try to anger as many Key fans as possible in one sentence” for me please?

That’s actually a good theory considering that is how the city of stones was created.

@Echo Key is the Illuminati, and Inoue left to form MJ12 and has recently captured JC Denton, codename Maebatame… Wait, which game is this???

You missed the obvious, how many letters are there in KEY? 3…

Oh noooooo! how could I not notice that

In Saya’s route, the reason all the executives meow upon death is because they’re actually just a bunch of acts bundled together in a black bodysuit and school uniform. You’re shooting rin’s cats.

What if (Angel beats/clannad spoilers) the dango daikazuku are the true gods that created the afterlife in angel beats! mind blown

What if Little Busters(Little Busters! spoiler) the entire plot is a Riki’s dream when he is in hospital after his parents death.