Hi everyone! In an effort to rekindle more fun and crazy stuff in our community, I would like to present to you our next Kazamatsuri event: Our very own forum version of The Resistance! For those of you guys who have been paying attention to our other fragment, Rokkenjima, you may have noticed that some of the more active topics involve gameboards where people play games that involve deception between two teams of players. Well I’m bringing this to Kazamatsuri with a game that I’ve been enjoying a lot with my friends over here. So without further ado, let me introduce this game to you!

After another tiring day of Baseball practice, you, a member of the Little Busters, start preparing for the good old nightly mission set-up by your leader, Kyousuke. Excited as you may be, a few hours before today’s mission, Kyousuke gathers round the Little Busters and makes an important announcement: the members have been infiltrated by lackeys of the Student Council! While you know that it is the duty of every Little Buster to ensure a mission’s success, these lackeys, hidden amongst yourselves, aren’t as cooperative as you would expect. In order to unmask these traitors, Kyousuke puts a new scheme in place, hoping to once again stop the council from their duty as Little Busters.

(for a more detailed description of the rules of The Resistance, you can check out the Wikipedia page.

The Resistance dictates a minimum of 5 and a maximum of 10 members for playing. Therefore, signups will be open until 5 members post here stating their interest, which I will then leave open for one week. Once a week passes, or 10 members apply, I will be closing signups and starting the game shortly thereafter. 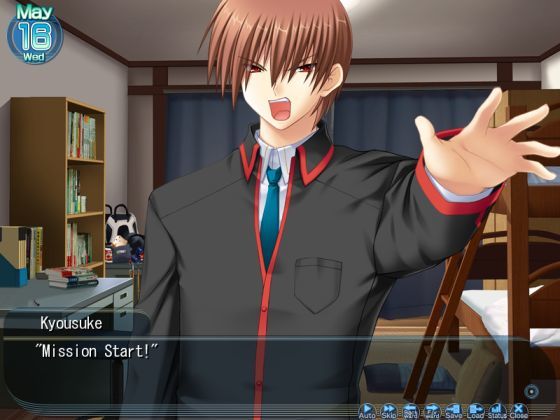 Of course I’m in

Might as well jump in before all the spots are gone.

Gotta get in here now that I have a chance. I’m gonna role-play if I get a character I think I have a slight affinity with.

I was absolutely not threatened to join this and do not fear for my life if I don’t. Roleplay should be up my alley for once, so I’ll be joining. :kgoha:

Disclaimer: I have never even heard of this game before so please bear with me as I do my best to understand it. I just enjoy the notion of RPing something related to Little Busters~!

Glad to see the reception for this going well :kgoha: one more slot left, guys! If nobody else joins within a week, I’ll start the game with 9 players

That aside, if you have any questions about the mechanics of the game, feel free to ask. If you have no idea how forum games like these go, you can check out the currently-running “Secret Oyashiro” over at Rokkenjima

Yes you can, and that makes 10! Wow that was really fast

hang on a minute while I prepare all the things necessary: your roles, alignments, missions, and leader orders~

is role and alignment independent?

Aww, I saw this too late. :komue: Maybe if you do another round.

is role and alignment independent?

The roles you play are not attached to your character’s allegiance, in any way

Appears to be the case.

Just to confirm, yes, roles and alignments are independent and are not attached to characters. Once we start to add characters with skills (a la Avalon), we’ll have to be more mindful of the attachment… maybe

Alright, as you might all have noticed, I’ve sent each of you a PM detailing your roles and the characters you have been assigned. All assignments of roles and characters are completely random.

The leader rotation is as follows (also determined randomly):

And without further ado, let us start the first mission! Mission possible (but difficult task) plays in the background The first mission is… Infiltrate the school at night, and find the rumored “board game clubroom” containing an assortment of toys and games, since shutdown by the Student Council.

@Glenn_Irish as the assigned leader, your job is to select 3 players to partake in this mission. Feel free to decide by discussing with other players; or not. after all, you have the final say. Once you have decided, tag me in your post with your selection of your 3 members.

Should your selection of team members be approved in the voting phase, your team will move on to the mission; otherwise, the next in line will be assigned as the leader for this mission.

Understood.
I’m playing as Nishizono Mio. I usually would rather not participate in something like this but because it happens to be indoors I might as well go myself this time. Could the other players please introduce themselves to give me an idea of who would be a good candidate to bring along?
お前ゲロ犬

Anyone who’s known me for long enough knows my general distrust for the student council, and I’m always willing to throw a few marbles in their path to help you guys. I hate to be bored, so I would like to see some bright smiling faces from the rest of the team! Don’t forget to introduce yourselves as we jump into our first mission!