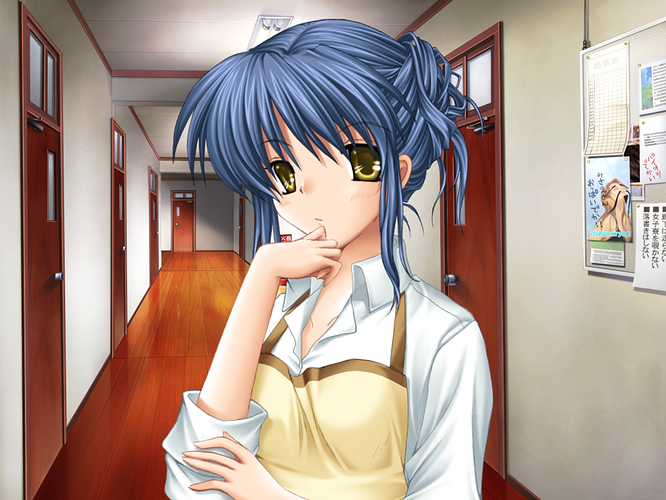 Discussion topic for Misae’s route and character from CLANNAD. Please tag references to any events outside of Misae’s arc and the common route of CLANNAD with [spoiler]. Her birthday is the 3rd of April. Refer to the Katsuki topic for discussion of his character.

This topic also hosted CLANNAD Bookclub discussion from this post onward, and was referenced in our Misae Route Podcast.

I really quite enjoyed Misae’s route. It was short, but very bittersweet. For a side route, it was more memorable than some of the longer routes

Excited to read it again once Clannad is released iternationally

I never really enjoyed Misae’s route.
Misae as a character?? Totally awesome. I love her.
But her route was just a little meh.
Although it was really enjoyable to see other characters at the school that weren’t Tomoya and the gang.

I just read the scene where Nagisa asks Misae for love advice. I read this one as I read Ryou’s during the first time and I liked Nagisa a lot more. I’m not even sure exactly why I like it so much there was just something touching about Nagisa working up courage to talk about Tomoya.

How do you get it so that the person going to Misae for advice is different? Is it just going through their routes part way before going calling it quits and sticking on the Misae route? Ryou’s was pretty entertaining but in more of a schadenfreude way than a touching one.

I’m just following the guide on the site so I don’t get the wrong route my mistake.
From April 15:

I feel concerned (to get Nagisa scene; other choice gets Ryou scene)

So I just noticed something interesting in the dorm room while going towards misae’s route:

Well, boys will be boys.

So I just got Misae’s bad end and I just thought it was heart-wrenching to see Tomoya so indirectly rejected like that. Out of all the routes, I guess Misae’s is the only one where Tomoya makes an active effort to “get the girl” so seeing him lose like that was quite sad :komue: 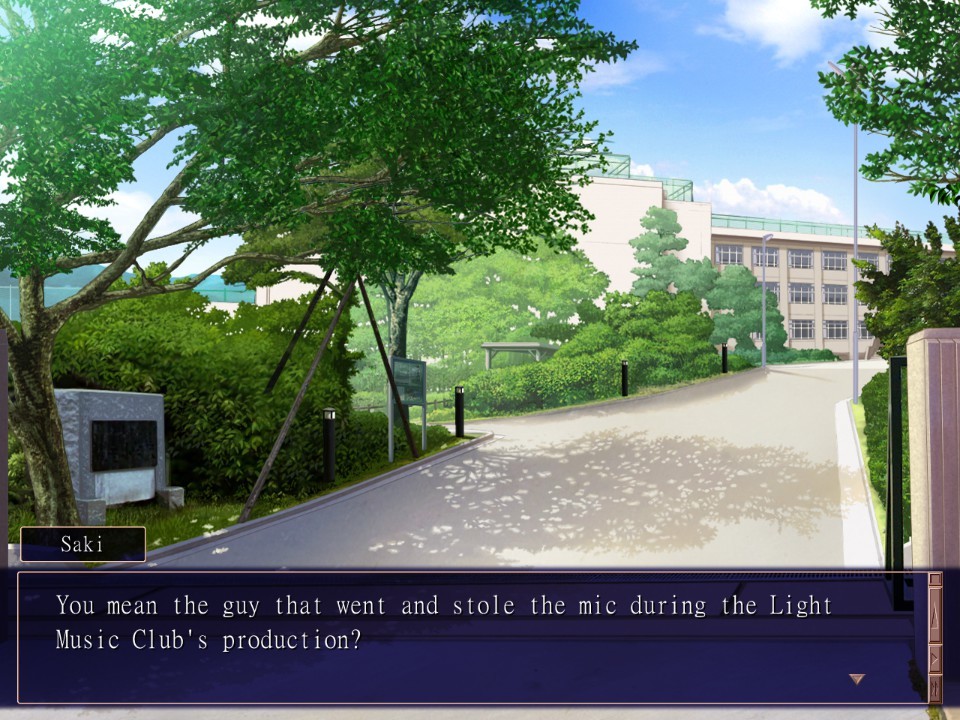 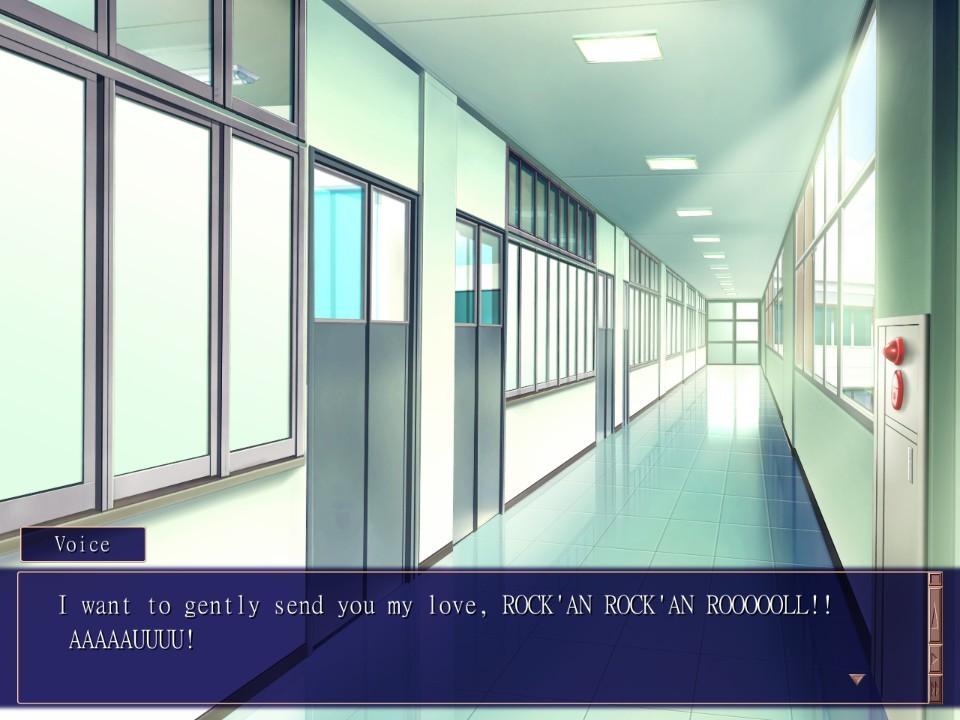 Yoshino’s mentioned multiple times in this route, it seems.
Such a gentle way of sending someone your love.

I think this route has a sense of belonging at it’s core. Like, Misae and Katsuki(cat) ended up, unknowingly, spending their lives with their loved one in a place where they’re really needed. When looking at the story from a chronological order, there are a lot of things that repeat over time. And that makes me think this is how things are supposed to be.

My only real qualm is Tomoya hitting on a woman that’s [CRASH!] years older than him. So I’m gonna make my own little head-canon that it’s Katsuki’s emotions being reflected in Tomoya’s mind. In order to tell tomoya the story, Katsuki has to create some psychic link with him. And in the early stages of this his emotions are affecting Tomoya. Kinda makes sense with how the scolding, worrying and smell thing gets repeated.

[quote=“Pepe, post:11, topic:1951”]
btw it says “Misae-san oppai deka!!” and “Paio dekai”
[/quote] Hmm… We said this wasn’t Sunohara but he does use the phrase “paio”, and talks about drawing mustaches on people when trying to threaten Tomoyo. Maybe we overestimated him.

Isn’t she only 23? That wouldn’t be too much of a gap in personal development to rule out a relationship completely. And she’s pretty attractive generally, considering her high power level and all.

It’s like an anagram. (おっ)(ぱい) -> (ぱい)(おつ)
So yeah, considering Sunohara’s very cleverly encrypted secret language, you can assume he was the one to draw it, hah.

She’s somewhere between 23 and 99. She gets happy when Tomoya guesses that she’s had the cat for only 5 years, so it’s obviously longer than that.

But after that she explains that the rugby players’ comments of her being in her thirties or being too old to get married aren’t true.

28 still sounds kind of late to get married, to be honest. I thought her being happy was just because she keeps getting told she’s old.

And well, considering Yoshino and Fuko’s sister seem to be in the school at the same time Misae is there, you could pursue some deductive reasoning on that part if you really want to.

Misae is a fairly average character, her most outstanding trait is her infinite patience for the bullshit of the Rugby Club and Tomoya, and aside from that, her just, in general ‘perfect’ aura, she’s cheerful, nice, smells nice, and helpful just in general. This is, in a sense, the biggest flaw with her character, with such a solid core to it she has no real conflict to shake her character up, even in the past, she only one gets really upset over something, and it takes only one scene to spring her back to full force.
She’s aight, but not tooooo intresting.

Like the character, the route is…flawed. Tomoya gets way too into Misae with way too little provocation, one scene he’s telling her to drop kick people and next scene he’s gushing over her oppai, I found it really jarring and not solid at all so I’ll just chalk it up to mommy issues and move on.

Whoops Nagisa stole the route just like she did common, I cannot wait for her route.

I really have nothing to say about the the flashback story, it’s a nice story and stuff, but what is it’s point to Clannad, it has nothing to do with Tomoya, the only real purpose I can think for it in the long run is showing the power the light orbs have
Also if you really push your luck, Misae/Shima has parrelels to Tomoya/Nagisa, the former are aggressive, confident in conversations And have blue hair and the latter have determination to see a certain goal finished, but lack the strength to do it alone without the former pushing them.

I must say though, that Shima’s crying lines in his last scene with Misae are amazingly voiced, like that is some absolutely solid 10/10 voice acting there, totally genuine sounding!

Cute short story that I struggle to find has a connection to Clannad as a whole, worth the small amount of time it asked of me, I give it a Nice Smelling Futon/10.