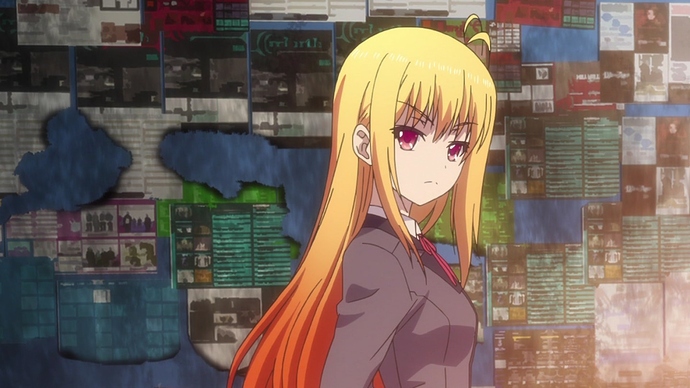 Discussion topic for Episode 3 of Charlotte, which first aired on July 18, 2015. All references to outside works and to future episodes must be tagged with a [spoiler] tag.

This topic also hosted Charlotte Anime Bookclub discussion, and was referenced in our Episode 3 Podcast.

I wanted to see a little bit more… (which probably means it is a good episode).
Subtle spoiler: Nice new character(S)!

For some reason during this episode I kept thinking of JoJo’s Bizarre Adventure. Maybe because I just starting reading Part 4 and that part specifically is so similar to Charlotte.
Anyway this was still pretty enjoyable and I thought Yusa was already at the school just was busy touring or something so that was a bit surprising (also yay water guy context!) I also liked that threat with all the people threatening the manager.
Does Misa’s power have a downside though? I don’t recall anything being mentioned and I couldn’t see anything (she can even stop it when she wants).

Does Misa’s power have a downside though? I don’t recall anything being mentioned and I couldn’t see anything (she can even stop it when she wants).

It seems that the flames appear to be very weak? The building is untouched by the flames other than the marshmallows, and they deliberately make two of Misa’s friends get hit by the fire instead of the guards they replaced, who seem to be unharmed afterwards.

I thought that at first but she mentioned burning down the idol place so unless she was going to do it with matches or was just talking out of rage that doesn’t fit. Even then, her flames being pretty weak still seems like a much better power than constantly running into walls or collapsing to take over someone for 5 seconds (and getting hurt from the fall and any damage they take) or being possessed by your sister and having no knowledge thinking you just fell asleep.

Does Misa’s power have a downside though?

Good point. There’s no visible downside to his own power… yet.
But, there is a downside: Her sister’s “interventions”. Because she doesn’t have control over that.

Update: Oh I’ve confused the girl’s name… I’ve thought you were talking about the singer. I’m bad with names.

Best episode till now. The way they introduced Misa and Yusa was just perfect. I love the diffent personality between the two sisters and we already got some backstory of Misa. I wonder how both of the powers will turn out and how they will be used for the cause of the student council. I made tons of screenshots of this episode and I will be posting some in the screenshot thread.

Actually, that was the plan from the beginning… They were wearing fireproof clothing… they planned the whole thing so that the agency dude wouldn’t try making Yusa’s career end. Also, the fire isn’t actually week, in the building, the fire’s were only there for like 5 seconds. You need it to be there for longer if you want the building to be burned. She could possibly have a complete ability.
But I liked the episode, the confession scene was just beautiful, in my opinion, and sad at the same time. But, my understanding of the ED is getting mixed up. What was the purpose of the song ? I’m pretty sure that it isn’t Aoi Tada’s voice…

You need it to be there for longer if you want the building to be burned.

It was long and hot enough to cook marshmallows, that would more than singe a piece of paper.
But anyway, I guess Misa could just have a complete power because she’s dead or something. She might not have had the power when she was alive.

Jesus christ what a disaster.

“what the fuck did you just say about me, you little bitch? let me just absue the shit out of my powers with seriously no provocation so you can see that they exist”
“Man that sure makes me, Joujiro, whos job is to exposition(and to make the same gag over and over), life easier”

“LOOK AT THIS DEEP RELATIONSHIP THE THREE OF US HAVE HAD AND IS VITAL FOR THIS SCENE TO BE A DRAMATIC, just trust me it happened seriously you gotta believe me HAVE FEELS PLS”

SHOW. DON’T TELL. You can not just tell the viewer these characters have such a relationship that goes back far and that this parting scene has weight, you must show, these guys are god damn NOTHING because you gave them absolutely no filling, with no character involved in your dramatic scene, it lacks any sort of impact and has no reason to be there, you’ve just wasted time to accomplish nothing but embarrass the writing quality of the show and maybe give some 13 year old feels.
That said, I’ve been complaining about pointless ‘showing’ just above this, so who even knows maybe that would have been a god damn mess too.

No, it’s never going to be good. the evidence just keeps suggesting that Maeda is incapable of writing for Anime, which says nothing of his ability to write for VN’s by all means, but this isn’t a god damn VN.
I will of course go to the end, but it’s had more than enough chances, it’s got a steep god damn climb if it wants to earn respect back.

…using all of their powers together was cool.

Nice episode, screw that guy for punching Naonao, what if the camera had broken?!

Also, why does Misa even still have her power? Aren’t they somehow tied to the brain? And Misa’s brain isn’t in Yusa’s head, is it? Or maybe I’m just stupid, that’s always a possibility^^

First watch, I gotta say this was pretty weak. I’ll have to watch it a few times more before I solidify that and all but I’m kinda mixed here. Some stuff in this episode was just weird…

At any rate, confirmed Yusa is disgusting but Misa makes her great. Good play, there. Also can applaud really good worthless side-character designs from NaGa. The bros here looked really unique to me. I’m glad, despite them obviously being worthless, his design has been so balanced since AB, for lack of a better way to say it.

Oh and the ED was neat. Hobo jacket OP.

I thought they wouldn’t make this episode Yusa-only, but I guess I was wrong. Well, we did see some interesting things nonetheless.

The episode itself didn’t feel all that great to me, to be honest. Then again, we shouldn’t expect every single episode to be awesome.
The episode felt a bit disconnected from the previous two, and probably from the rest of the story as well. There’s a new character and that’s pretty much it.
Just like in the previous episode, they didn’t try to make a lot of drama. The probem is, though, that the material was inherently dramatic. So it felt kind of weird. But I guess there was no way around it. Dead spirit posessing body does mean that someone died.

Guessing “what’s next?” is gonna be hard this time. Now that the main cast is assembled, they could start to introduce the main plot. Or just foreshadow it while doing other stuff. Like having the characters interact, developing them and getting them attached to the viewers.

On a side note: Yuu isn’t even trying to raise Ayumi properly. He wears a mask around her as well, never calling his sister out on the weird stuff and generally never being completely honest with her (There’s gonna be trouble once she notices). He might be partly responsible for her annoying side.

Does Misa’s power have a downside though?

Does being dead count as a downside?

SHOW. DON’T TELL. You can not just tell the viewer these characters have such a relationship that goes back far and that this parting scene has weight, you must show, these guys are god damn NOTHING because you gave them absolutely no filling, with no character involved in your dramatic scene, it lacks any sort of impact.

Eh, it was the only good part of the episode imo. I didn’t like the sisters at first, but that scene won me over.
Their back story doesn’t seem that important anyway, so there’s no reason to show it. It’s just an excuse to get the sisters in with the rest of the cast.

Also, why does Misa even still have her power? Aren’t they somehow tied to the brain?

And Misa’s brain isn’t in Yusa’s head, is it?

Misa only exists as something that Yusa channels, so… yeah.

He might be partly responsible for her annoying side.

Which side of her isn’t annoying? o.o

Just like in the previous episode, they didn’t try to make a lot of drama. The probem is, though, that the material was inherently dramatic. So it felt kind of weird. But I guess there was no way around it. Dead spirit posessing body does mean that someone died.

This is kinda how I felt about that part. They needed to give Misa some sort of place to have been previously so we can move forward. I guess it’s just kind of weird because there’s zero room to really present that which just makes it weird. Like we know something happened, someone feels responsible but they reap what they sow and move on. It feels painfully cheap, but I guess we’re just supposed to accept it. This is exactly my issue with this idea of actually having the side characters present in this short timeframe because it lays the groundwork for something that could be really interesting- But we have no time for that. Fucking annoying. Geh. To the point of where it might have felt better to leave out the weak bit all together. <.<;

Can’t help but feel the pains of Maeda still having a story in there that he just can’t create- All the pieces are there but they simply couldn’t be expressed- Not that he intentionally wrote nothing there. I can feel that he did create a scenario because he’s good with his character design.

Does being dead count as a downside?

I guess but did her power change when she died then?

Do we know if she had a power before she died?

I kind of wonder if it’s what got her killed. But about having powers- I would think so, at any rate.