Which Key Visual Novels have you read? (Votes Reset)

This topic is an updated version of an older poll which ran from 2015-2018. Here is the link the older topic Poll: Which Key Visual Novels have you read? If you already posted your thoughts in the previous topic, and don’t feel like changing it, you’re welcome to copy-paste it into this topic.

No talk about any big or moderate spoilers without tags, as usual.

Although on its own Refrain would be Top 3.

Well, I have ‘read’ 8 series so far including that I still have not finished (yet). Somehow I’m still not touching Tomoyo After despite it’s already on my Steam Library.

Now I wanna see who’s gonna be the first to not tick LB! and/or planetarian 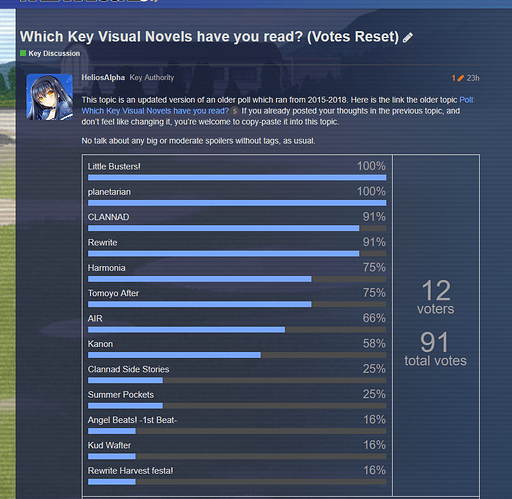 From best to worst

For the ones I actually like, here’s some thoughts:

Tomoyo After has some problems, especially with how they handled the decision tree in that game, but the structure is otherwise simple and sound. An episodic arc-based system with an overarching narrative gives us ample time to learn about the cast and to follow Tomoya’s growth in an environment that isn’t overbearingly reassuring.
Aside from Tomoyo herself the cast is very well put together (which is important considering almost all of the game revolves around making them interact) and the inclusion of some of my favorite elements from Clannad and Little Busters without the negative traits of those respective games makes Tomoyo After a shoe in for first.

Clannad ain’t my favorite by a long shot; I could do without most of the routes and god knows I never want to sit through After Story ever again, but there are some really strong elements in here. The common route is incredibly interesting to me, with a strong sense of atmosphere (helped by Tomoya’s twisted narration and the musical accompaniment) and another interesting structure. At face value it has a very simple “find the heroine and talk to her” method of progression, but the way it is handled makes it less about the heroine and more about Tomoya finding ways to escape from the rest of reality. It’s a very intimate common route for that reason, in stark contrast to the Siglus titles that have a constantly vast scope, and to Litbus which starts grand and hones down into intimacy over many hours.
Tomoya’s rapport with Sunohara is probably the only consistent dynamic in a VN to make me laugh, and the various routes such as Misae’s, Yukine’s, Sunohara’s and Koumura’s do an amazing job of honing in on a single aspect and executing it as well as they could manage. Unfortunately a lot of Clannad’s other elements feel like simply weaker versions of elements seen in some of the Tactics titles, and those to me are the most interesting aspects for Clannad to utilize. It never quite does so. The crazy Maeda mindpalace nonsense never really gets going despite constantly existing in the background, and it’s really disappointing to see how much it underwhelms.

Kanon is my favorite by a long shot, but not for a reason most people will care about. There are elements that most people can appreciate; the amazing winter atmosphere that gets the nostalgia flowing, or the trickster nature of Yuuichi, or even something as simple as the heroines having a favorite food. There are a lot of small elements to like, but really what does it for me is the additional thought put into everything. The voice acting—especially with Nayuki and Sayuri—not only explains the character’s entire story in depth from the get go, but constantly tugs away at the narrative in an attempt to distort it… And I really hate that not many people take voices into consideration beyond the very basics of who did the acting.
Then there’s the writing which, with the Afterglow motif, and the telling dialogue, and the transformation of character speech… With all those elements in mind, it’s really hard to actually fault the writing. Even in the one actual negative example I can think of right now (an event in Nayuki’s route) I can come up with multiple justifiable and entertainingly engaging explanations for why such a choice was made by the writers. Whenever I find I flaw to poke fun at (my bread and butter) another element of the narrative comes in to point out my incomplete judgement, and I realise that it’s a frankly airtight product.
And airtight is great, but ultimately the game never leaves the small scope it set initially, and the heights it strives for are relatively… boring. So even at its best, and even pushing perfection in execution, it isn’t a great enough craft to realistically match up to Clannad in my mind. It’s still my favorite, but I can’t say it’s the best.
A lot of my favouritism comes from very personal factors as well. It was, after all, the first anime I intentionally watched with the idea of “anime” in mind, and it was one of my first VNs. It basically taught me what highschool life was like before I was even old enough to experience it, and heck I’ve combed over every single sentence (in English and Japanese) so many times while working on my voice patch and other personal projects that I picked up many minute details, most of which won’t matter to anyone but me. And one day I’ll sit down and explain all those things, but that won’t be for a long time.

Summer Pockets is weird. Well, maybe it’s normal for most, but for me it is very very weird. I’m still not used to 16:9 resolutions for these kinds of stories; it’s more suited to a grand adventure like Rewrite than to an intimate romance narrative. I’m still not used to the art style; everything is so bright and clean and lacking in interesting flaws. The music… I don’t remember any of it. It was all very generic and simple and one note, the only notable ones sounded like clones of previous key songs. The vocal tracks are soooo poorly timed, it’s hilarious at times. Oh and jesus christ the routes are slow. So slooooow. Every route except for one feels like it had an additional common route thrown onto the start of it, it takes forever to get started…
But then it gets started. Shiroha comes in and makes all of that wasted common route time into something you can’t help but appreciate. Kamome strolls along with her suitcase and takes you away on an adventure, far away from any of the flaws I mentioned previously. Even the Ao route (though it never reaches its grand potential) remains notable in my mind for being a great romance story… And also the rest exists.
I suppose really Summer Pockets is an overall bad thing that gets saved by a couple good things. But eh, at least you can beeline for the good things and aren’t locked away from them by any route order requirements.

Now I wanna see who’s gonna be the first to not tick LB!

oops. Too much to read, too little time.

(Also the whole possible having to start from scratch because PC change, as detailed in a different topic)

Please don’t crucify me for putting Clannad so low! I still love it with every fiber of my being, just not as strongly as all the others. This is mostly because I didn’t feel a strong connection with most of the characters, and I was spoiled on After Story by the awful movie adaptation. I’m hoping that once I read the Clannad VN I will grow to love it much more.