Show Off Your Goods

Do they still sell Potato plushes at these kind of events? I really really want a Potato.

Potato is major character for me…

Once I get the rest of the Japanese BDs of the series, this is next on my list hehe.

I got a set of “Niitengo” trading figures recently. They are so cute. 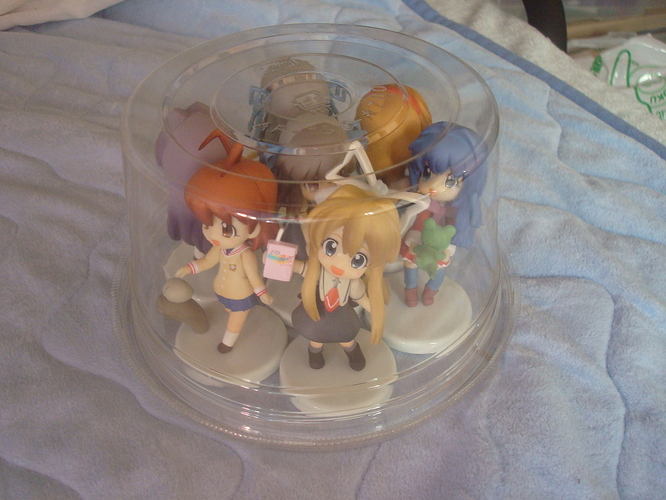 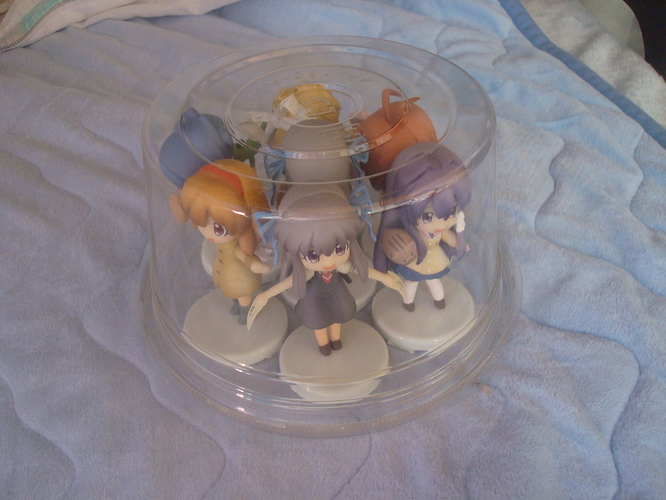 I like your collection! Especially the rewrite tapestry and memorial box. 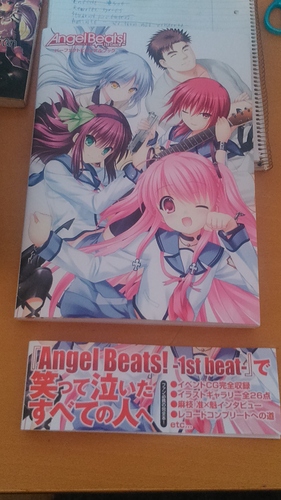 My much awaited copy of the Angel Beats! 1st beat Perfect Visual Book arrived 2 days ago, so I’m ecstatic right now. It starts by introducing all the characters and show their sprites. 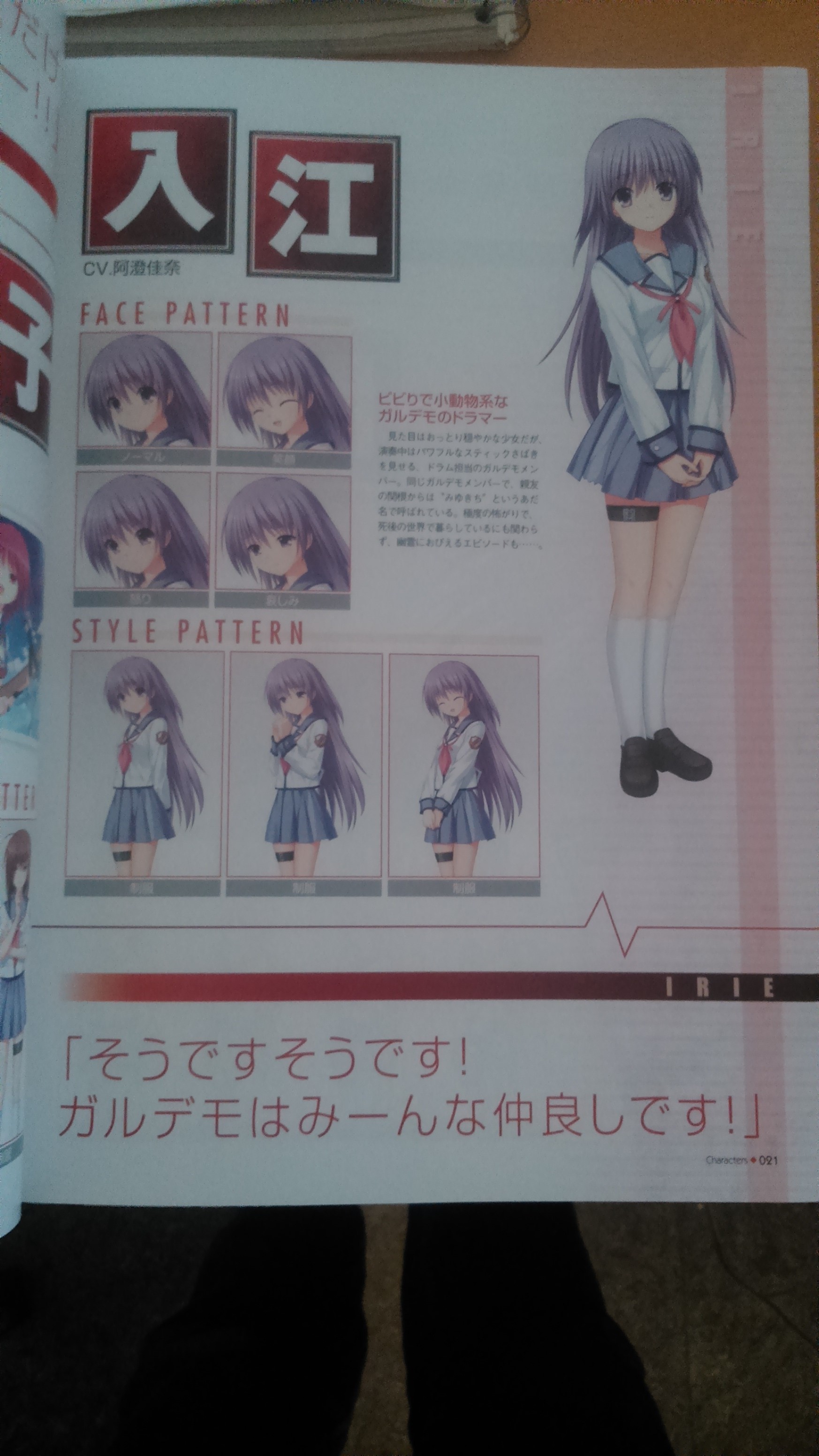 Then they go over the story quickly alongside the CGs.

We’ve got 13 pages on how to actually beat this thing 100%. There are some smaller interviews with some of the cast members. They include the actors playing Yuri, Kanade, Hinata, Matsushita, Iwasawa, Hisako, Sekine, and Irie.

After that there are some pretty pictures. 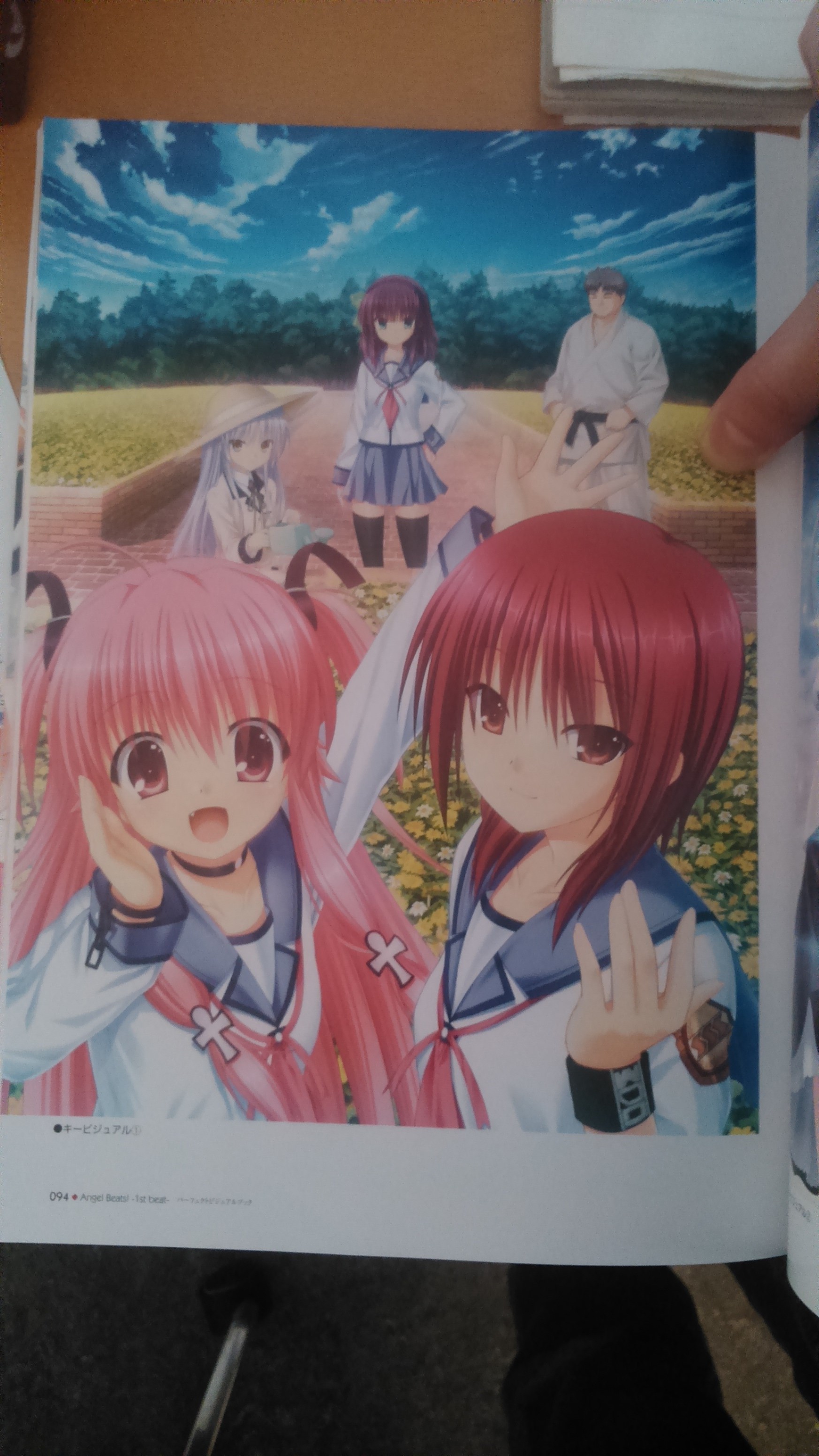 And also some pretty lewd pictures.

They also include a nifty little page of connections between the VN and Heaven’s Door.

Finally it finishes off with 3 longer interviews with Maeda and Kai, Kitamura Eri(Yui), and Lia. Then lastly there’s a gallery of background art and some early art with comments from Na-Ga.

So I’m definitely not going to be short on things to do, reading and transcribing this stuff. 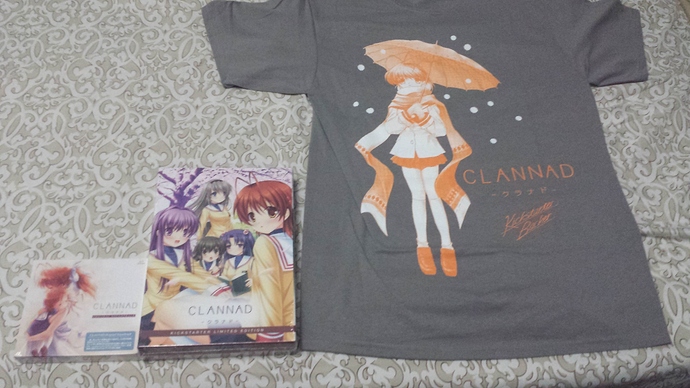 IT’S HERE!!!
@Pepe Your name is on page three of the special thanks if you went under the name pepe. 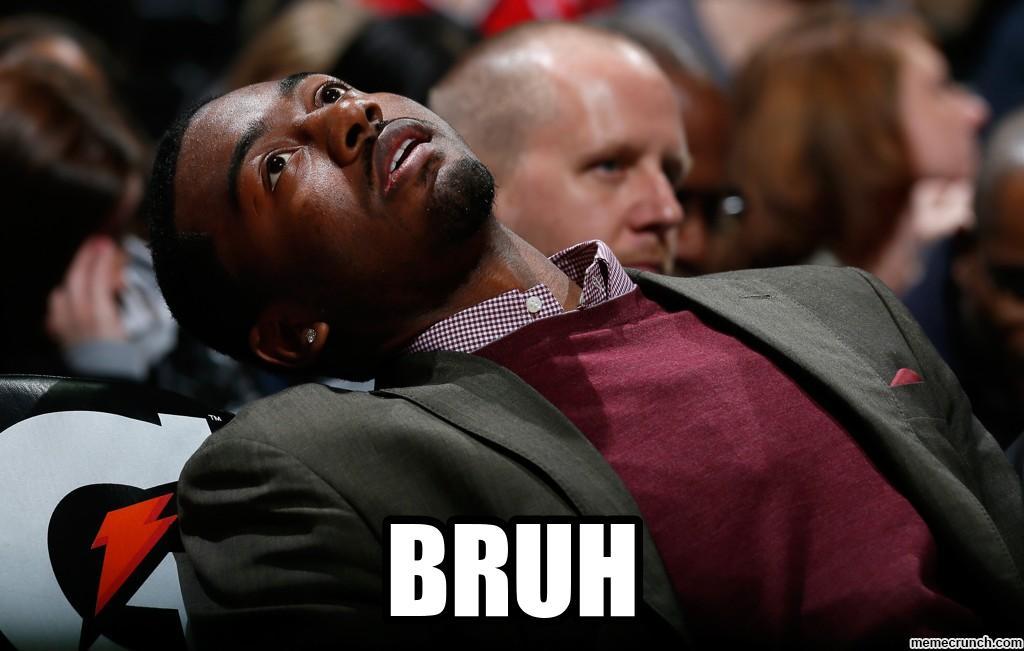 @Pepe Tell me more about this “Key Summer Sale”…

@daysofsummer I completely forgot to visit Zen’s booth at Comiket! I tried searching for “key C89” on pixiv to see if any circles were doing Key books, but I didn’t find much. Do you know any other circles that draw Key stuff? I’m thinking of going back this year.

Now for my stuff that I got while I was in Japan: 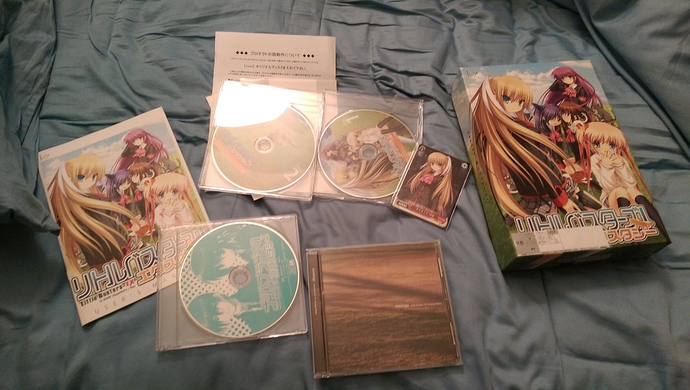 IMAG0223.jpg2150×1216 704 KB
I’m soooo glad I got this, even though LB is coming out in English. I found it in Mandarake in Akiba for like 1000 yen, so I absolutely could not pass it up. Japanese people take really good care of their used games. This one includes a drama CD and a REALLY good remix album. It’s a weird yet awesome mix of post-rock and downtempo/glitch effects. The closest thing I could compare it to is the band Lymbyc Systym. 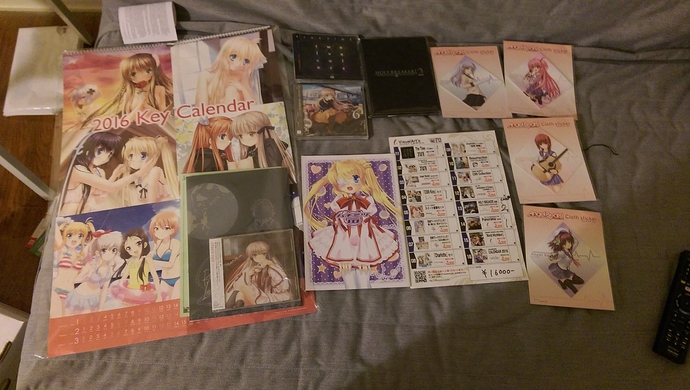 Here’s the stuff I got at Comiket. First, I got the Key special set with a big calendar. I’m not sure what to do with it though, because it’s extremely lewd and I don’t know if I’m allowed to put nails in the walls of my apartment. Second is a pair of I’ve Sound/KSL CDs and a copy of Holy Breaker 2 that I got at the Visual Art’s booth. Also included is the order sheet that I filled out and handed to the cashier to get my stuff.

Then there’s Hinoue Itaru-sensei’s doujinshi that I got at her booth. On the 3rd day I went straight to her booth as soon as the doors opened, but I was amazed that there was no line. I’m pretty sure I saw her at the booth, but I was way too nervous to talk to her, and she tweeted that she wouldn’t allow autographs because she didn’t want to hold up the line (at least I think that’s what she said, my Japanese isn’t very good). The first half of the book is drawing from Rewrite and some anime she watched recently, and the second half is a journal about her trip to AX. I could try and translate it, but it would be hard. Lastly are some fancy Angel Beats! stickers I got in Akiba.

I actually did see the Key Memorial Box at a store in Akiba and thought about buying it, but my suitcase was already almost completely full and I had no idea how to fit it in. Please nobody buy it, because I’m thinking of coming back this year

and a REALLY good remix album. It’s a weird yet awesome mix of post-rock and downtempo/glitch effects. The closest thing I could compare it to is the band Lymbyc Systym.

Ontology man! Semicrystaline and Ontology get a lot of crap from people, but they JUST DON’T GET IT! These albums are gooood.

Semicrystalline is scary. Dive (so fast) is Hella good though.

Did anyone else’s copy get damaged in shipping at all? The corner is completely torn on mine because it seems like Sekai Project didn’t use very much padding in their envelopes they used to ship the games in. Meh, oh well.

Also special thanks to Pepe for helping me acquire the C89 set!!

My copy isn’t damaged but my box is misaligned, they shipped mine in a big boxx with just a long sheet of paper covering my goods.

Mines slightly damaged in one of the corners, but it seem bad enough that it will not stand upright… well it will, but it leans way too forward and I would have it behind some figures so it make me rather nervous. If I open it a bit it helps but still is more unstable than the other games… Maybe I’ll remove some of the stuff in it to lighten it up.

Overall it is really awesome though I just need a way to display it safely. 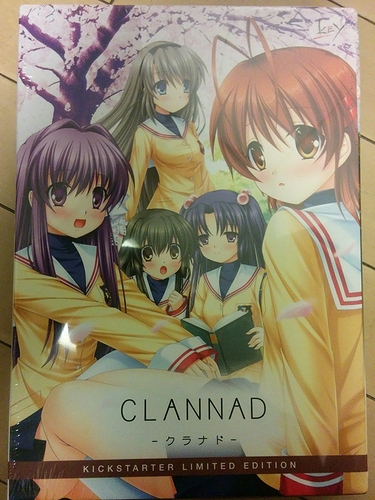 Just got my copy earlier today \o/ My copy is in pretty good shape, but I guess it got a bit squished so the top cover kind of overflows over the bottom. But all is well and the packaging is just lovely~ Totally deserving of a physical release of a Key work

I got my copy yesterday. I do like how the box is numbered; really makes it feel special. My copy is a little squished as well, though I feel like this may have more to do with the construction of the box than any overzealous postal workers. Other than that, it’s pretty much perfect. I was so close to making page 1 of the special thanks, too!

Now I just need to rearrange my games shelf so I can actually fit this massive box on there.

Uh oh, I’m half scared & hyped at same time after reading that. I don’t want to say the 3 magic words when I wake up with a serious problem my oversized care package. >.<

I had time when I ordered a PC case from interstate w/ express shipping “Fastway” & the cardboard box came home pretty beaten up. My heart almost fall out tbh. The PC case it’s self was in perfect condition although.

I think I’ve said before in this thread dunno I’m getting deja vu from reading this thread but I’ll give you a hint of starting letters of magic words. I - T - M

There’s also my Dorj plushie that I sleep with every night.

“Kawaii! I want to take him home!”

Nothing was damanged though so im sure it will be fine, as for the mis alignment its really small and is prolly just cause of how they made the box. The box just tilts alittle but thats about it, if you want I can upload a picture of the box it came in for me atleast.

No I meant the box they shipped the game in. But the corners of my game box is fine just alittle misaligned.

I just realized that when I reply, it doesn’t includes everyone in the conversation.Too much twitter I guess. Dunno how I get mix up with people although.

I’m gonna assume the three of you guys & @s0ewhat @mechgamer123,@Mow are talking about shipping box.