A theory after finishing Chihaya’s route in Rewrite

Chihaya’s route is actually Sakuya’s route. Sakuya felt like a more important character in the route and the connection between Sakuya and Kotarou seemed more sincere.

Esaka is Kyousuke’s grandpa. That’s where his sense of humor comes from.

A theory after finishing Chihaya’s route in Rewrite

That’s not really a theory; that’s more like a fact!

Esaka is Kyousuke’s grandpa. That’s where his sense of humor comes from

spoiler to Rewrite Terra And Kyousuke seems to inherit that dying scene CG too.

This one has been floating around lately

Remember when ayumi was in angel beats? 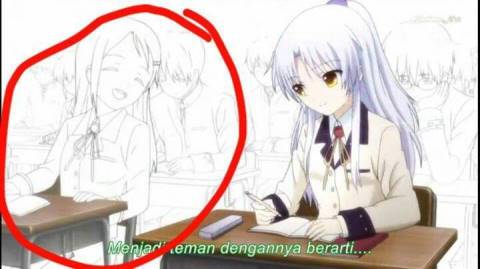 Very funny and interesting theories. Here’s a crazy one that I’ve never was able to get it out of my mind.

I’ve always felt that this white bird is some winged mother… I’m alone believing this?
I can’t stop thinking about it when it appears, specially in the extended anime OP.

Furthermore, in the Visual Novel, we’re told that she’ll always be around or something like that.
And she asked to not be buried. Maybe she just vanishes and changes, just like Yukito-san before converting in Sora. 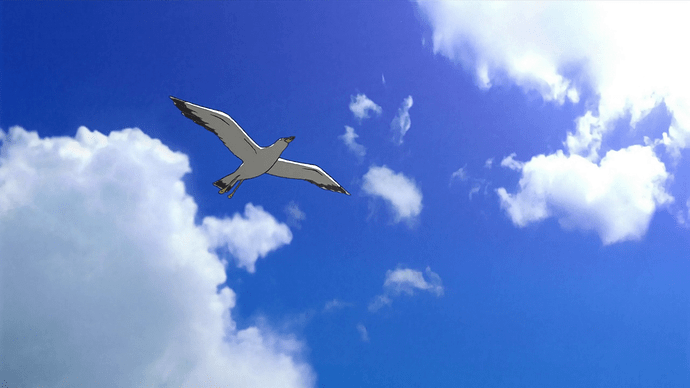 What do you think?

I’m not sure if I should put this in the “Diagnose Key Characters” topic, but I think it fits more here. Anyway, I think Komari from Little Busters! has cancer. What makes me say that? The ribbons in her hair are the same color and pattern as the ribbon for Nasopharyngeal Carcinoma (AKA: the cancer I’ve got). Granted she doesn’t show the signs I had (headaches, lack of appetite and weight loss as a result of the lack of appetite, all that good stuff), but the ribbons caught my attention.

Here’s a weird theory I thought about Clannad and this is based off the anime and there’s going to be spoilers.

What if the entirety of Clannad and Clannad After Story was told in a flashback? Because in the first 10 minutes of the anime, we see that everything is blueish colored to symbolize how Tomoya viewed the world in a very melancholic way. But as soon as he talks to Nagisa and she turns around to look at him, all of a sudden everything turns back to normal (everything is colorful). This could be seen in two ways, one being that it’s a symbolism of how Nagisa is about to bring color to Tomoya’s life and is going to make it lively for him or it could also be seen as a transition to a flashback. I’m leaning more towards the latter and to support my point, in episode 16 of After Story, after Nagisa dies we see the same scene from the beggining of the first episode at the end only this time, she walks away from Tomoya in the opposite direction and Tomoya monologues on how they should have never met. This could be interpreted as Tomoya remembering the events up to that point and then feeling guilty of what happened, hence saying how they should have never met while chronologically, they are still where they are in the first 10 minutes of the first episode.Then in the final episode (unless you count the recap episode), we the same scene again only this time Tomoya behaves as if he just woke up from a trance, calls out Nagisa’s name and then rushes to stop her from walking away from him. You could see that as a way of Tomoya completing his recollection of what happened up till the events of the other world, hence why he has a shocked face and then turns around to call out Nagisa.

What do you guys think?

I’ve actually thought about that before and I’ve come to the conclusion that (still CLANNAD anime spoilers):

The CLANNAD anime is purposefully very ambiguous concerning that entire event. It’s ambiguous about the light orbs and the illusionary world, about the scene at the end that you are referring to. And above all, it is ambiguous about the timeline. I think its very possible and very reasonable to think of most of the series as a flashback as you say, but I think it could just as easily be many other things, which include time paradoxes. So I think they kinda purposefully left it up to the viewer to decide for him/herself in the anime.

I wont speak to how the VN treats the whole thing since the bookclub will be starting so soon.

That’s something that I see working for the Anime, sure… For the VN, I have my own theories, and they’re definitely not ridiculous

But yeah, the biggest change with the anime and the VN is the fact that multiple routes exist, so it simply being a “flashback” doesn’t really work.

Why you do this to me! God now you’ve got me thinking.

It would make sense In a way and it explains why up until episode 16, all the narration Tomoya’s done was in past tense as if he’s done it all before, such as

“After a while I felt like my heart couldn’t take it anymore, I felt like I ran out of hope” episode 16 of After Story.

however when Tomoya was on the hill with Nagisa, when he’s life didn’t involve Nagisa (first episode of season 1) and when he contemplated her not being in his life (episode 16 and episode 22 of After Story) the colour of the scenes were bluish, but when Nagisa was involved, it was full of colour. So this again could have symbolised how Nagisa brought colour into his life (as you pointed out) rather than it just being a flashback.

That being said, it could very well mean the scene on the hill represented both Nagisa bringing colour into his life, and was expressed by the use of flashbacks to the events that determined where Nagisa was going to be In Tomoya’s life. So honestly I don’t know

Sorry if it’s a bit hard to follow and confusing, I haven’t watched Clannad in a while and I only watched After Story once (despite it’s reputation, I found it a bit boring and preferred the first season and the school orientated episodes of the second season, but that’s a different topic) and I’m not the best at the abstract side of English, hence why I’m just passing in English ATAR, so I might have said things that make absolutely no sense.

Rewrite is connected to every Key worlds:

Planetarian is a future world of every story. Yukito is a summoner, the miracles of Kanon are the same power as the miracles of Clannad and is the Key who materialize the happiness into miracles (the good memories).
Also: In Clannad, Nagisa got a part of the Key when she was about to die, but as the city was being developed, the power spot was getting destroyed, so she was dying. Half of Ushio’s life was the power of the Key, that’s why she was dying too, the half of the life that Tomoya gave her wasn’t enough to make her live. At the end, Ushio created a parallel world to gather enough power to rewrote the world.
And Koutarou is the descendant of Ushio, that’s why he has so much afinity with the ribbons, he has part of the Key’s power. Everything is connected!.

Kagari is the reason for all the resets in the world. Kyousuke is the creator of the artificial world. Ushio is the creator of the illusionary world. Ayu is the girl who created her own body out of a dream, into reality, the abilities of the power users in Charlotte, the world for the Afterlife. Kagari created all of that because she saw sympathy in them, knowing what good and bad memories are

Rewrite Every key game is a failed blueprint.

Rewrite Every key game is a failed blueprint.

Heck, the world we live in is a failed blueprint. RIP everybody

Wow @Aspirety…that is…the most shocking twist theory a Key fan can made, I’m in awe, imagining what would happen if that becomes canon

Guys, I know it’s tempting, but you can’t explain all key magic with Rewrite. there are quite a few things that don’t work.
Rewrite warning for everything.
Kanon Ayu’s astral projection and Makoto’s human form could be familiars, but a summoners is needed to create and power them.
Clannad Jin said that Nagisa was in a similar situation to Kotarou: being kept alive by a power spot in the town. Once again we don’t have a summoner for this. I’m not sure how to interpret Ushio creating the illusory world. If that world is similar to the gray city, It would require far beyond the life of a single human to create that. The gray city is also a physical place unlike the illusory world. If that world was another part of the garden then it wasn’t created by Ushio. Ushio would have to be of equal -if not greater- level as Kashima Sakura to transcend the garden; that seems a bit extreme.
LB! Are people implying that the dream world is a familiar? The problem I see with that is how they got enough energy for it. There’s also the fact that the dream dissolves which the gray city wouldn’t because it’s a physical item.
AB! A world where everyone revives unconditionally would break the system completely. It wouldn’t serve any purpose and use up huge amounts of energy if we assume it’s possible in the first place.If Kagari was willing to spend that energy, then there would be no reason to distinguish between children and adults. All humans are her children after all.
Charlotte I guess this could be a world where hunters are made to be more frequent, but then the comet shouldn’t have anything to do with it.
There you have a couple of blue wedges to take care of.

Yeah but there’s nothing to say that (Rewrite) familiars and summoners are a universal constant in Rewrite. The simulation play in Moon route seems to indicate that there’s all sorts of paths humanity can take. Every blueprint can have its own magic