I loved Lucia’s voice. It changed a lot during the whole route.
First it was so rude and tough, and after she started to date Kotarou it was so high pitched and sweet. I found it amazing.

Favorite Lucia line: “But if we can’t use the Chihaya beam, whatever shall we do?” and all its other variants

Lucia is a very unfortunate girl, cursed with a body that rejected and threatened all forms of life.
I think her route shows that different people have very different priorities. We’ve seen how mad scientists valued their research more than human lives. Guardian prioritizing the lives of the many over the lives of the few and the planet itself. Kotarou, Shizuru and Chihaya valued love and friendship most. But for Lucia, it was a purpose in life.
Being a walking bioweapon, Lucia had to distance herself from everyone. She couldn’t even directly touch most life forms without killing them, as she’s experienced many times over. Her agony and self-loathing must have been far beyond what an average high school girl would be able to bear.
Therefore, she needed a purpose. A duty. Something that would justify her very existence. So when her poison became too much even for the only people who could always be with her, she desperately needed a purpose. Even if it’s offered to her by the devil himself. Even if it’s given her by the people who made her this miserable in the first place. Even if it means killing all her friends and her lover.

Some people call her selfish for what she has done. But I think that’s a far too hasty judgement. Lucia has suffered so much in her life. She couldn’t be friends with anyone until she met Shizuru. She used to be alone and now that she’d found friendship and love, it has brutally been taken away from her and it was all kind of her own fault (not really, but that’s how she must’ve felt). It’s not about putting your needs about those of others. It’s not even about life and death. If Lucia finds no purpose, then not only her life, but even her very existence and the deaths of those killed by her poison would have been meaningless.

Kotarou was able to save Lucia by doing two things. The first one is rewriting himself so that he could always stay by her side. And the second one was to give her a purpose: To be his reason to live on. For he wouldn’t be able to live anymore if he lost her.

So when her poison became too much even for the only people who could always be with her, she desperately needed a purpose. Even if it’s offered to her by the devil himself.

This is why that final hour-or-so (on auto) was so infuriating. Clearly this is the problem Lucia is facing, and Kotarou changed all that via Rewriting himself, but he never told her. When Lucia gave up and began to accept anything as her purpose, Kotarou could have closed it out there just by talking about how he changed himself so that Lucia’s poison doesn’t affect him negatively, and actually is a necessity for him to live. That he actually needs her to keep living. (With some kind hearted words shoved in-between.)

Some people call her selfish for what she has done. But I think that’s a far too hasty judgement. Lucia has suffered so much in her life.

Selfishness is selfishness no matter what excuse you put behind it.

Selfishness is selfishness no matter what excuse you put behind it.

Selfishness is a simplistic term that can’t hope to fully describe or explain Lucia’s actions.

No single word can fully describe a person’s actions. She was still selfish though.

But so is every other human in existence with the “right” mindset.

Of course~ There’s nothing bad about selfishness IMO.

As I said above, one of my only two real problems with the route is Kotarou’s stupidity at the end, which is actually caused by a lack of selfishness.

First things first. Happy Birthday to her. I was waiting on posting here for this day.

I really enjoyed her route with all the twists it had, like that Haruka thing, the gloves and the thing with eating the hot meals. She brought lots of fun into the common route and lots of feels in her own route.

Love: oh god that scene with the skyline, my favorite CG in all of Rewrite
Hate: for those persons, that played with her and made her body like that
Confusion: about that whole mystery around Haruka, I really loved this part

Overall one of my favorite routes storywise and it would probably be one of the first routes I go for when rereading Rewrite.

Boy you must hate Kotarou a lot if that’s how you react to it :v

Actually, no. I self-inserted myself in him. But I like him, really. Kotarou = good guy

But he makes so much lewdcia jokes… That isn’t very respectful :< HE IS ENEMY OF WOMEN TENNOUJI KOTAROOOOOOOOOO

But if he didn’t make these jokes, perhaps she would never fall for him. She’s a tsundere, so she likes the jokes on the inside.

Nope. @Kanon-senpai treated Lucia’s problems as something silly, when actually it’s much more serious. This problem ruined Lucia’s entire life. Kotarou has never joked about that.

What about that whole thing about him having to be thankful to Brenda for possibly being the cause of Lucia’s boobs becoming as big as they are now? That felt pretty disrespectful, especially considering how Brenda literally ruined Lucia’s life

Seriously though, when I heard him say that, my only reaction was “No Kotarou, no!”

Can’t fault you for not remembering though. I have even worse memory x.x

I appreciate the attempt, but…Ryukishi07 was better at writing horror.

Lucia is a hardcore tsundere, since she gets angry at and beats up Koutarou at the slightest offense. Her rigidness, strictness and physical strength are perfect for her character. Unfortunately, her route does very little at making her respectable beyond turning her into the lowest common denominator.

She struggles a lot with her power during the route, but her stubbornness keeps her (and the plot) from reaching any satisfactory conclusion, and seems to make the story drag out. This actually makes her a worse character than Chihaya (while her personality didn’t change much, at least she was assertive and tried to help the plot move forward in some respect). Lucia seems to want to fight against plot progression, and it really hampers the route.

Another problem with this route is the multiple perspectives. It’s still clear that Koutarou is the main character of this story, but there’s way too many focal characters. This not only destroys the focus of the story, but when the story is supposed to be told in a first-person perspective, it tends to be both confusing and pointless when we’re learning about conflicts that do not apply to the main character. It works better in movies, but it never works in literature. It probably would have worked better if it were told in third-person omniscient, but Ryukishi obviously had no choice.

My last criticism lies in Ryukishi’s attempt to replicate the nakige structure. Now, he’s written Higurashi already, so it shouldn’t be that hard to replace horror with sorrow, right? Well, Ryukishi felt it should be exactly like Higurashi, and threw in horror elements that felt out-of-place and, in the end, unnecessary. He’s not bad at the emotional parts, but obviously Tanaka and Tonokawa are much better at writing this sort of story. One thing I can give him credit for, however, is how he managed to make going out with a hardcore tsundere like Lucia enjoyable. That scene was perfect, and if the rest of the route was of that quality, it would have fared much better overall.

As for what I like about this route, there were a few background tracks that were well-placed and beautiful to listen to. The CGs and fight scenes were also quite impressive, and this route pretty much cemented the awesomeness that is Shizuru. Sasuga Shizuru~ <3

There are a few more things I could say, but they’re more nitpicks than anything. Honestly, this route feels like Ryukishi tried to write something he wasn’t comfortable with. With a bit more practice, he might actually write a good nakige someday. 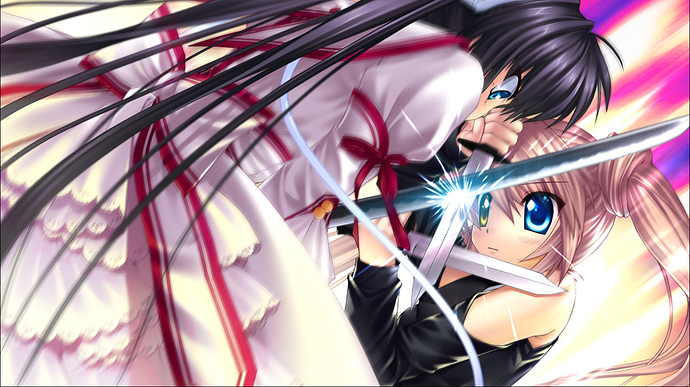 this route feels like Ryukishi tried to write something he wasn’t comfortable with.

I really don’t think that’s it. Ryukishi can definitely write emotional stories; Umineko is more emotions than anything else. I think he just wasn’t able to work within the allowed time-frame. It’s mentioned a lot in this thread how the unreliable narrator falls flat because he never took time to explain it and you’re just supposed to know about that crap. There is like 2-3 times the route shifts massively on a dime and it basically feel like hours of material was cut. Looking at the results Lucia’s route seems to have had production issues, I think Lucia was created later than the rest, but surprisingly Ryukishi describes it as a very enjoyable experience.