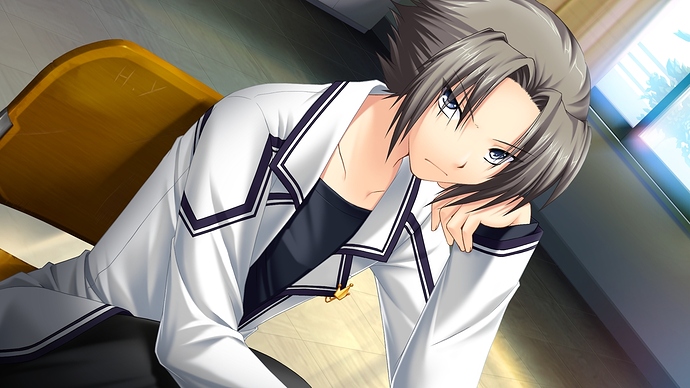 Branching off from the general Key Boys thread, I wanna get discussion going for specific male characters. Yoshino was one brought up, so I’ll be moving a couple of posts here to stimulate discussion. This thread won’t have any spoiler restrictions for Rewrite, so please feel free to discuss without limiting yourself to the early game.

What do you think of Yoshino? Was he a good supporting character or not?

I kind of really dislike Yoshino, the Rewrite one.
He’s kind of an asshole, he never really redeems himself of that in my eyes. I’d elaborate further but until I learn how spoiler tags work here I’ll refrain.

I’m interested in why you think that o.o Yoshino really won me over at the end. I wasn’t sure if I’d like him during Kotori’s route, but I guess he was just meaner in that one~

Man I really should have actually tried that, ta~
Ok lets see, well, as I said, he’s just a total dickbag for no real reason, I expected him to mellow out and soften up at some point, but he just continued to get on my nerves the entire time, I didn’t like him.

I might have had a stronger argument back when I first read it, but all I remember I just found myself groaning when his scenes came up and that’s stuck with me, I didn’t find him funny at all. I think it’s that his point was comic relief at best, but to someone who didn’t think he was funny, all I saw was a douche acting douchey, so he never did it for me.
By the time he showed up in Moon, I was already sick of him, so he had no chance of winning me over then. I was actually kind of annoyed that apparantly him and his nameless goons were closer to Kotarou than Sakuya, as a Chihaya route fan that rubbed me the wrong way too.

I believe in Akane the timeskip and events caused him to mellow out and mature a bit, I was alright with that Yoshino, but the rest of him was just bleh.

The Yoshino of the Akane route was the one I liked best. He let Kotarou get on with everything, and didn’t even ask questions. He was just like “I know you’re doing the right thing.” Then near the end he was trying to be as helpful as he could be. Telling everyone that Kotarou was an unspoken hero, and just giving him support while they worked on the fields… Kotarou and Yoshino stopped being immature at that point.

I also thought Yoshino was pretty great in Chihaya’s route. He wasn’t a prevalent character, but his arrogant mask disappeared during the incident with Midou and Fuego.

After these, I started to be a bit more positive about his other actions in the common route and the moon route.

Man Kanon, I can’t disagree with you more. I don’t get how you can call Yoshino an asshole, when of the two Kotarou is definitely the bully.

Yoshino’s two characteristic traits are his chuunibyo-like identifcation as a lone wolf/thug figure, and his honesty. Unlike Kotarou, Yoshino never holds anything back. He wears his heart on his sleeve, you could say. In the common route most of the exchanges between him and Kotarou were all just comedic jabbing (almost always at Yoshino’s expense), but it wasn’t into Kotori’s route where we started seeing his true colours. Ultimately, Yoshino saw some kind of kinship in Kotarou, and liked him. In Kotori’s route we see how Kotarou had regressed after Kotori disappeared, and we saw Yoshino get genuinely angry and disappointed with Kotarou’s behaviour, saying how he thought he was better than that. And once Kotarou finally does find Kotori and he meets Yoshino again, Yoshino sees him off wishing him well and entrusting the person he loved, Kotori, in his care. That says a lot.

There’s many instances throughout the routes where Yoshino’s true bro level can be seen. Like in Akane’s route when salvation starts, and Kotarou saves Yoshino. Yoshino gushes a bit over his superpower, but what’s more important is how much respect he displays for Kotarou. He talks about how he’s changed, how he has a purpose and is being true to himself. Yoshino must spend a lot of time worrying about Kotarou in his own way, to be able to notice something like that straight away. And despite how Kotarou always gave him crap for how naive and cheesy Yoshino is, he was always honest, and told it like it was. I respect him a lot, and can even identify with him on a personal level. I’m often the victim of my friend’s jokes myself, for being so helplessly transparent with my feelings.

And of course, there’s the scenes in the field where we finally see some development of their relationship as comrades who’ve learned to be honest and accepting of others in the new world. It was really refreshing, and cemented Yoshino as one of my favourite characters. In the end, it was Kotarou and everyone else who had to catch up to Yoshino.

I agree with @Aspirety, I think Yoshino is one of the best characters in Rewrite. Also, just want to toss this out there, if you can beat the secret final boss in Rewrite Quest (on Harvest Festa) using only Yoshino, you get a special ending… I haven’t actually done it yet though, since he’s nigh impossible to use, but I can confirm that it exists.

Gotta go with @Aspirety also. I actually was finding myself a bit annoyed with Kotarou and feeling bad for Yoshino in a lot of situations because you can tell he’s a caring dude. I think I need to reread Rewrite at least one good time though to partake in more discussions. ^^;

It’s because Yoshino always tells him to piss off when he tries to make normal conversation that Kotarou has to resort to piss taking. I don’t feel any sense of broness between them at all, unlike say Tomoya/Sunohara who have the relationship you’re telling me Kotarou/Yoshino have, he’s abrasive and just thoroughly unpleasant to talk too, I just don’t like him, and there is a ton of him in common, oversaturation is a bad thing even to thinks one DOES like, it’s no wonder I got sick of him enough that I wouldn’t even care what he was saying in routes most of the time.
I said I’m cool with Akane!Yoshino, he matured, that’s neat, but we get the pissy younger one for the rest of the game.

Yoshino is a great character.

I was always looking forward to see the next Yoshino scene. They were just so damn funny! Whenever his sprite appeared in the game, I had a grin plastered on my face. Yoshino’s comedy routine was definitely among the things that made the common route really enjoyable.

The interesting part about Yoshino is that he was a character who could act the ‘funny man’ part during a comedy scene, yet would always be taken seriously and could be depended on during a serious scene without changing his modus operandi.
I personally think that this is due to him being in constant ‘serious mode’. When you’re living your light-hearted, fun days during the springtime of youth (mostly at school), being light-hearted and joking around is the normal thing to do. Thus, the always serious Yoshino would stand out as a ridiculously out-of-place object. You could say that Kotarou’s teasing might also have been an attempt to pull Yoshino into the merry school life. Surely, they could have grown closer if Kotarou would manage to let Yoshino in on the fun.

But neither Yoshino nor Kotarou had the same light-hearted nature as their peers. While Kotarou put on an act in order to enjoy a normal life, Yoshino refused to do so no matter the consequences and decided to always be true to himself.
Such was the core of the conflict between Yoshino and Kotarou.
While Yoshino despised Kotarou’s facade and lies, to Kotaro, they were part of his survival strategy.
What mattered to Yoshino is always being true to himself and if he felt something was wrong, he’d go fix it.
Kotarou, on the other side, didn’t want to be ostracized, even if he had to become a different person.

However, if bad stuff happened, Yoshino was extremely dependable. If you needed help, he’d help you no matter the danger (Lucia route, Moon). If you didn’t, he’d just stay out of it and not be a bother (Shizuru route). If Kotarou gets lost on his way, Yoshino would beat some sense into him (Kotori route).
A true bro. I guess we should stick with ‘Yoshibro’ ^^

I feel like a lot of people turned away from Yoshino because he was so strict with himself. Especially in the Common route, he really contradicts the rest of the characters, who are mostly just playing around and having fun.

You talked about the relationship between Yoshino and Kotarou, but I saw it more as a triangle between Yoshino, Kotarou, and Sakuya. Though I unfortunately have not gone back and actually extracted some evidence for this theory; it kind of creates a heiarchy, with Sakuya at the top teasing Kotarou, who teases Yoshino. At the same time, Sakuya also has a deep respect for Yoshino, so it makes somewhat of a circle between them.

If you needed help, he’d help you no matter the danger (Lucia route, Moon).

Yoshino acted quicker than anyone else.

I really liked Yoshino, as a character. A lot more than Kotarou, I have to say.
I think he matured the most, comparing him to when he was a child. Sure, he is a loner in school, but what he does outside that is really admirable

Wait why the hell is there a Yoshino thread without anybody posting this: https://www.youtube.com/watch?v=P-54Optw9DM

I’m surprised that you were the first, and on post 14 never-the-less. Guess it’s just slipping people’s minds.

Tch. What a shame. That’s his best part!

To be blunt, while I did like Yoshino’s character, I felt disappointed he was not really needed to the plot at all. Aside from very brief kinda-notable actions in Chihaya’s and Akane’s routes (he did have a tiny bit more time in Lucia’s route though), he’s pretty much useless. Literally just a comic relief character. I kept waiting for a revelation where he would be directly involved with SOMETHING going on, but he was always just goofing off or appearing here and there to taunt Kotarou or acknowledge his growth or whatever.
I mean, the spriteless secondary characters like Inoue and Suzaki have a much more proactive role than him.

Plot, no, he was not needed significantly. Rather, he was a good counterpart to Kotarou’s personality.

Honestly, I don’t think Rewrite would have been the same without him

If Yoshino were to get involved into the supernatural part as well, we’d have exactly zero ‘normal’ characters with sprites. Kotarou’s wish for a normal life is still an essential part of him. If we carry all noteworthy characters over into the supernatural realm, then the ‘normal life’ aspect would be absolutely empty and it wouldn’t matter if there are people who don’t even know about Gaia and Guardian. It would be like, even if he succeeded in preventing whatever crisis he’s currently facing, Kotarou would have no normal life to return to.