Rewrite Anime - Episode 20 "Moving On From a Standstill" 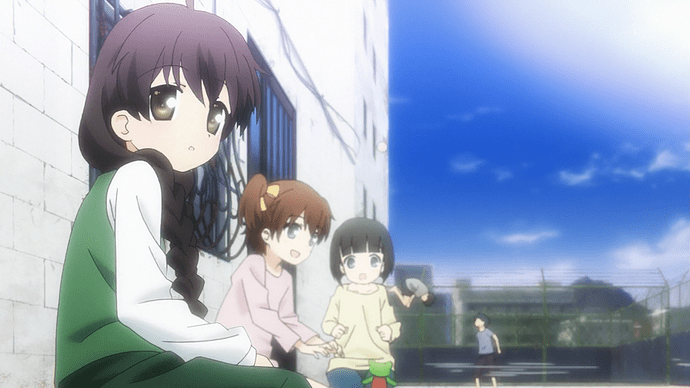 Discussion topic for the 20th episode of the Rewrite anime which premiered on the 25th of February, 2017. All references to outside works and to future episodes must be tagged with a [spoiler] tag.

I have complicated feelings about this episode.
It was paced pretty nicely, the story was moving on…
But scenes with armed guerillas shooting their AKs over their heads was so ridiculous, that I’ve laughed. Though I am not a specialist on fighting with terrorists, but I kinda doubt you can use AK that way and keep bones in your hands unbroken. Well, whatever.
Not sure if a spoiler in this case, but a bow to R+ Terra: Midou in R+ (IIRC) was not together with Jasmine on that night. I may be wrong about this, but Jasmine specifically reported to Kotarou much later that they took in a few more children, among whom Midou was… and, actually, it was Jasmine and only 2 other kids (probably Tenjin & Tenma) who were saved by Louis and Kotarou.
Going back to the episode… I don’t remember a suicide attempt by Kotarou in Terra-arc in the VN and I didn’t really like it. Though I can understand why they’ve included that in the story.

Well, so far 2nd season is much better than the 1st one was.

Everything was good…except that horrible art. (faceless soldiers …I lol’ed, even CGI-Djinn was better)

This episode is okay. It felt rather awkward, but I guess it was the conversations that feel broken, like they’re trying to speak English even though it’s not their first language. Which makes a lot of sense, considering the setting. XD

It felt awkwardly paced for some reason, but I can understand why, considering they have only four episodes left to cover what is left of Terra. (This episode covered more material than I expected though. I wished Luis’ death was a bit more striking than this, but there’s only so much feels you can get from a character who has such a brief appearance, so yeah.)

I like how they were able to create some fairly nice introduction scenes based on what is practically mere exposition in the VN. I also like the last scene with Kotarou and Jasmine, and the scene where Kotarou realized the nature of his power.

Meanwhile, the visuals are starting to get derpy now lol.

Well paced so far and progressing nicely, but the problem is that most of the cinematography for key flashpoints and choices for aesthetic presentation is incredibly poor. Parts that should hit hard feel like a wet noodle… again.

Bizarre CG explosions, faceless soldiers,some awkward dialogue and jumpy scene transitions is taking me out of this so much.

The narrative carries Terra pretty hard, and has always been what drew me into the scenario. Its just a shame this anime has to look and sound so ugly.

Not sure if a spoiler in this case, but a bow to R+ Terra:

It is true but in my opinion their change is understandable. They somehow focused on Midou in the first season, and they need to clarify the relationship between Midou and other guys and Jasumin.

Going back to the episode… I don’t remember a suicide attempt by Kotarou in Terra-arc in the VN and I didn’t really like it. Though I can understand why they’ve included that in the story.

I also feel it strange that Kotarou tried suicide, I felt in VN he was more impassive after his first experience in killing people, and this is why the battlefield are terrible and afterwards leads to his tremendous regret on killing children, but the interpretation of the anime also makes sense.
Generally, I like the episode.I like the addition of episode about Jasumin. Although she in VN has important role, she is not so focused. The death of Lewis and his farewell scene was well expressed.
However, I felt this episode a bit rushed. I want them to take more time on how Kotarou felt after his first rewrite as a guardian. For the rush, this might be because the script was written by Takashi Aoshima. HIs lines tend to be redundant and sometimes abrupt. Moreover, Jasumin looks too young to raise other children though it is the problem of character design. To sum up, the points to complain about were same as other episodes. They seems to make effort on understandability for the audience who didn’t read the novel and it is right way to make anime, but I always feel some dissapointment on their tendency to oversimplify the characters.

This was a good episode to say the least. I can see why some parts might have been different with some of the posts I read earlier. I do agree that there was a lot of material that was covered which was nice but it did feel that some things were rushed. I was kind of questioning the same thing when it came about when Kotarou was trying to commit suicide which to me didn’t feel right. When I look at how Kotarou was trying so hard to keep his sanity during the battlefield, anyone would respond in horror as to how war can change a person in so many ways that you could possibly imagine. 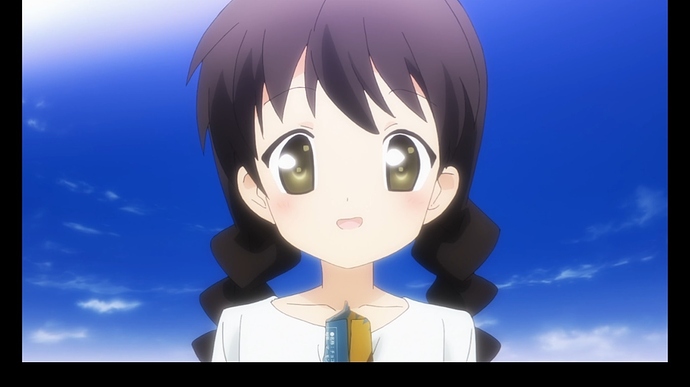 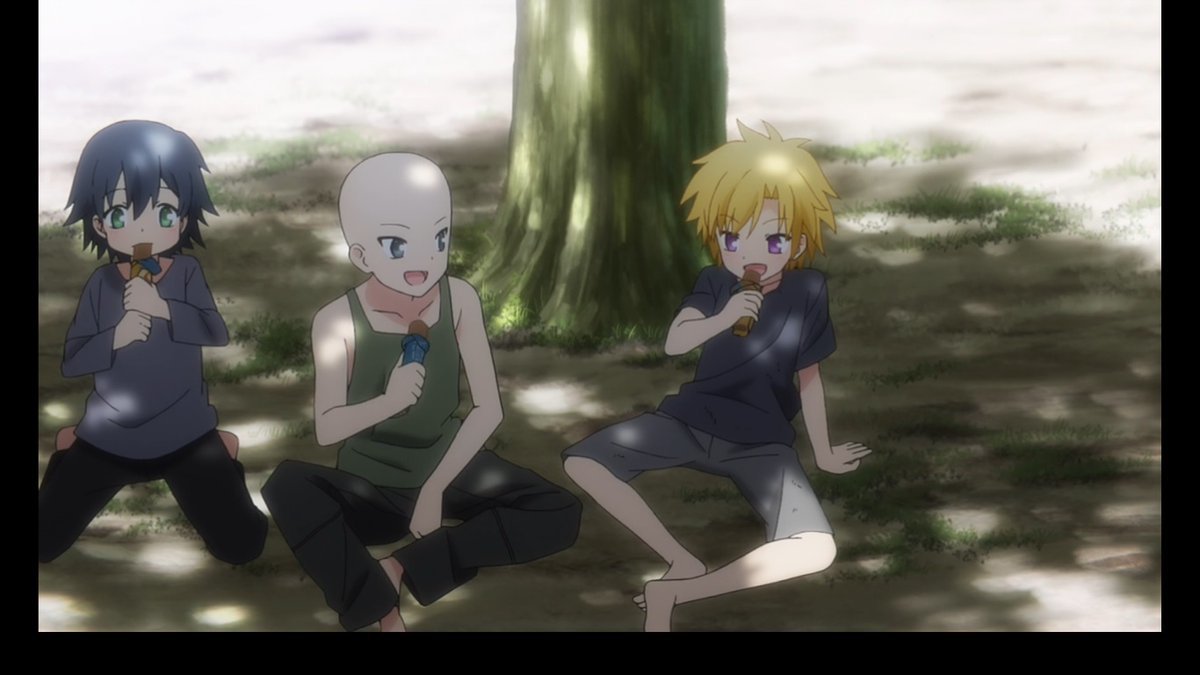 C5iCtqlWcAEaqRx.jpg1200×675 80.5 KB
Also, seeing a young Midou, Tenma, and Tenjin was really something else. They looked like they had so much fun playing together seeing they’re so happy. ^-^ 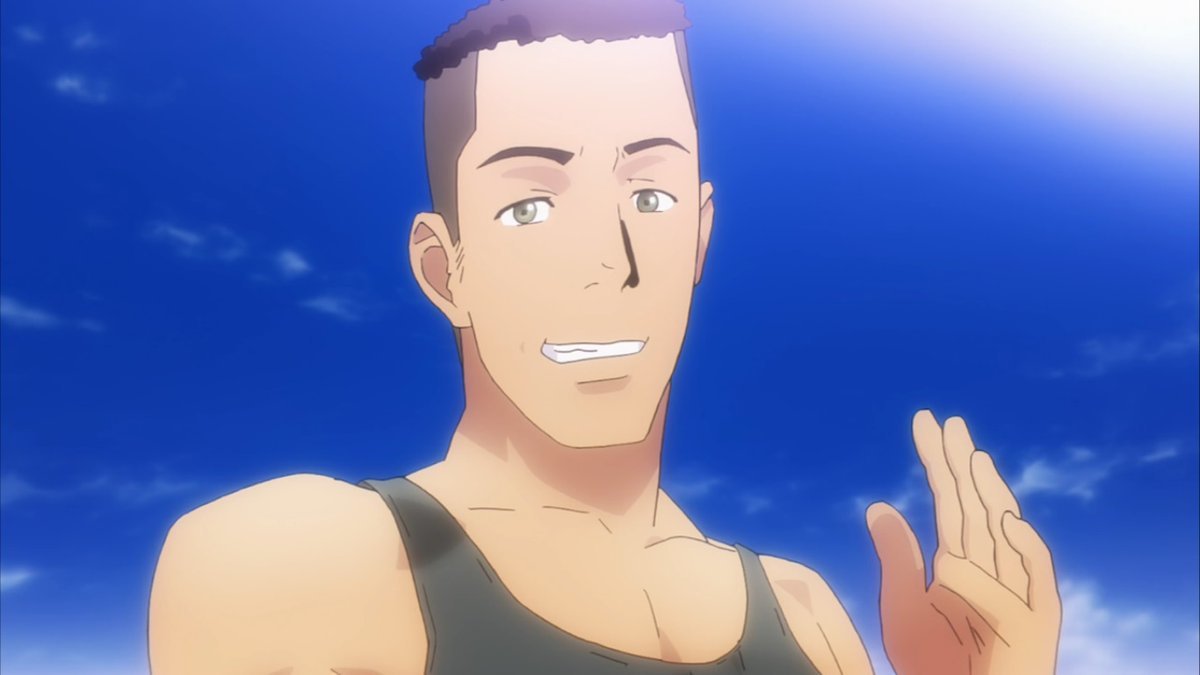 C5iENOmWUAATXjJ.jpg1200×675 52.8 KB
Luis is so cool looking that I would consider him a friend that you could trust who would always have your back.

Overall, it was all right but as always it’s still better than 1st season. Let’s just see how the rest goes from here.

I think the idea in the VN was that Jasmine and the others were meant to die that day, but Kotarou’s intervention prevented that. With that in mind it makes less sense that Midou and Tenmin survived in Kotarou’s past life. Buuut, from a storytelling perspective it works well if Midou was there with Jasmin, just as long as we assume they would’ve somehow escaped with their lives even if Kotarou never came to the country. I can get behind that change.

I don’t have a lot to say other than damn, they did this episode justice. 4 more left, still plenty of time to cover everything.

I’ve noticed that while he does the storyboard for the OP/ED animation that he works on, this is his first time to storyboard an entire episode. I’m not exactly big on his storyboarding merely on the transitions/editing parts, as sometimes there’s a sense of disjoint between cuts.

However, there’s a lot of attention put to body language, which totally matches the kind of animator Ebata is. It came out notably well during the infiltration scene. Faceless soldiers aside (though it only happens in wide shots, which is normal), it showed a lot of movements, and there seems to have some hand signals that I’m unsure of what it meant. The animation in that part is detailed, too. It’s no flashy sakuga, but the detail is definitely there. And unlike Arslan Senki, the soldiers are actually not CGI lol.

It also came out in little moments. The attempted suicide scene covered a lot of movements; Kotarou is just pulling out his pistol but both of his arms and even his upper torso is moving. When Yasmin was talking about being a programmer, her hand gesture even emulated keyboard typing. There’s also the kids and Luis trolling Kotarou around by pushing him lol. There was even a superhuman-children-playing-soccer-in-the-background cut that probably had better action that almost everything else that this series has.

After all these, I may actually be just overthinking this body language thingy, but one thing I’m sure of is that there’s a lot of intentionally ugly facial expression in this episode (and dang if this episode wasn’t visually expressive in this respect): 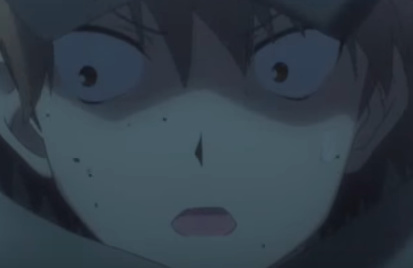 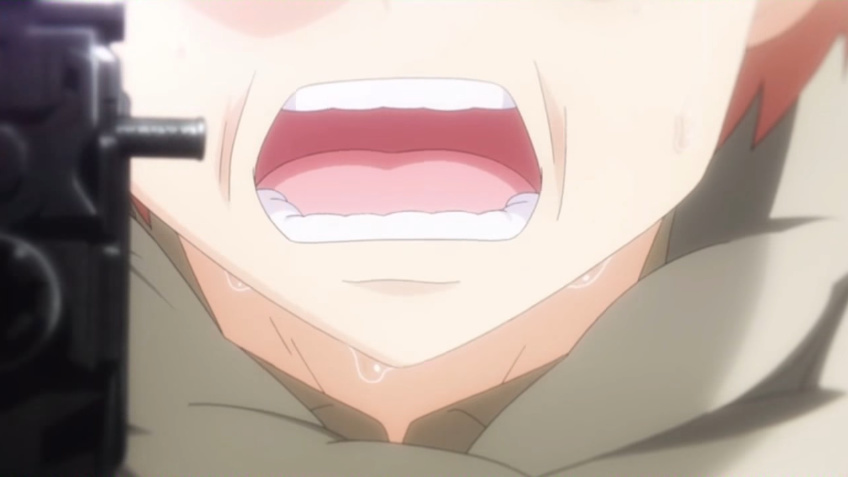 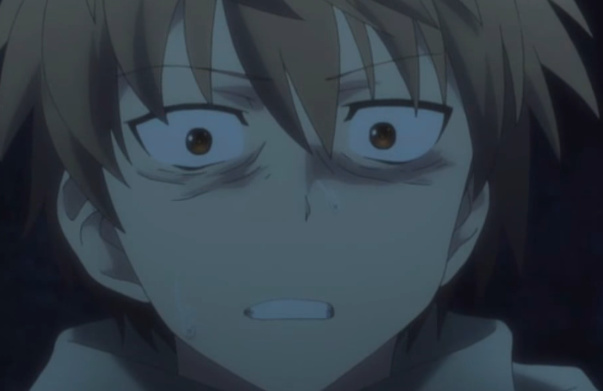 RIP the soldiers and guerilla…

besides from that this episode give me much feels

I’m not exactly big on his storyboarding merely on the transitions/editing parts, as sometimes there’s a sense of disjoint between cuts.

But the editing in this anime has always been basic as fuck. I talked about that a lot in the first couple of episodes until I simply got bored because there was never anything interesting to highlight.

Good episode, but… I kinda wish they could add more depth to Louis’ character. Not even mentioned that he was from Brazil and their first awkward communication.

When Luis stopped Kotarou from rewriting himself was also too vague. Like, how did Luis able to determine what Kotarou was about to do? There could have been a visual effect for this

First thoughts after watching the episode:
“Where is the Jasmine character discussion post, I want to see more pics”

What a powerful episode! Not only because, well, Terra is pretty powerful in itself, but the direction given through the episode was superb. It’s those little things that make the episode all the more engaging. The broken japanese (which shows that, regardless of what language they were actually communicating in, their fluency wasn’t all that great), the flashbacks to kotarou’s first kill, and the overall ambiance set by the episode.

But yeah, the episode succeeded in showing extremely well Kotarou’s own growth and what exactly pushed him to starting into motion the rest of what happens in Terra. I daresay the anime showed it better than the VN, but I’ll have to re-read the VN before I give my thoughts about that

I think the idea in the VN was that Jasmine and the others were meant to die that day, but Kotarou’s intervention prevented that. With that in mind it makes less sense that Midou and Tenmin survived in Kotarou’s past life. Buuut, from a storytelling perspective it works well if Midou was there with Jasmin, just as long as we assume they would’ve somehow escaped with their lives even if Kotarou never came to the country. I can get behind that change.

Either that or the fact that Kotarou was there on that night was what actually endangered their lives. Perhaps, if he wasn’t there, the entire mission would have failed, and Midou and co would have gotten a nice comfy spot in Gaia that would have allowed them to travel to “other countries” for “special missions”

Yo nobody’s commented on that they squeezed in the kinda Air reference: 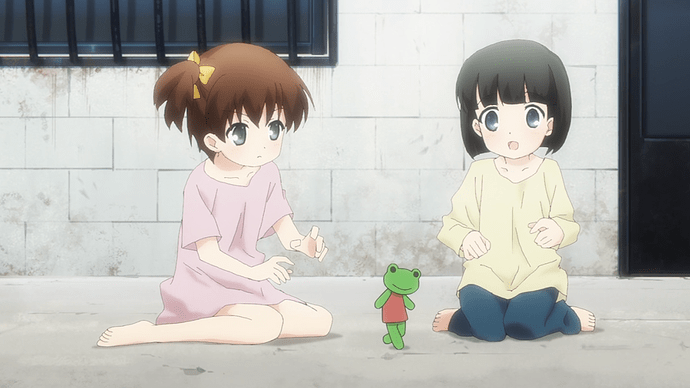 Because the same reference was made in the VN.

Not at that exact point though, right?

No, it’s in Akane’s route, but it’s the same thing with them moving a frog doll.