Due to the recent(ish) news of Maeda Jun’s mahjong twitter I decided to make a mahjong topic in case people were interested and wanted to play. This is also for people who watched Saki and were all like “wtf is going on but this yuri ship is too good so I’ll keep watching.” While I am not entirely familiar with the Japanese variant, I will explain that because there is no good way to play my normal Hong Kong style mahjong online. So for now we will start off with the basics.

What is mahjong?
Contrary to popular belief, mahjong is not a !@#$ing solo tile matching game with tiles organized in stupid shapes. Throw that !@#$ out of the window now. I have no idea where the hell that comes from but its bs. Mahjong is traditionally a 4-play Chinese game that uses tiles and 3 dice. And chips or whatever for counting score. The game goes in a counter-clockwise direction, with players drawing from the wall and then discarding. The Japanese variant uses only 2 dice and sticks and stuff to count score and adds a bunch of stuff that you don’t really need to worry about. The object of the game is… well originally I explained this all myself but then I found things that explained Japanese mahjong way better than I ever could. So here.

Go get better explanations cuz I’m not good at Japanese mahjong
arcturus.su/~alvin/mj/sywtpmj-1.4.doc
It’s a downloadable doc that you have to copy and paste into your browser thing. Teaches everything except bits of scoring I don’t even know. You probably don’t need any more than this anyways.

tenhou english documentation
It has English translations for a bunch of stuff on tenhou so you can use it to learn the UI on tenhou. Also has links to the first doc and other resources as well. 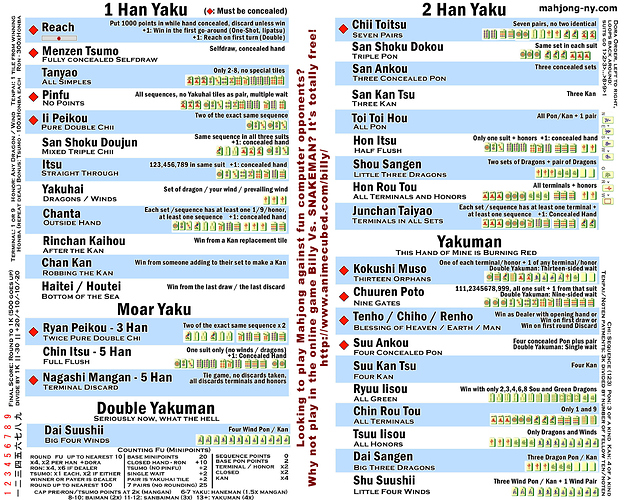 If you are interested feel free to just comment or pm me. I can make a lobby or something if at least 3 other people want to play.
After you have read these resources you should be ready to play on Tenhou! yay!

I know how to play 4 player Mahjong and have been interested in finding players to play with me.
However, I didn’t know of a place to play it before now, Thank you!.

Everyone here plays Mahjong except for me. I do play the kid version that has the same mechanics as playing the bridge card game.

I’m used to the European EMA Riichi rules, so even though they’re mostly identical sometimes something happens in tenhou that just leaves me confused (“Huh, why couldn’t I call that there?”, or such). Love the game, though, especially live. Haven’t had a chance to try out my new set yet. 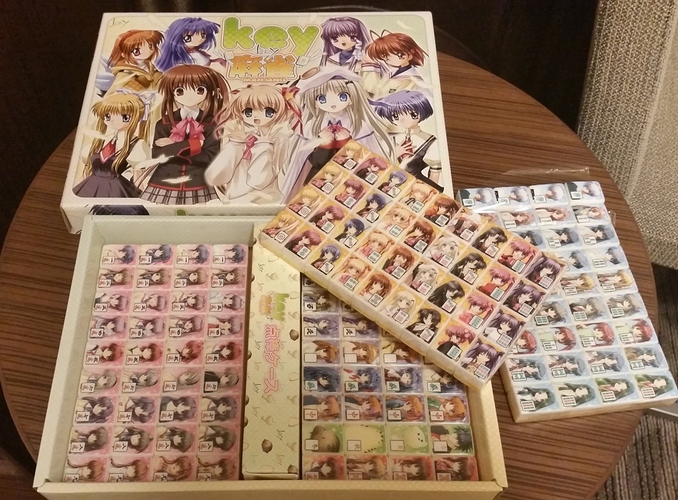 I really really want one of those ><

That set does look nice, but kinda hard to play with… I mean, you have to discard tiles… and how can you discard such cuties, huh? orz
On the topic of mahjong. I’m used to Japanese league riichi-rules and familiar with EMA. Prefer to play irl, but enjoy to play on the as well.
Would be nice to play together one day… on Tenhou or somewhere. Though, my account is probably dead there xD

Yeah I’d probably suck on that set, going for pins in every match.

Well, going to bring this up again.
If there are enough players (well, we need at least 4), we can play at Tenhou’s custom lobbys.
They are easy and free to create. And as long as at least 1 game is being played per day there it won’t be deleted.
…And if it is deleted, we can just create another one.

Also, Riichi-Mahjong does look intimidating when you know no rules, but its not that hard to get used to. Hard to master, though. On tenhou the software itself does all of the math, wall-bulding, and other similar stuff. There is no way to get chombo, so even total newbies can get used to the game fast.
If anyone who has no experience with game is interested in learning I think that any of the actual players would be glad to give you a couple of advises and play an educational game with you.

I would be interested in playing and I can help teach too. It would be fun to play with some kaza people!

I’ve never played but I do have interest, let me know when you’re willing to teach!

I’m fairly free for the next few weeks, what time would work well for you and what time zone? Same goes for everyone else in here who’s interested, if we can find a good time that works for people I can try to organize something. I ran the reddit mahjong club for a while so I have some idea of how to do these things.

School starts next Thursday for me but until then pretty much any time is fine, my timezone is UTC+9

I am living in GMT+7 timezone, but I can easily find time to play 'till 10th of January… after that I would have to know the exact time of games to check when I can join them.

I have some experience with teaching mahjong basics to people, though mostly with an irl-mahjong.
Has been pretty much running a local mahjong club for ~2 years.

I am not really all that strong as a player, when I’ve actively played I was a 2nd dan on Tenhou, but that account is long dead.

I’m GMT-8 but I’m free during most of the day on most days. I’m not really feeling like organizing people to find a time right now but if someone else does I’ll definitely be there if I can.

also GMT-8 but I’m not that familiar with riichi mahjong but I’ll play if you need an extra. Probably only on weekends though.

Getting tutored sounds good. Last time a written guide was posted here and that was kinda overwhelming, so tutoring sounds more appealing.

Well, at least it does make enough people for a session. Now we will have to decide on time.

Hello, I haven’t been here much but someone recommended I post this here. Recently I dug up and re-edited a guide on how to play mahjong I wrote a few years ago. I think it’s a pretty good comprehensive guide for learning the rules if anyone is interested in learning. I’m still working on the strategy section and the formatting is a bit of a mess but all the rules content is there and good to go. Here it is:
https://docs.google.com/document/d/1v-HQy07qiQwJXQF90-fZHgU_U0hdvUmDdC6X3w9sIA0/edit