… Have uchikoshi stories ever been “down to earth”?

Well, yes. Sure we have to suspend our disbelief to a certain degree like any story expects us too, but his stories are usually sober, well-constructed and serious in overall tone. I’m not sure we are on the same page on what down to Earth means in this case.

For example, Punchline 11 felt just kinda dumb to me. The characters team up against the US army in extremely absurd ways, Ito manages to pilot the mech flawlessly just because it’s the same U.I. as her game, armed professional soldiers just decide to up and leave after being beaten up by a girl in a costume (who didn’t even Uberfy), every single attempt at drama just fell flat for me amidst what seems to be a very happy-go-lucky episode where anything is possible.

So yeah, perhaps my problem is that Punchline doesn’t take itself seriously. And when it does, it just doesn’t mesh well with all the crazyness for me to feel even a bit emotionally invested in it.
Sadly, the 180º I was hoping for is not going to happen, it seems.

I’m not sure we are on the same page on what down to Earth means in this case.

Yeah I think we do have different ideas on what down to Earth means, haha. I thought it always meant something more rooted in reality

Down to earth, in my books, is used as a way to describe someone that is truthful and realistic. I don’t think it really works when describing a story though… It sounds weird when used like that. It’s more of a person or opinion descriptor.

I think “grounded in reality” would be the better term to use.

But that’s what I’m saying. If you compare Punchline to Ever17 or the Zero Escape series, those are much more grounded in reality and the characters react much more realistically to whatever happens in the story. Sure, the sci-fi can go pretty far, but it’s just a matter of suspending your disbelief (not to mention how the scientific topics used for such stories are usually researched and respected).

So yeah, Zero Escape is something much more rooted in reality than Punchline, for an example. My problem with Punchline is that it never quite commits. When you think the story will go for a more serious approach, the characters just start goofing off again and some crazy stuff (like a mecha battle) happens. Now, this is something that CAN work, but for me Punchline is just never on right note. I thought this would happen after episode 9, but not quite so. Episode 10 was meh and too melodramatic for me, and episode 11 was just too goofy (yeah, 5 girls and a ghost managing to hold off two armies at once for more than 5 minutes is just too goofy).

Oh okay, I think I get what you’re saying now, yeah. Hmmmm Punchline does seem like the odd one out in that case

Well, I just watched the last episode of Punchline and…it was rather dumb. At least for me.

The series was just a huge letdown for me. In the begginning, it was funny, but then it began to hint it was not what it seemed and I was pumped. But it never quite commited, it’s gaudy and absurd style remained the same, and whatever seriousness or drama it tried to pull off never worked for me, since it was either too rushed or too melodramatic. Coupled with the persistent fanservice and overall goofiness sometimes right after the serious parts, it just never went past the line of “this COULD be kinda cool if worked properly”. Some twists just felt like they came out of nowhere and others were painfully obvious.

The last two episodes specifically were just dumb. 5 girls and a ghost taking up an army of superhumans AND the US army at the same time and winning almost flawlessly? Come on. Not to mention the extremely corny drama going on with the three main characters. The last scene between them actually made me laugh, and I’m pretty sure that was not the point.

Unfortunately, this has been a huge letdown for me. Even with Nakazawa at the helm, I don’t see how the game version could possibly be any better. Sure, if you turn your brain off it can be fun…but the problem is Punchline quite clearly wants you not to as it goes on, and it just results in a pretty big mess. And that’s a shame, because there is indeed some potential lurking in the shadows here.

Yeah, if they kept going with the style of the scene where Yuta and Narugino have their talk, or when Yuta has to write U-turn in the book, it’d have been great.
Still, I’m looking forward to what the VN has to offer. The anime was clearly a “now read the VN!” story.

Mmmm… I enjoyed the series for the most part, but it just kinda ended abruptly, I felt. Like it was going in a good direction but never quite went as far as I would’ve hoped.

They are saving the good stuff. The anime was like an advertisement, I guess.

Just finished the ending and it was toooootally disappointing. For starters, they lacked any explanation of how some things was interconnected. The bus hijacking apparently just randomly happened, cinnamon just so happens to increase ghost powers, and so on.

However, what disappointed me even further was the sudden comeback of the unfunny comedy that we haven’t seen ever since episode 4. Everyone doing the cheermancy dance? Giving panties to Yuuta’s altar as an offering? Here I thought it graduated from these unnecessary trivialties, but I guess it realized midway what it was really supposed to be: a show about panties

So fuck this, punchline sucks, and I regret continuing it.

So… Zero Escape 3 has been officially announced by Aksys… Which means no Japanese release? Heh

Well, Zero Escape 3 has been officially announced by Aksys and Uchikoshi himself at anime expo:

Good news for most here, I suppose.

AND Sekai will localize G-Senjou No Maou too. Very exciting times to be a VN fan.

I moved a post to an existing topic: General Visual Novel Topic 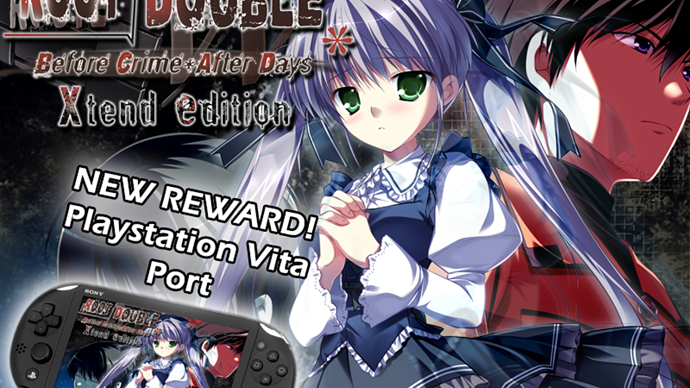 From the makers of Ever17, one of the highly acclaimed Visual Novels, comes a title called Root Double which wants to release on Steam!

I want to back at the messenger bag level…but I already upped my pledge for the tshirt. My collector soul must be checked at some point. >_<

Man I want this project to succeed so badly, but it doesn’t look good at all.

Somehow Libra of the Vampire Princess managed to go from grim to funding 3 stretch goals so I am going to stubbornly hold out hope.

I don’t know if Libra is any good, but come on, Root Double looks much better. Here’s hoping Sekai makes some more moves and it gets funded.

I am backing both - and looking forward to both but Root Double is going to a very different class of experience.