Everyone who’ve played Key vn at least once must have noticed that they use their own cursors. Some of them are truly beautiful and it might be nice to use them instead of default ones.
Let’s see how you can do it. I’ll be using Summer Pockets as example but it should be pretty similar for any other Key game.
First of all you need to extract the image from game files. In case of SP its hidden in g00\__sys_mw01_mcur00.g00 There are different ways to extract it from this archive, I recommend using Crass.
Once you’ve done it you’ll get .bmp file with the cursor. However, Windows uses .cur for static and .ani for animated cursors so you’ll have to convert it. The simplest way I’ve found is to use AniFX to create new cursor and then import our file.
Once you’re done with it you’ll only need to open your PC’s settings and change the standart cursor, in case of Windows 10 you can find it in personalization\themes, in Windows 8 you’ll need to open mouse settings via control panel\devices.
Success! Also, it would be a good idea to create alternative versions for other default cursors. Otherwise you’re going to see these two: 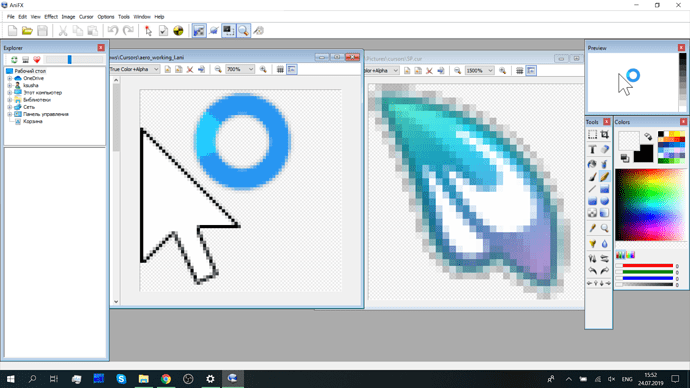 image.png1920×1080 399 KB
take each others places pretty often and so on.
If you’re interested here is the set of SP cursors I’ve made: https://drive.google.com/open?id=1HVeKymqeLj0C28y4TDNr8ea0bFCTbEvR
English ver of Crass can be found here: https://haibara4cgrip.wordpress.com/my-cg-ripping-tools-v2-7-english/
Official AniFX downoad: https://portableapps.com/apps/graphics_pictures/anifx_portable
If you’ve found some better way to do it or you’ve successfully created another set and want to share it or some of the explanations above aren’t clear feel free to use this topic.
P.S. I’ve got no idea about the reason, but Windows 10 seems to malfunction when folder with cursors is not in C:\Users\Public so if you’ve got some problems with it - try moving folder there and change settings once again.
6 Likes