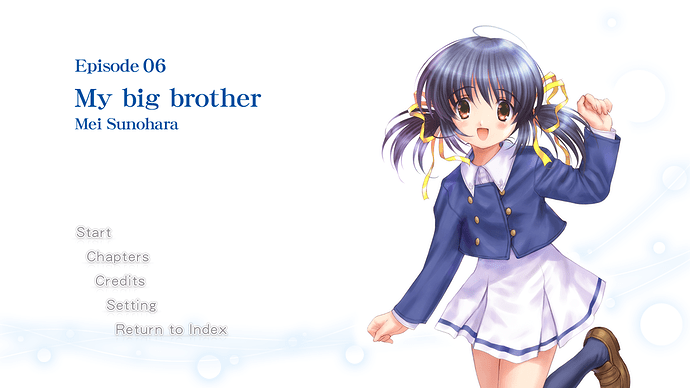 Spoilers for the vanilla CLANNAD are permitted, but please tag references to other Side Stories with the [spoiler] tag, providing adequate context in parenthesis.

How would you rate this episode?

Looks like this one’s set quite a while in the past, when Sunohara is still in middle school. It’s fun getting to see what Sunohara was like back then; evidently still an idiot. Wait, he writes poems? Pfft.

It’s really refreshing to see him confront with his bad temper for once and manage to keep his cool. Sunohara gets some really good development here, which is a shame since this is set so far in the past. But hey, more content to show Sunohara’s good side is always welcome.

This was a pretty standard episode. We got to see a bit more from middle school Sunohara: an idiot who still have some motivation in his life.

The anger management we saw from Sunohara was nice to see, but it wasn’t what caught my eye. The soccer games were pretty well narrated, and even though the second game development was a bit far-fetched, it was still pretty enjoyable.

I’d give this route an average 3, but the music and sound effects made me give it a 4. The music during the second game was on point, and there were plenty of sound effects for every situation. In some strange scenes, difficult to imagine due to the fast paced action, the sound effects complemented perfectly what was happening and helped the reader understand what was going on.

So, overall, a nice episode, not the best plotwise, but the execution was fantastic.

This story is similar to Mei’s route in CLANNAD in a few ways, in that it tends to revolve around Mei and Youhei’s relationship as little sister and big brother, respectively. This story takes place before any of the conflict in that route begins, so it makes sense for it to set up what will eventually happen.

The story goes that Mei is walking home from school and comes across one of Youhei’s soccer games. His recklessness earns him a five-day suspension which, Youhei being Youhei, he has no problem with. This upsets Mei, and she tries to prepare him for the soccer game to come, to little result. However, a chance encounter with Youhei’s rival gives him a personal reason to win the game, while Mei cheers him on. It’s a good demonstration of their relationship, but like most of the other stories so far, not much significant happens.

Can’t wait for the next episode!

Looks like Sunohara had been screwed over in sports even before he got into high school. I can’t help empathizing with the guy. I mean, what the heck are you supposed to do when the refs are deliberately missing calls?

This story was mostly okay, but that scene in the middle with the bully was extremely uncomfortable. The dude was sexually harassing a girl who couldn’t be any older than ten! And yet, Sunohara gets kind of buddy-buddy with him after the game? That’s creepy as heck! Touya, what were you thinking? Why couldn’t they just have him push her over, or trip her? That’s simpler, not AS cruel, and takes away any disturbing undertones that just distract from the story. Why didn’t he call the police, or inform an authority figure, or at least get a little angrier? I wouldn’t jump to the conclusion he was doing that were it not for the creepy nature of the rival’s comments. I get it’s supposed to test Sunohara’s patience, but that shouldn’t come at the expense of awkwardly exploiting a young girl.

Well Mei’s a good character so a POV story from her is good but as has been said it covers quite similar ground to Mei’s route in the main story. At least we see here from the past that Mei is a strong positive influence on him and once he’s away from home at the High School the loss of that results in his stupid action and being banned from the soccer club. This does help to show why Mei visited her brother in the main story afterwards and that the sibling bond is a long term one.

I’d agree too the the harassment scene is a bit OTT and could have been watered down without detracting from it, although the point was to show Sunohara staying calm in the face of severe provocation this could have been achieved with just verbals really.