Ciconia no Naku Koro ni (lit. When the Storks Cry) is the newest coming entry in 07th Expansion’s When They Cry series, releasing 8 years after Umineko came to an end. Use this thread to share your thoughts and speculations of the game in the leadup to release! I’ll be keeping this opening post updated with all the information we know so far. Most of this is speculation and subject to change. Let me know if any of the information is incorrect or you have anything worth adding. 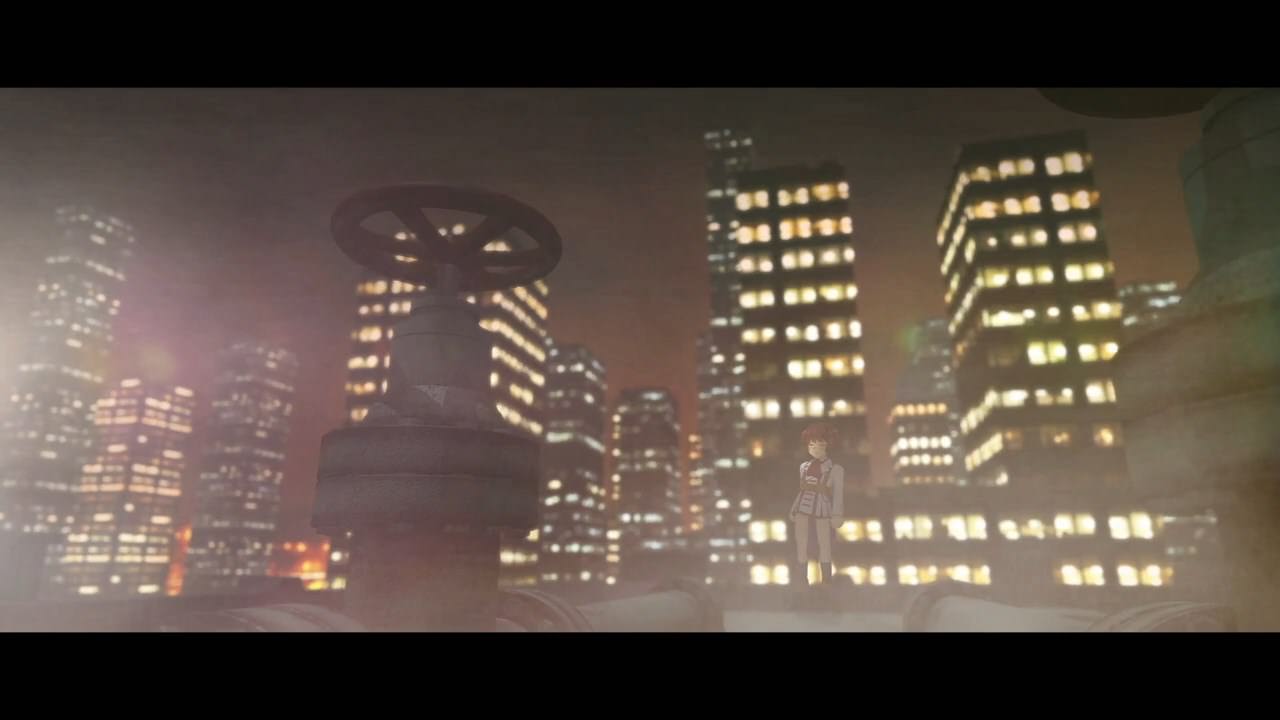 The story seems to revolve around an event called the ‘International Battle Standard Festival’, a tournament in which elite squads of Aerial Augmented Infantry called ‘Kettes’ representing various ethnic groups do battle. These infantry seem to be either androids or cyborgs, and have the capability to fly through the air at high speeds. While we don’t know much about the festival yet, motivations for participating in the Battle Standard Festival include prestige, research, and political reasons. From the Hong Kong flags depicted in the trailer, it’s speculated that this Battle Standard Festival will either be taking place in Hong Kong, or a Japanese city with a large chinatown like Yokohama.

As for what kind of story it will be, we can only speculate. From the information we have so far it seems to be like an action-packed political thriller, quite a contrast to the smaller-scale murder mysteries from previous WTC titles. However, the end of the trailer does depict the visual of ‘kakera’, a staple of the 07th Expansion metaverse, so we may yet see some interdimensional shenanigans unfold.

There also may or may not be connections to Ryukishi’s ‘Haworthia’ audio drama released last year. He’s being very vague and confusing about that. 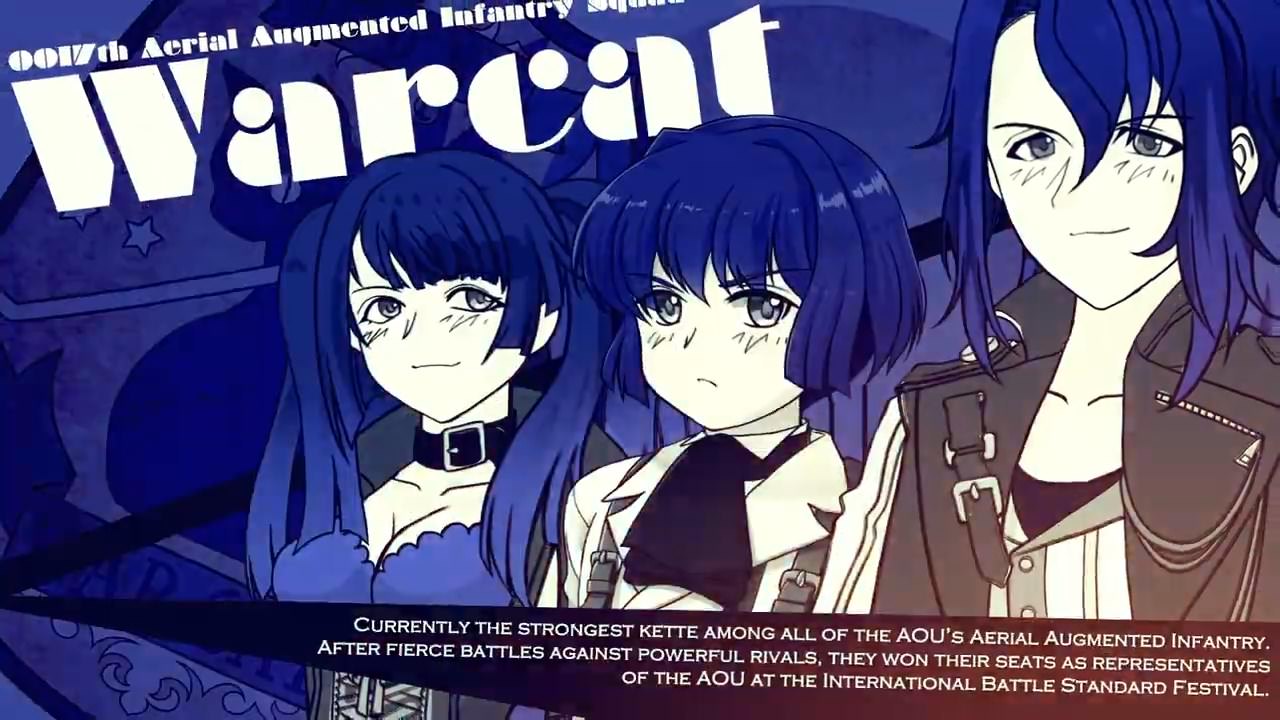 Currently the strongest Kette among all of the AOU’s Aerial Augmented Infantry. After fierce battles against powerful rivals, they won their seats as representatives of the AOU at the International Battle Standard Festival. 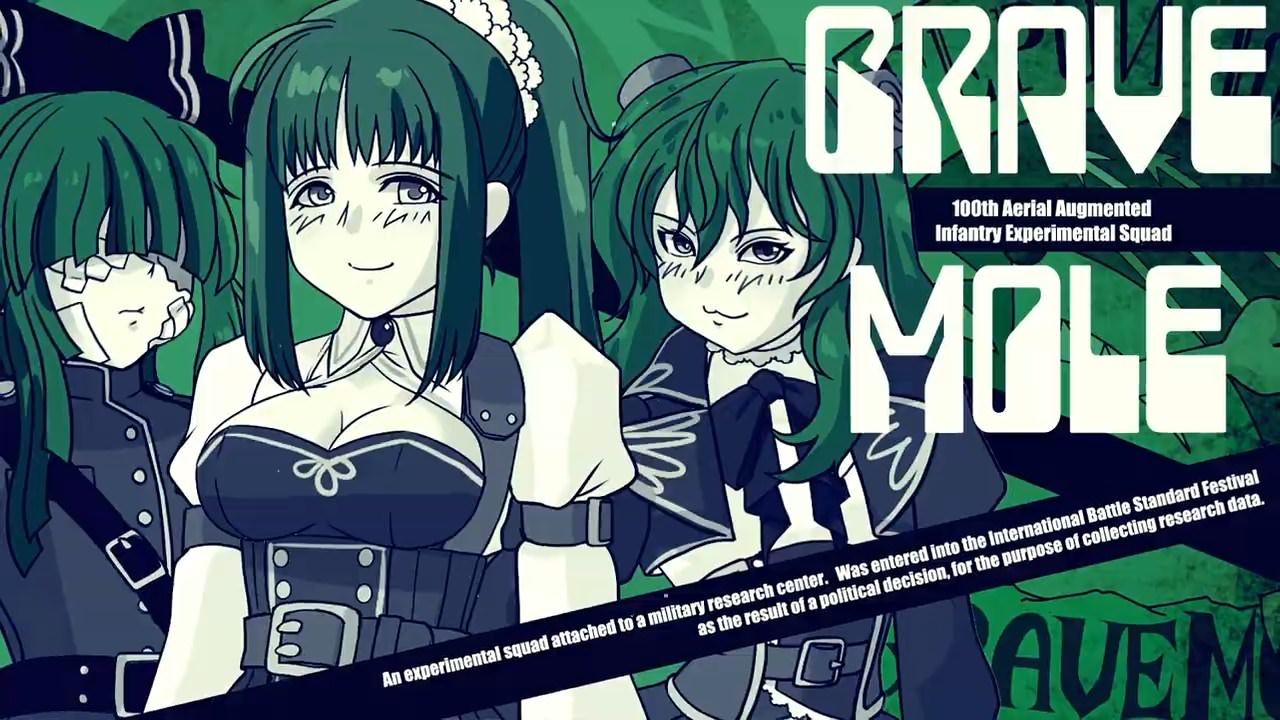 An experimental squad attached to a military research center. Was entered into the International Battle Standard Festival as the result of a political decision, for the purpose of collecting research data. 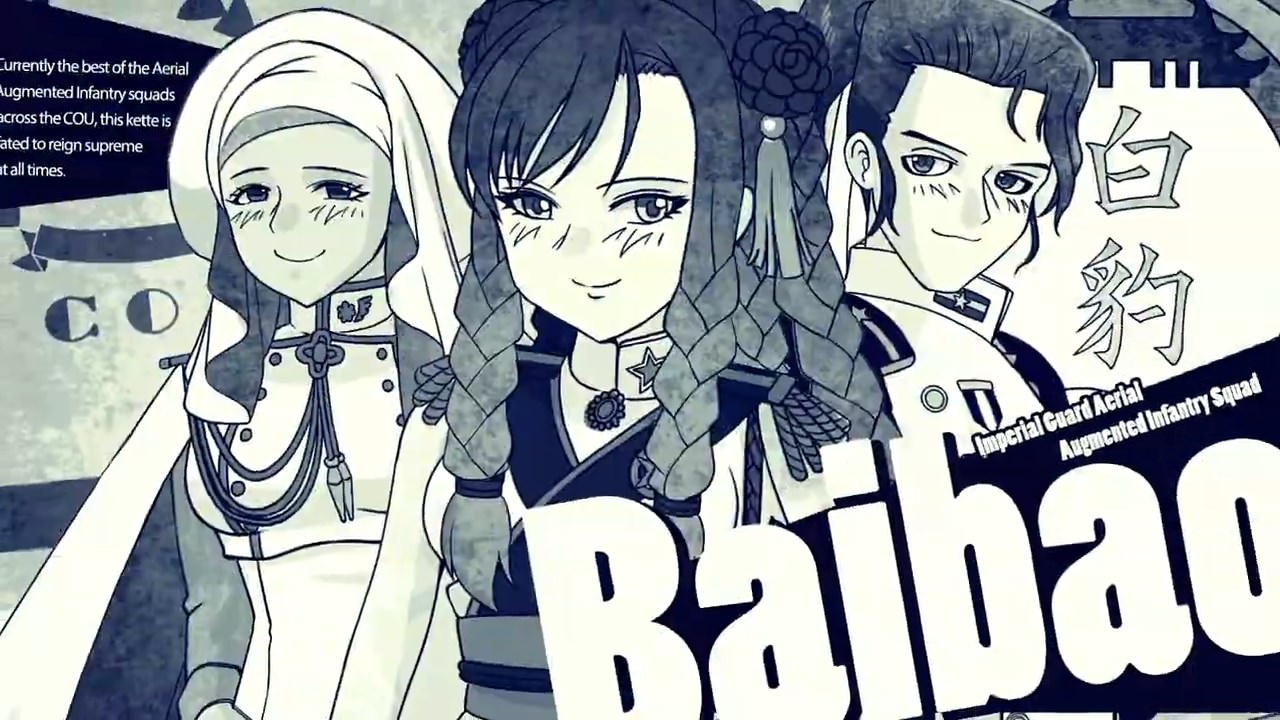 Currently the best of the Aerial Augmented Infantry squads across the COU, this kette is fated to reign supreme at all times. 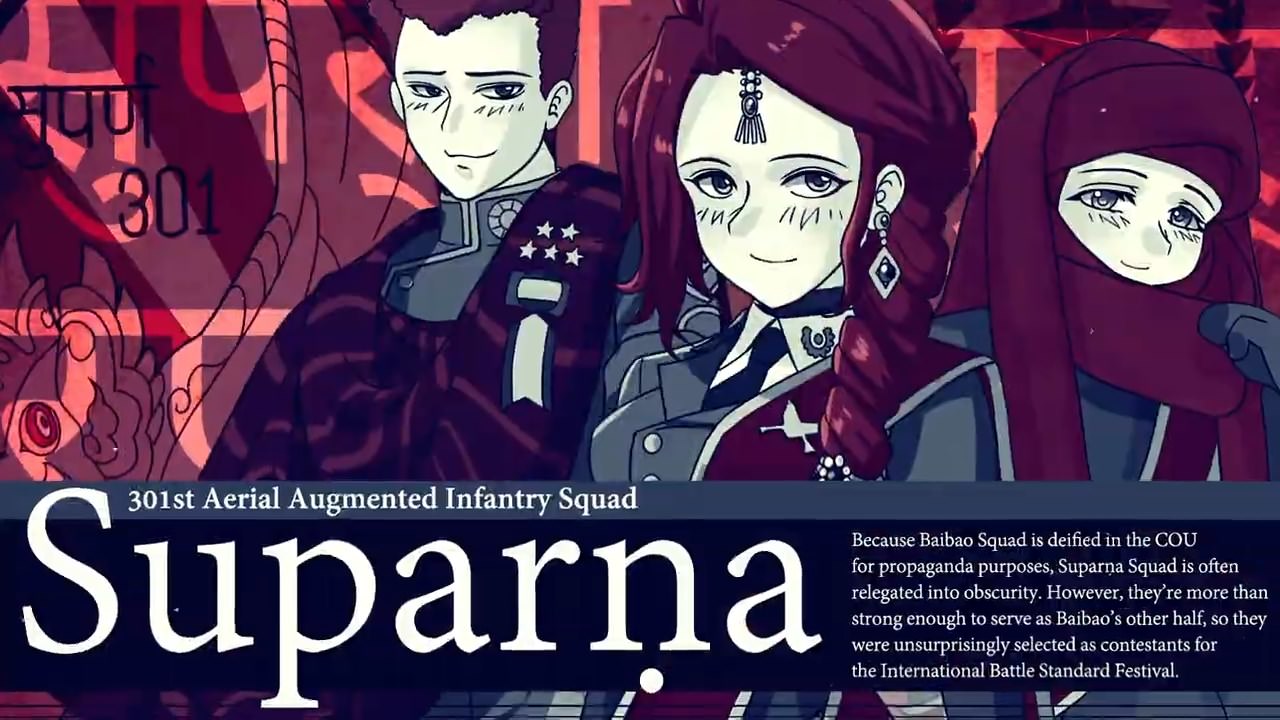 Because Baibao Squad is deified in the COU for propaganda purposes, Suparna Squad is often relegated into obscurity. 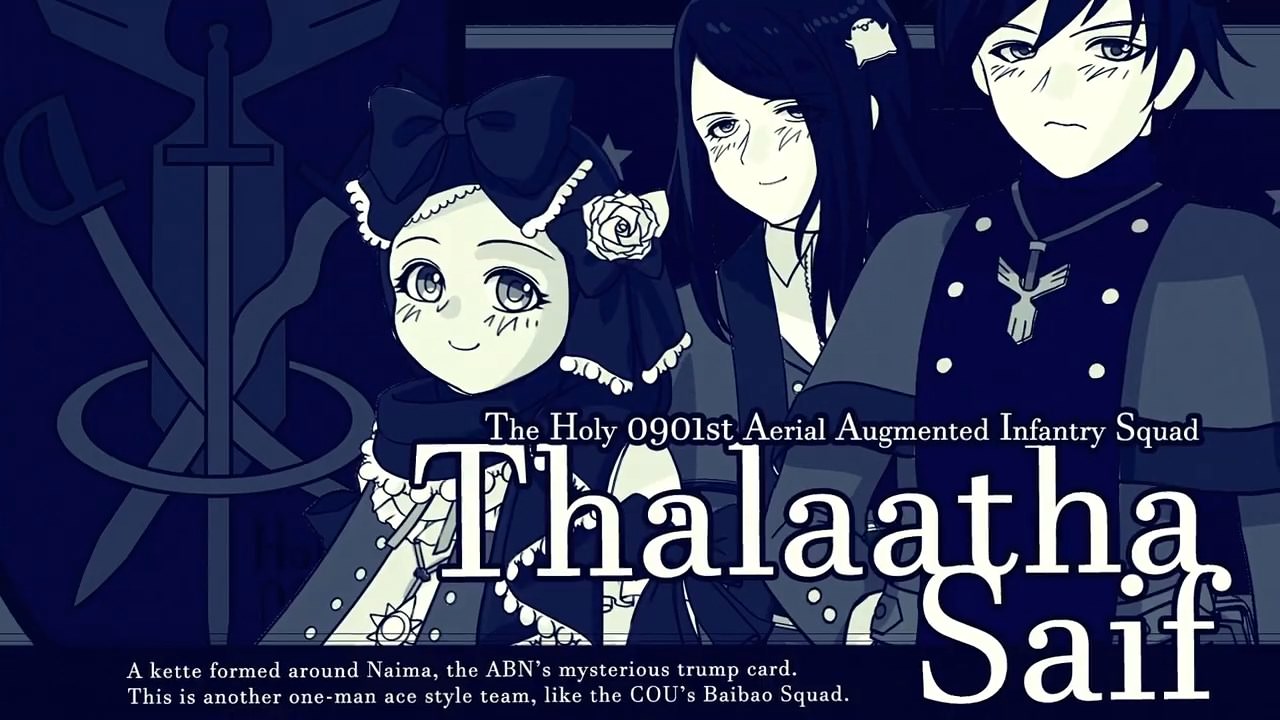 A kette formed around Naima, the ABN’s mysterious trump card. This is another one-man ace style team, like the COU’s Baibao Squad. 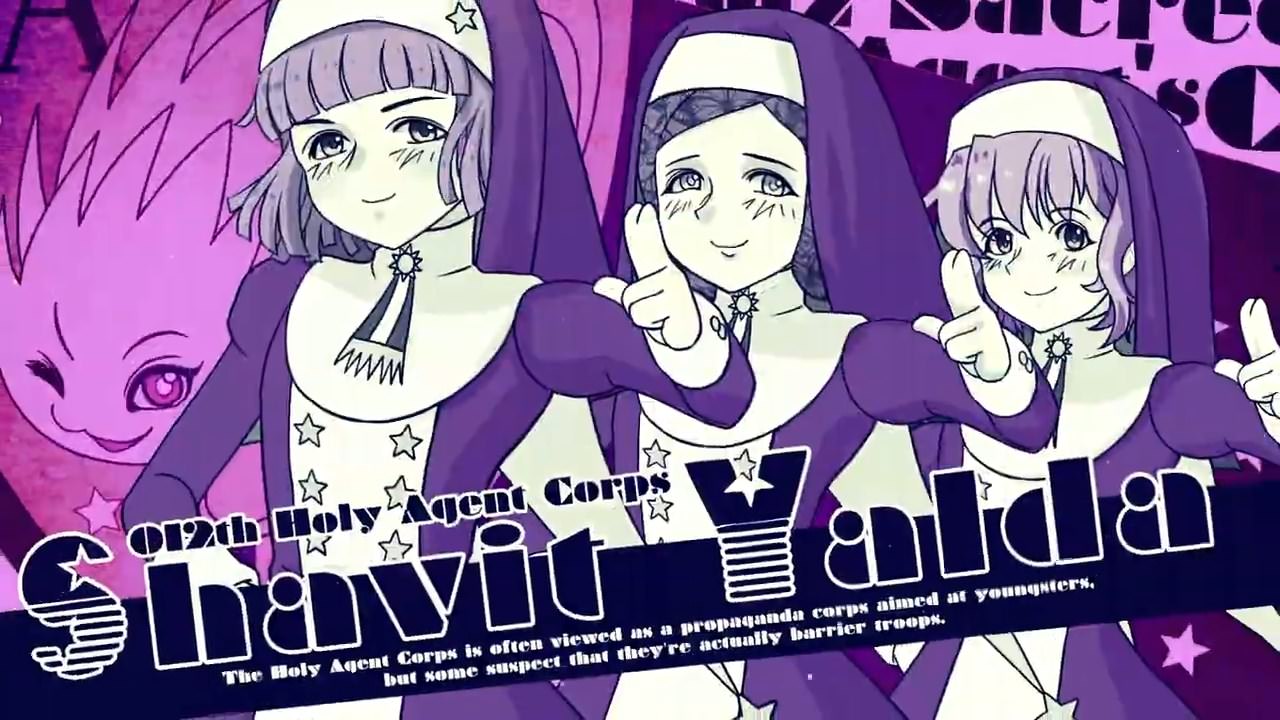 The Holy Agent Corps is often viewed as a propaganda corps aimed at youngsters, but some suspect that they’re actually barrier troops. 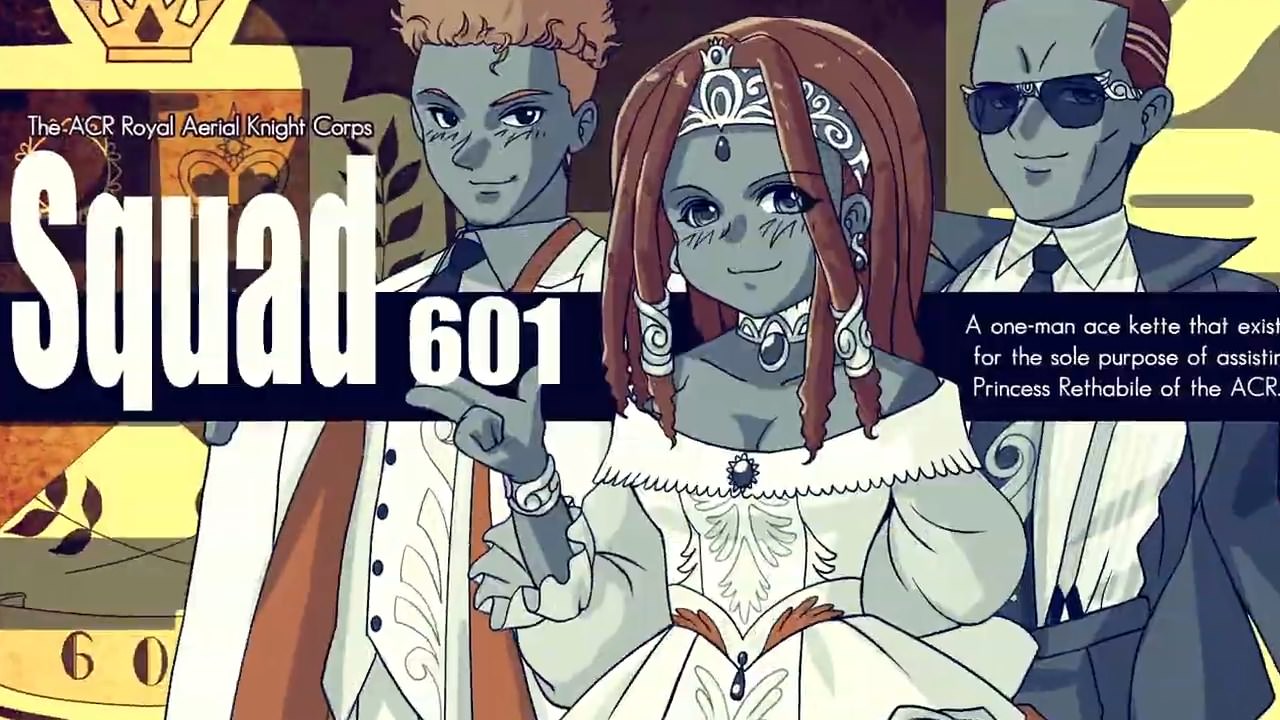 A one-man ace kette that exists for the sole purpose of assisting Princess Rethabile of the ACR. 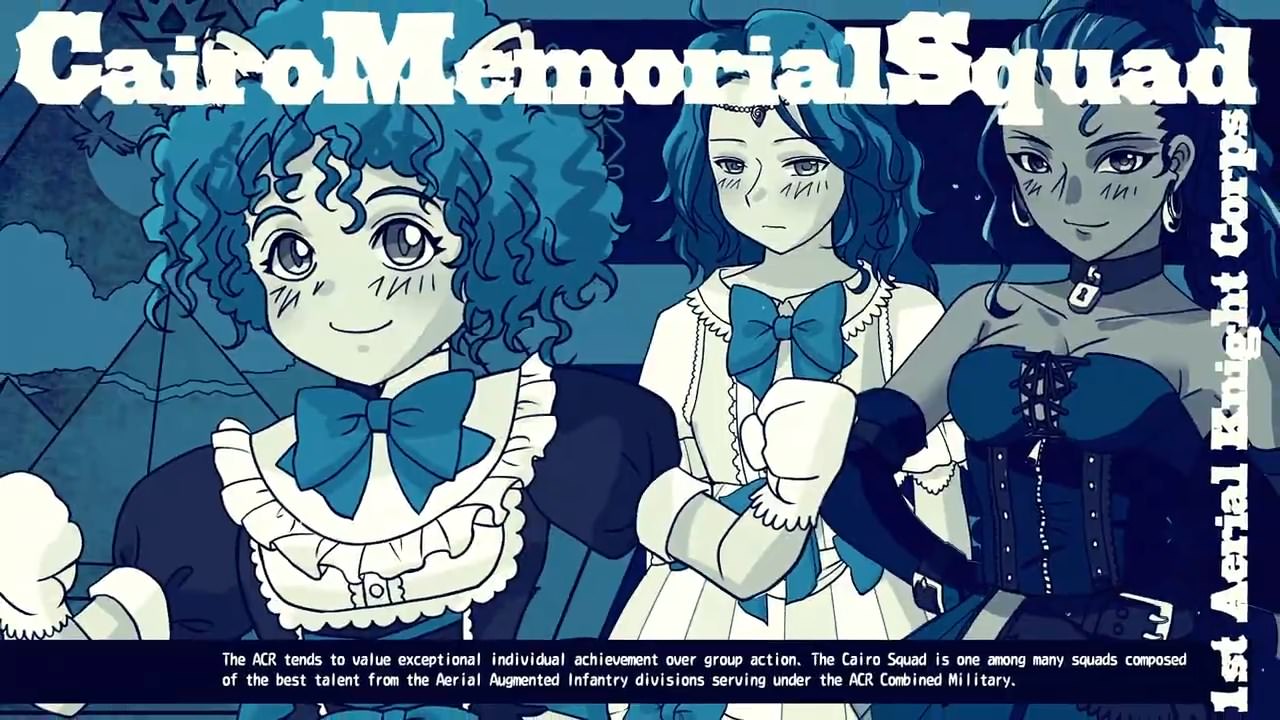 The ACR tends to value exceptional individual achievement over group action. The Cairo Squad is one among many squads composed of the best talent from the Aerial Augmented Infantry divisions serving under the ACR Combined Military.

Which Kette do you support?

A number of political bodies have been named: AOU (Warcat), COU (Baibao & Suparna), ABN (Thalaatha Saif) and ACR (Squad 601 & Cairo Memorial Squad). At a glance these seem to correspond to geopolitical factions, with AOU covering Japan, COU covering China & India, ABN situated in the middle-east, and ACR spanning the African continent. We can only speculate what the acronyms stand for, but we can probably guess the first letter of each already.

The trailer features a conversation between 4 speakers. Speaker 1, ‘Major General’ is addressing two subordinates, Speaker 2 and ‘Captain Okonogi’ (Speaker 4). Speaker 3 addresses a character as ‘Your Excellency’, who may or may not be the Major General. The cut could suggest she’s somewhere else speaking to someone different. Major General and Captain Okonogi seem to be members of the Japanese military, and would appear to have their own ambitions for the International Battle Standard Festival independent of the Aerial Augmented Infantry. Seems like there’s a lot revolving around this event. 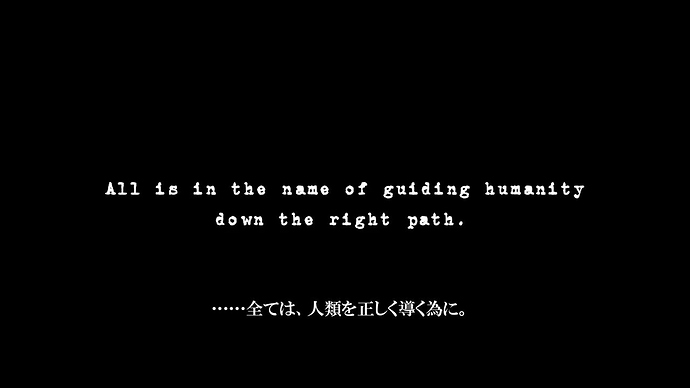 I want it right meow~ 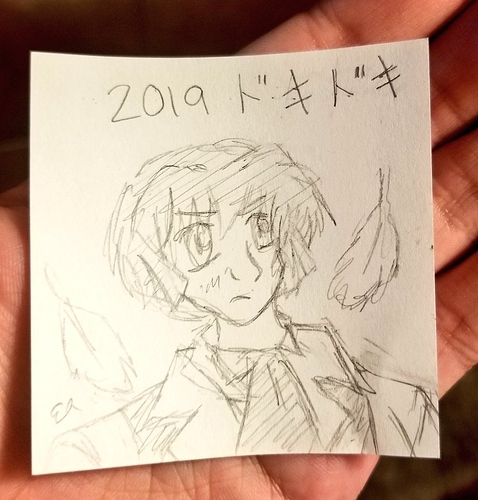 Important discovery about #Ciconia trailer I made with the help of certain literate anon. On the title card of Grave Mole squad the word "GRAVE" covers what appear to be cyrillic letters spelling word "ГЕРОИ", which translates from Russian as "heroes". There's also letter "Ю". https://t.co/tVEDBsSnXS 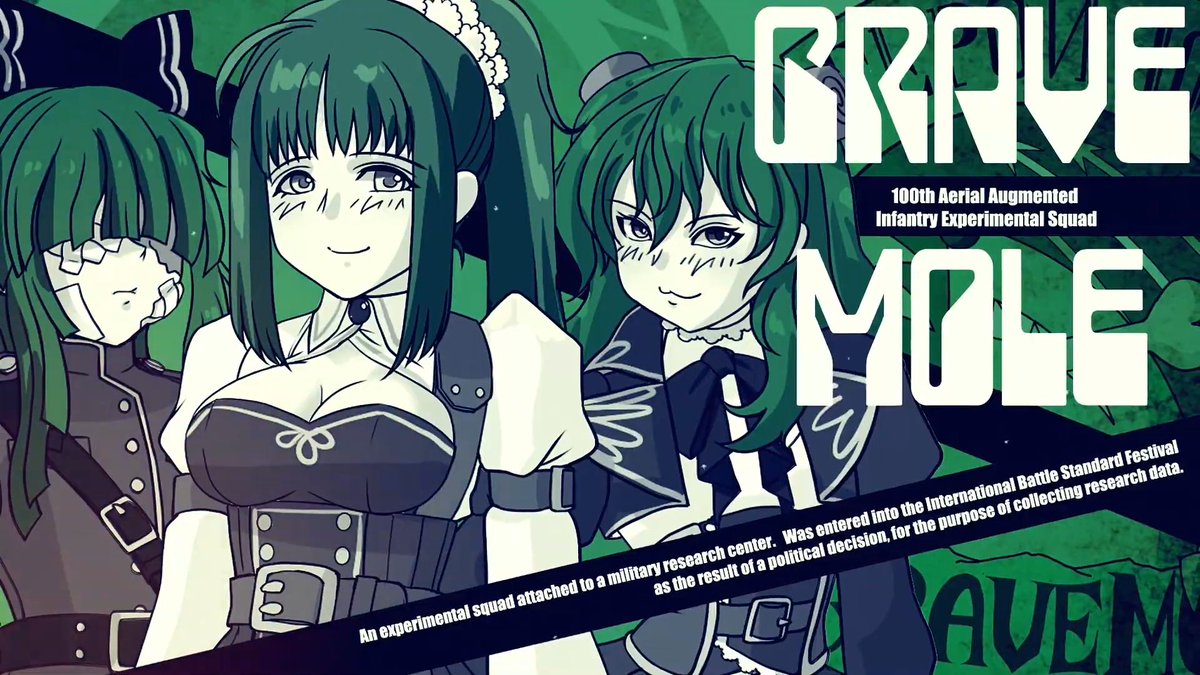 So much hype omg omg
I’m so happy that they decided to hire the Witch Hunt to translate the game, I do believe that they are the MVP that let Umineko become as widespread.
By the way, after the kakera segment you can hear the same glass breaking sound effect that they used in Umineko.

That sound effect is in every 07th Expansion game, I wouldn’t put too much weight on it

Yeah I know, I just pointed it out because it was nostalgic to hear it again hahahaha.
I did not remember that it was used in Higurashi though, I played Higurashi 7 years ago so I have forgotten almost everything.

About its connection to Haworthia, if I remember correctly it some characters were called “automatas” and Haworthia herself was a member of the military, but I’d have to listen Haworthia again anyway.

Haworthia is a distant future sci-fi, so the settings are already very different.

Yeah the settings are different but it would not be the first time that Ryukishi writes a short story and then expands it into a full novel.
Hinamizawa Teiryūjo was written before Onikakushi-hen, there are differences between the two releases, but many of his ideas are the same (the damp project, Oyashiro’s curse, hallucinations, parasites, Rika being the host of the queen insect).

There’s lots of theories floating around. Like maybe they’re thematically connected but not physically. Maybe it’s an issue of layers, where Haworthia is featured as a fictional story inside Ciconia. There’s lots of possibilities.

Orrrr the only thing that will carry over is the music and Ryukishi is just messing with us.

I’m really happy to have so much of the info gathered in one place for this. I am really excited - this will be the first When They Cry I might actually get to read as they come out.

There are so many characters! We have this many with only the pre-release info. While it is hard to say what kind of question/mystery will be be presented, a cast this large will make any kind of whodunit mystery pretty challenging I think. There are going to be a lot of complex and interesting motivations, especially if each team ends up representing geopolitical interests as well as character interests.

So much hype though!

I do wonder just how much mystery will factor into this though. If there are mystery elements, it definitely won’t be in the form of your standard murder mystery!

Yes, it does seem that way. With a cast like this a traditional mystery seems pretty unlikely, but mysteries and unanswered questions are synonymous with the series, especially with the Kakera mechanic, so I am curious what shape it will take.

I think it is good that he is going in a very different direction from Umineko whodunit story though. The best questions in When They Cry are rarely the ones that relate too directly to finding a culprit, but rather the ones that end up being a bit more philosophical. And this seems like a good set up for that in particular.

Since the first game has a big cast up front. I wonder how many characters there will be in the end and if there will be other countries added. I’m hoping for Canada XD

By the looks of things Ryukishi is making an active effort to avoid western representation heh, I guess it’s in contrast to Umineko. I’m all for it personally, too much Japanese media ignores the eastern world when talking about foreign cultures. 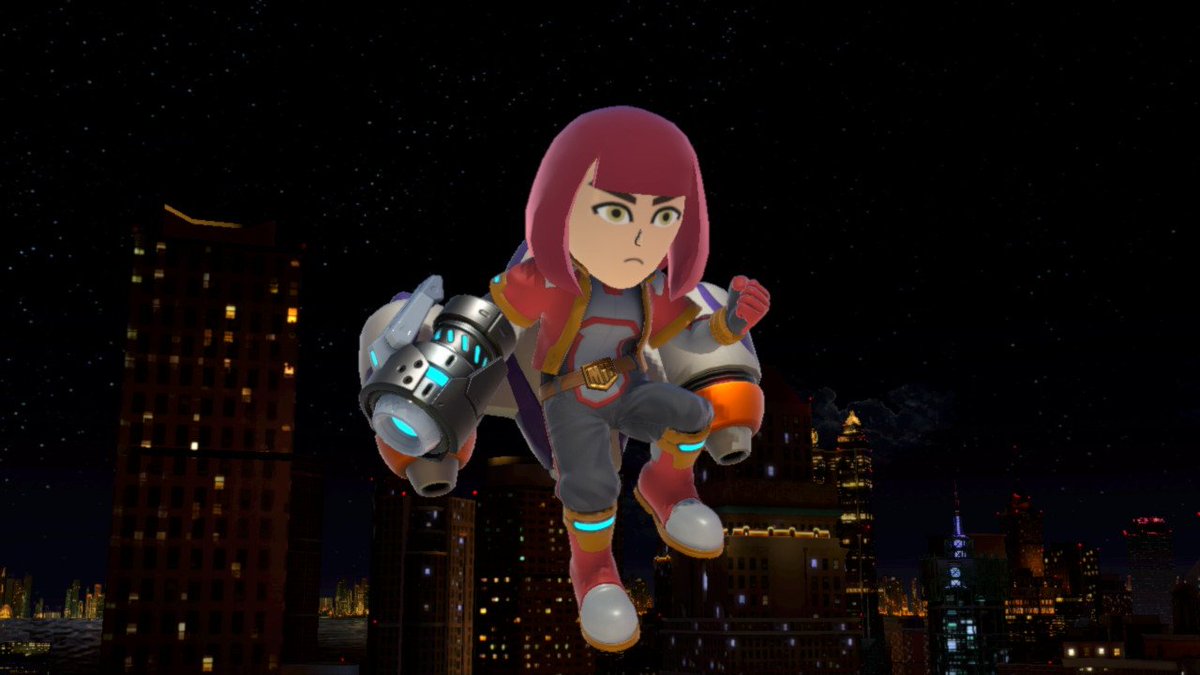 One burning question I have is… Will this story have a time-loop mechanic? I can see arguments for ditching it, but a Battle Royale actually works really well for a time-loop setting, since you can have different people dying in each world, different alliances forming. Makes me think of how Fate/Stay Night worked.

I would be surprised if that was nixed. The implementation may be different, but I have a hard time imagining it just being gone. Besides, as you pointed out the Battle Royale setting provides a good stage for it. And I think it is a really good way to leverage explaining and expanding the ideologies of each team.

I do kind of expect a twist on it though. Since the Battle Royale seems to be an “event” I wonder if everyone or at least a number of characters will be more aware of the loop? That could be interesting.

As Ciconia has a “stronger focus on action with mystery elements scattered throughout.” This part is what interests me the most because this is actually really vague. Is it read as ‘Action with Mystery elements’ or is it mainly ‘Action that has mystery elements.’ This is where most of my speculation is.

a Battle Royale actually works really well for a time-loop setting, since you can have different people dying in each world, different alliances forming.

This part thought interests me lots as because Ciconia has already had world war three. So much of the science from world war three could be interpreted as some form of supernatural when in fact is just science. As for the time-looping this concept has much potential as there is a turn based video game called “Into the Breach.” Whenever you fail the objective (Unless all your characters die) you pick a character that survived to send back in time with their accumulative experience and restart again this is the entire concept of that game. If anything like that game, Ciconia could have at the end of arc 1, ‘Character A’ goes back in time but at the end of Arc two ‘Character B’ of a different alliance goes back in time thus wiping the knowledge and advantage character A had due to his time warp in arc 2.

The third thing that has got me thinking is about the Gauntlet. Is the ability of the Gauntlet different for each character or is it just a stat buff.

Either way due to the lack of information and only not having read all of the When they Cry series this is about as much conjecture as I can really make. But its going to be really fun trying to solve this as a community with Ryukishi fans as it has been reading this Pre-release theories.