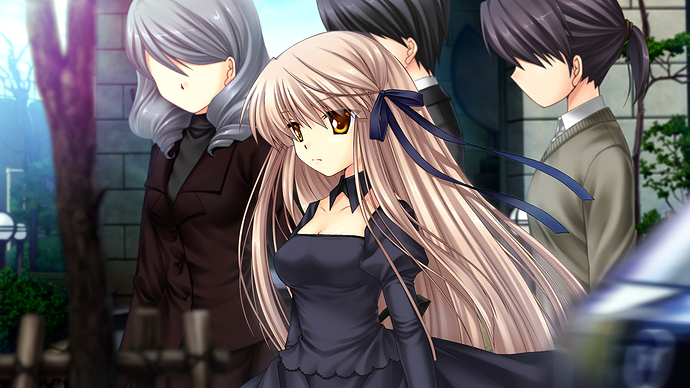 Discussion thread for Akane’s arc & character in Rewrite. Feel free to discuss anything from the route, but mark any comparisons to events outside of her arc, Chihaya’s arc and the common route with the [spoiler] tag.

Her birthday is the 17th of February.

I recently finished blogging about her route, and it’s one of those routes that I’ve bome to like more and more the more I think about it. It’s very draining emotionally, but at the end it’s filled with a strange kind of hope. I was really curious how they planned on handling the ‘villain’ side of the story, and they did it remarkably well. The whole route is about seeking atonement after committing unforgivable crimes against humanity. Her story is one that has kept me thinking for a very long time.

Straight up I think it’s pretty badly written likemostofrewritewhoopsididntsayanything, no mug or even CG for, I’m sorry I forget the guys name, with the weird ears who ended up being the final boss of sorts, along with no real development made him kind of a forgetful fight, the Earth Dragon jobbing was laughable too.

I mean hey, Akane is far from my favorite Rewrite so I didn’t exactly go into the route with much interest, but I do believe it was kind of a mess, if at least entertaining.

I still think the story was there, but it felt like they cut a lot of corners on the route. Like they were running out of money or something. No Takasago sprite or CG was very disappointing.

By the way, here’s a link to my blog~

Akane’s route stands out as a huge anomaly among things I’ve read/played. Before continuing I should probably note that Akane is the single character I relate myself to the most out of every Key game, and that probably contributed a lot to how I feel about her route and what happened when I read her route. Now, something I often do while reading is theorize about what might happen later on in the story or how a character might react to something that happens, and that usually helps me enjoy a piece beyond what might have been intended, but Akane’s route was different. I noticed a little ways into the route that all of my predictions were coming true. Yes, that’s right, all of them. At first I just nodded it off and attributed it to the route maybe having a predictable story, but that didn’t turn out to be the case. Unusual predictions came true; the Key getting hit with an arrow, the year long time skip, even the story of the Holy Women. This didn’t happen just before the events either, a few lines after Akane disappeared I knew where she was and what she was doing. It almost felt as if I was weaving the future of the story as I read it, even though I knew that wasn’t the case. It’s largely due to this strange occurrence that I normally avoid talking about my opinion of her route, other than the usual “I liked that part” or “this part could have been done better,” but it also might be that I’m not quite sure I even have a solidified opinion on it. I’ve read her route 3 times now and I’m still a bit dumbfounded as to what happened the first time I read it.

tl;dr: Akane route gave me superpowers and I don’t even know what to think of it…

Akane is your familiar, clearly.

Akane was the character I liked most out of the main cast. (I disliked Lucia most… but her route was easily my favorite overall.) I followed the habit of leaving best till last, so I had read through all the other routes at this point. (Kotori first, then Shizuru, Lucia, Chihaya, and Akane.)

Honestly… I thought it was great! Maybe it’s because I had just finished Chihaya’s route, but I didn’t expect any romance from Akane’s route. I went in with a “We’re going right into enemy territory” state of mind. So the story starts back as weak little Kotarou which is a bit hard to get used to after all the Chihaya stuff, but as the conflict rises, the growth shown by Kotarou is immense. The different things the Aurora can do was amazing.

Akane’s route answered a lot of questions too… From everything going on in Gaia, to (Kotori spoiler) the crazy behavior of Kagari at the end of Kotori’s route.

The ending scenes were painful to read, even with Yoshino showing how good of a friend he is. But that’s what happens when you get invested in a character, ahaha~ It was the type of ending where you sit and think about it for a while, before realizing how great it actually was. The ending was a bit sour, but that post-apocalyptic stuff had the perfect atmosphere.

It was obvious that the writers intended to add more to the route, and it did feel somewhat incomplete… but I just loved the feel of the route. I imagine this is how I’d feel about Fate/Stay Night if I actually liked the characters. XD

I’d say… it was my second favorite route. (not including Moon and Terra) as at the time of reading it, I was interested in learning about Gaia and familiars. (Lucia’s route had enough romance for me~)

[Spoilered that for you. -Aspirety]

Akane’s route answered a lot of questions too… From everything going on in Gaia, to (Kotori spoiler) the crazy behavior of Kagari at the end of Kotori’s route.

What are you referring to here? I’m curious how you think Akane’s route explains Kagari’s behaviour in Kotori’s route. That’s one thing that still confuses me today.

I don’t think it was ever directly said, but I assumed that Kagari has no choice over her actions. Even if she believes that a memory given to her is a good memory, it doesn’t matter. The only good memory that gets accepted throughout Rewrite is when Gaia and Guardian stop fighting each other. Unfortunately, Kagari doesn’t know this. She can only guess at what a good memory is.

In Kotori’s route, Kagari states she has found a good memory… yet she still attempts to sing the Song of Destruction multiple times. Why? When Kagari finds good memories from being around Kotarou and Kotori, and realizes that they aren’t the memories she needs, she becomes uncertain of what a good memory actually is. Naturally she becomes confused and gets angry. When Kagari gets angry, she goes insane and her intelligence rises instantly. The intelligence increase takes her to the same level as a Holy Woman, which leads to a… twisted view on life… (‘Life’ is pointless and ‘Love’ is a lie) The simple-minded Kagari suddenly became incredibly intelligent, and because of this, she was determined to destroy everything… before they even left the forest.

I guess that was my interpretation of it anyway…

Hmm, I really like this interpretation. It definitely aligns with the impression I had of her. Thanks for the insight! I’ll draw upon this idea in my upcoming blogs.

Akane’s route is hugely lacking on the visual presentation side, sure, but I felt that the Earth Dragon and Takasago fights were the best in the entire game.
Like, you have Kotarou literally using the power of natural selection to defeat a dinosaur, how is that not incredible? Even though it’s just a translation, I felt the power of the writing in that scene shining through… it’s just unbelievably good.

Akane’s route as a whole was a huge step up from the rest of the game… in my opinion it’s easily the best route. There was a great lot of it removed to fit better with the length of Tonokawa’s routes as well, which is… disappointing. Wonder if they’ll add it back into the PSV port.

I think it had some of the best fighting of all the routes, though the Terra route did it a bit better~

I think the best thing about the Earth Dragon fight is learning that Kotarou can essentially copy any weapon if he has an image of it. Unfortunately, Kotarou doesn’t know much about weapons ^^;
This is useful information in explaining the part of Chihaya’s route where after being traumatized with the image of Midou burning, Kotarou was able to create a Fuego-powered weapon~ Even if that wasn’t the intention of the writers, it seems like the only reasonable explanation.

It’s strange that the Ribbon-styled weapon is powerful when used by Kotarou and Sakuya, but Kagari manages to be fairly weak in comparison.

In Kotarou’s case it’s probably because it’s connected to his Rewrite power. With Sakuya, well, whatever process he went through that turned him into a tree also made him immensely powerful, as long as he has someone strong to contract with… seems Chihaya has a lot of potential as a Summoner.

Kagari’s ribbons can cut through almost anything, but she herself is fragile, can’t seem to modify them in any way, and in most routes lacks the humanity to think up creative uses for them.

This is useful information in explaining the part of Chihaya’s route where after being traumatized with the image of Midou burning, Kotarou was able to create a Fuego-powered weapon~

I’m adopting this explanation. “Midou came back from the dead” is just too cheesy for me to stomach XP

As for Kagari being weak, maybe you could put that down to her innocence? Kotarou gained strength by imbuing his aurora with bloodlust and the power of evolution. Kagari doesn’t really have that.

I’m adopting this explanation. “Midou came back from the dead” is just too cheesy for me to stomach XP

And yet you know this is exactly what Tonokawa intended it to be.

Because I can, I now dub this point of time to be devoted to talking about Shimako.

She only got a sprite because she was a loli. She’s also the only sprited character who wasn’t introduced in the common route.

She also was probably the strongest summoner outside of Sakura and Midou’s corps.

Honestly when I first saw her, I thought she would have some big part in the story