Planetarian ~the reverie of a little planet~ review 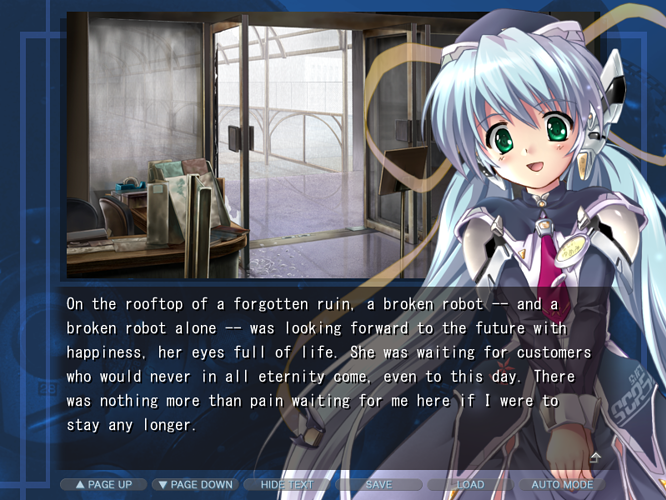 After a relatively short wait, planetarian ~the reverie of a little planet~ has been released on Steam by Sekai Project! This is marks the very first time one of Key's visual novels has received an official English localisation on Steam. This marks the beginning of a new era where people all around the world can experience Key's stories through completely legitimate and very convenient means. A whole new market is opening up to Key. From here on out, the visual novel industry might just change for the better. I was given the opportunity to try the game early to do some bug testing, and to prepare a review to commemorate the release. Reviews aren't really my strong point, but I gave it the best shot I could. I tried to write it to be helpful to everybody; whether you're a Key fan who's played planetarian many times, or you're somebody who's never heard of a visual novel before. Please take a look.

planetarian ~the reverie of a little planet~ is a visual novel developed by Key, a monolith of the industry renowned for their ability to repeatedly bring readers to tears through their stories. planetarian is a completely linear visual novel - in other words, the entirety of the 'gameplay' revolves around pressing a button to advance the dialogue until you reach the ending. If you are unfamiliar with Key or the visual novel medium, you can learn more from our Key information page. For a brief history, planetarian was originally released to audiences in November of 2004, a few months after the release of their blockbuster game Clannad. planetarian is very short compared to Key's other works, with estimates of its total length lying at around 3-5 hours reading time. It is generally thought of as a little experiment by Key to see how well a deviation in their standard storytelling formula would sit with their market. While it is quite the departure, I've found that most people I've spoken to speak of the game very highly - one even called it Key's best work. But let's not get too carried away with comparing it to Key's other works. I expect that not everyone here is familiar with Key in the first place, so let's start from the beginning. How does planetarian hold up on its own?

The story of planetarian takes place in a post-apocalyptic future, set approximately 30 years after the collapse of civilisation from a war which turned cities to rubble through bombardments of biochemical warheads, halving the world's population successively for years until no countries existed anymore. The story follows our faceless protagonist, referred to only as 'The Junker', who we find is exploring the ruins of a destroyed city in search of resources to survive. He is a man who has lived each day struggling to survive in a cold world devoid of kindness. In an ironic twist of fate, while exploring what he believes to be a military installation, he discovers a kind and cheerful girl congratulating him on being "our 2,500,000th customer!". Perplexed, he lowers his weapon to discover that the girl is in fact a robot named Yumemi that had been abandoned in the city for 30 years, remaining behind as a guide to the city's planetarium. The man and the robot spend their time together in the planetarium, and gradually, the man's frozen heart begins to feel a warmth that he never knew existed in the world. I'll be moving into some of my analysis of the story now, so if you wish to remain unspoiled, please skip the next paragraph.

The genius of planetarian is its incongruous combination of a soul-shattering world and the unstoppably cheerful girl. The happy music and pleasant appearance of the girl contrasts the bleak, nihilistic worldview of our protagonist, as told through his narration of everything he sees. The girl presents him with a bouquet of fake flowers, and his first thought is that it's some kind of weapon and he's walked into a trap. After growing up in a world where living is a constant struggle, his every thought and behaviour has been perfectly engineered to maximise his chances of survival. Yumemi is a completely unknown element to him, and she causes him great confusion. In the beginning he doesn't want anything to do with her, but as the malfunctioning girl persists, the Junker begins surrendering to her; gradually forming some kind of miniscule bond with her that neither of them can comprehend. Through her mannerisms and her demonstration, she begins to teach the Junker of what the world before the war was like - the simple pleasures mankind used to share, and the beauty of the stars which are now concealed behind a ceaseless cover of rain. He learns of the hope mankind once had of exploring the stars and reaching unseen frontiers - something he could never hope to experience himself. Even after trying to explain the situation to her, Yumemi continues pampering the Junker as her customer, oblivious to his words. It's a story of two broken individuals in a forgotten corner of the earth, learning about the world through one another, and what it really means to be 'human'.

planetarian may be a short story, but it is one that sticks with you in the back of your mind for a very long time. I still remember when I first finished planetarian years ago. It is as soul-crushing as it is beautiful, and the impact still holds up against the best of Key's catalogue of critically acclaimed visual novels. Thematically, it shares many ties to Key's most recent game Rewrite, which could be interpreted as an attempt at expanding upon the themes introduced in this game in a grander narrative. With that in mind, I would definitely recommend the two as complimentary to each other. If you're perhaps new to visual novels in general, then planetarian is definitely a good place to start. It demonstrates some of the very best of what visual novels have to offer in a tiny package; a small taste of what you can look forward to in the world of visual novels. It also serves as a great appetiser to Key's brand, something to prepare your palate for the main course of Key's much larger games. I'd recommend this game to anybody who appreciates a good story that touches on some really powerful themes. It's not for the faint of heart, but once you've managed to overcome the pain it's bound to put you through, you might come out with something you didn't have before.

So, for those of us who are familiar with planetarian already, how does this release compare to others which came before? This is the second time planetarian was officially released in English, but the game has been readable through an unofficial fan translation for many years now on the PC. If you were one of the few who played the original two versions of the game, I'll start by introducing the updates of Memorial Edition which carry over to the steam release. Firstly, all of the characters have received full voice acting. This includes Yumemi, the Junker, and even characters from flashbacks. The ability to change the size of the window was added, and the fullscreen function has been improved to a borderless window mode, meaning you can multitask while playing the game. For your convenience, you can also access the save and load menus through the right click context menu. I've also found that ctrl-skipping is much smoother than previous versions of the game. For people who've played the English iOS version of the game, the steam version may feel a little bit different, but you may be relieved to know that the Steam release features a new, updated translation built on top of the work of the Insani fan translation. I can safely say that it is the most polished English script of the game to date, and it brings great hope for the future of Key localisations on Steam.

Sekai Project has done the impossible in bringing this game to Steam. It was once thought impossible that any of Key's games whould reach western audiences, but Sekai Project have proven everybody wrong by bringing planetarian to Steam. After seeing the quality of this release, I have no doubt that the Key brand is in safe hands. If planetarian is as successful as each of us here at Kazamatsuri.org hope it will be, then the eventual release of Key's flagship titles on Steam is a certainty. It's my hope that people all around the world support this release. Try it, and if you like it, then spread the word and invite other people to try it as well. Maybe we can cause a small ripple that can grow into a big enough tide to reach gamers all across the world, allowing Key's stories to touch the hearts of people everywhere. It's my sincere hope that Key finally receives the international acclaim that has deserved for a very long time.

If you would like to learn more about planetarian ~the reverie of a little planet, please view our information page here.

Also, if you are interested in joining us, Kazamatsuri.org is celebrating the launch of planetarian by hosting a bookclub for the next two weeks, where we'll join together in discussing the story and contributing artwork of the game. We are even hosting a competition, where the person we choose as our top contributor will win a Key anime DVD or Blu-ray of their choice. If you are interested, you can find out more about our bookclub here.

All the stars in the sky are waiting for you.

This is a companion discussion topic for the original entry at http://kazamatsuri.org/planetarian-the-reverie-of-a-little-planet-review/
5 Likes
LinkThinks September 12, 2014, 6:27pm #2

So it’s better than Minecraft then?

Good review, I love this story. I played about a year and half ago. But it’s linear, there is no choices to be made as far as I remember, so I felt something went missing. I don’t know… I enjoyed Clannad, not so much Little Busters!, I think Planetarian would be amazing if it had several paths… something that could add replayability to it. BTW I didn’t know what Rewrite was about… and I guess I’m about to play this one now. Thanks for the heads up.

Hey Myko! Its great that this review brought you to our community. You should head on over to this thread to introduce yourself to everyone!