The powers in Charlotte, whilst not present in everyone, aren’t treated as being uncommon themselves. Whilst Yumemi and Junker’s meeting is basically acknowledged as being a miracle.

I read the iOS version of Planetarian about a month ago. I really enjoyed the voice acting and being able to switch back and forth between Japanese and English. I haven’t read/played any VNs by Key so I don’t have much to compare the mechanics to.

Anyway, the first half of Planetarian was somewhat boring to me, although I did like the interactions between Yumemi and Junker (I guess that’s what we’re calling him). I was not expecting to cry because I thought I didn’t really care about Yumemi that much, but when she died… the scene between the two characters was so touching and I cried anyway.

I don’t particularly care for the soundtrack much. I do like Hoshi no Sekai and Itsukushimi Fukaki. Do most people know these are arrangements of “What a Friend We Have in Jesus”?
One of the first replies on this thread said something about Mattaki Hito being church-sounding, which I found ironic, because Itsukushimi Fukaki is the church one

I don’t particularly care for the soundtrack much. I do like Hoshi no Sekai and Itsukushimi Fukaki. Do most people know these are arrangements of “What a Friend We Have in Jesus”?

Yeah, I think a lot of people recognize it.

I actually really loved the soundtrack. The whole theme of being in a planetarium and looking at the wide expanse of stars with just you and Yumemi the guide was soothing and almost nostalgic? Nostalgia of something not known.

Anyway, yeah, Yumemi’s death hit me. Not as much because she died, but because of what she said: the whole “don’t let Heaven be split in two” had a great theme of love behind it. I’m super curious to see what they do with Harmonia; it looks similar: robot, abandoned/empty world, he and two others, similar staff as planetarian IIRC…

Do most people know these are arrangements of “What a Friend We Have in Jesus”?

And Yumumi’s theme “The Song of Circling Stars” is actually a melody that’s used at planetariums in Japan. It’s the musical rendition of a famous poem about the planets in the sky.

You guys should really give our planetarian bookclub podcast a listen sometime!

Who’s this girl I keep seeing ? Is she important to Planetarian or something ? 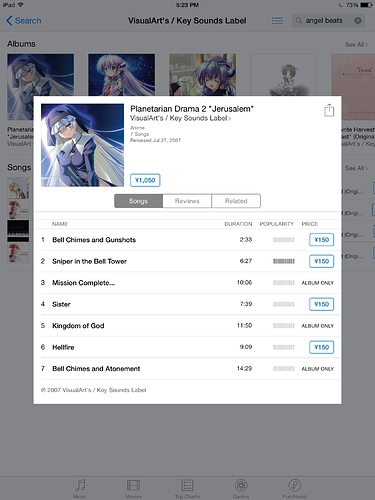 I think that’s the main character of that drama cd.

That’s Achtneun, which is german; a english translation would be EightNine. She is from the Jerusalem story. She is more of an antagonist than a heroine.

Edit: It’s easier to just refer to her as the nun or sister though.

Under the pressing recommendation of @Pepe and @HeliosAlpha, I listened to Hoshi no Hito today. While I liked the ambiguity of Planetarian’s ending, some part of me did want to see if the Junker would make it.

Once again written by Suzumoto, we are put in the perspective of three children who find an old man buried in the snow. They soon discover that this man is a Stargazer, who is described as a man who shows people the stars. The Stargazer tells the eager and open-minded children about the stars, and the subject fascinates them much in the same manner as how it fascinated the more close-minded Junker. (Spoilers beyond) The children decide to follow in the Stargazer’s footsteps and become Stargazers themselves, but the judgement of the village, along with the Stargazer’s own demise, crushes their hopes. However, the village recognizes that their ‘goddess’, which turns out to be a trashed robot, has blessed the Stargazer, prompting the village to reverse their decision on letting the children become Stargazers.

One of the great things about this story is that the emotions are distributed quite evenly, knowing exactly how much and when sorrow and hope should be applied. The major reveal of the Stargazer being the Junker did not surprise me, but the scene involving his death was written so beautifully, I could not help but tear up.

I’ll end by saying that Hoshi no Hito is a wonderful listen for anyone who liked Planetarian, and want more out of the story. Thanks to Pepe and HeliosAlpha for recommending it to me!

I want to talk about Yumemi’s quote “Please do not divide Heaven in two…
that there be no separate Heavens for humans and robots”. Do you think
Yumemi’s prayer conflicts with most religious concepts of afterlife of a
Heaven and Hell?
Despite Yumemi’s religiously acceptive attitude towards various gods (she points out the Greek
pantheon) this belief is pitted against most afterlife beliefs.
the sequel side story when Junker passes away with the robot praying beside
him, he meets Yumemi at the planetarium with her wish to be able to cry
fulfilled, (this is debatebly a hallucination) assume that this is
her ideal Heaven where robots and humans have their afterlife.
Opinions on this religious concept and potential disagreements
that would arise with other beliefs and planetarian’s acceptiveness of other religions?
I haven’t read the prequel side stories but I understand planetarian can make plenty of Christian references but do you think planetarian aligns with a religion?

I think planetarian aligns with religion, but in a very human-centric way. A lot of religions tend to be “exclusive”, ergo, salvation is only promised to their followers (not to generalize, of course). Planetarian might somehow spin this concept on its head by making the excluded party not a human, but one with very human elements, and struggles to find that belonging. It’s a bit bittersweet in a way, but what I think it implies is that, despite our differences, Yumemi wishes for an afterlife where all humans, no matter the religion, no matter the biology (Robots are human too!), get along without having to worry about social restrictions. That does truly seem like a paradise.

It is also her own desire to keep helping out humans, as that is the main reason of her existence, whether on earth or in the afterlife.

There’s also the point that many of us discussed above: Yumemi is more human than the actual humans of this forlorn wasteland of a world.

So I was doing research for my essay about war and I found some really good stuff from planetarian so this is just a c/p of what I wrote for that paragraph.

“Planetarian” has many moments that may not be entirely satiric but are definitely against the idea of war. “Planetarian” is a visual novel that takes place in a post-apocalyptic future where the Earth has been completely ravished by war. It follows the Junker as he meets a sentient robot in a planetarium still preserved after 30 years of war. The robot, Hoshino Yumemi (translated as wish upon a star), is completely unaware of the destruction just outside the walls. The Junker occasionally ponders the start of the war: “…the biggest fools among them pressed the buttons that caused the orbital satellites to fire their germ-bomb warheads. Their intent was probably to lie and wait…and then to quickly seize control. However, not a single person came back.” This quote describes one of the reasons for war. But the war does not benefit anyone, as they themselves are killed in the process. “One year after the outbreak of the war, Earth’s population had been cut in half. That number was halved again by the second year… And again every following year…” This quote demonstrates the tremendous loss of life caused by just a few people in charge. He goes on to point out that the war had lost purpose and even when humans had died out, robots were created to keep the bloodshed going for no reason. After some time spent together, Yumemi teaches the Junker the hope of humanity, that one day people may reach the stars. Through this he realizes how ironic it is, for the war was started due to “global overpopulation and the failure of the Space Colonization Program.” I think this goes to show that war is not as necessary as it seems and may even cause the downfall of our civilization.

Sorry for wall of text but I think that because this is a discussion for planetarian as a whole I can discuss what this background info implies.
Sidenote: Holy crap discourse does not like c/p whole paragraphs at all. It gets all funky and i need to delete random spaces that appear…

@cjlim2007 Yep, absolutely. planetarian is a cautionary tale which tells the of the damage war can cause. You’d probably do well to check out our planetarian bookclub, where we thoroughly explore this, as well as many other themes in planetarian!

I was curious to play it since @Aspirety noticed this game that it’s on sale.(and that I don’t have any money so I missed the chance to play it.

So I finished Planetarian last night and while I’m late to the party, I thought I’d get my thoughts out.

One thing I’ve noticed in Key VNs is that the settings are often very carefully chosen to enhance the story and themes and in no other Key work that I’ve played/read/seen has the setting been so intertwined with the themes as Planetarian. I found the most tragic thing of all was when Yumemi, in all her blissful, ignorant optimism gives the token speech about her belief in humanity overcoming its differences when the chance of such a thing slipped by long, long ago and humanity has been living the consequences for the past 30 years. I think it’s been said before but her character is just the perfect, most tragic juxtaposition for the setting.

I also really like how it seemed to be established that the world was irrecoverable as opposed to most post-apocalyptic settings where there’s at least some semblance of hope. It makes the contrast between the world and Yumemi’s character all the more pronounced where the audience knows for certain that very little of her optimistic beliefs will ever, ever come true.

The whole game felt very airtight in terms of its themes and the story it wanted to tell and I’ve always been a fan of this kind of writing. Fewer characters, simpler stories and microcosmic settings all help to weave tighter narratives with complexity woven in layers rather than in breadth. I’d almost have preferred a little more ambiguity to the nature of the world to add to the mystery and to reinforce the idea that the planetarium was its own little paradise in a dying world.

Like I said in another topic I feel like Planetarian is one of my favourite Key works after Air, though I will have to reserve judgement until I actually read Key’s other VNs instead of just watching the anime. Speaking of which I would actually really like to see this adapted into a feature, I feel like the concept and length would suit it really well!

Speaking of which I would actually really like to see this adapted into a feature, I feel like the concept and length would suit it really well!

Feature-length film do you mean? Because yes, I believe planetarian would be absolutely perfect as a feature-length film. The only other story I can imagine that can fit as well into a film would be Rewrite’s Terra Route

Feature-length film do you mean? Because yes, I believe planetarian would be absolutely perfect as a feature-length film. The only other story I can imagine that can fit as well into a film would be Rewrite’s Terra Route

And I still need to get onto Rewrite but I’m really keen to play through Little Busters first.