Went to a small convention and want people to hear about your experience? Want to share an album of your photos? This is the place to do it.

It’s a bit late, but I went to Sakura-con last year, which is a fairly large con in my area. I spent the first 2 or 3 hours there just looking for something Key related to no avail… No joke though, as I was telling my friends that I was about to leave I spotted a white cloak out of the corner of my eye and thought “no way, that can’t be…” Turned out my original thought was right though and it was a Kud cosplay. Soon after that I found a bunch more Key cosplayers, a couple Key figures, and a Clannad wall scroll. I wish I had gone for more than one day though, it was really fun.

The Key presence at my local Anime con has always been very low. Last year my friend actually did a Kotarou cosplay. Didn’t see one Little Busters cosplay all weekend, despite the Anime being new! If my friend ever decides to join, I’ll nag him to post photos of his cosplay

Most Key presence I ever saw at a con is a bunch of the same two Akane and Shizuru(Which haven’t sold in two years) figs and a couple of Mio and Kurugaya’s last year, I grabbed a Mio.

Course this is a con that’s totally rather casual centric, but hey, I get free accommodation for it so it’s the only one I’ve been to.

Merchandise I’ve found a few things. I remember finding some fanmade Key artbook at a vendor, but it was 2lewd5me so I didn’t buy it XP

I actually went to my first convention this past weekend :x
Spotted not a single Key anything. Merch, cosplayers, etc.
As a matter of fact, there was only one Anime-ish vendor that was in a spot about half the size of the normal booths…

Of course, this was our first convention type thing in our little place in the middle of nowhere ever and a butt-ton of people went- because they finally got a chance to go somewhere local- so it was crazy successful. Got my hopes up for next year! I’ll actually be traveling to more later this year~

I ended up going to a Con in the UK (which tend to be pretty small) but there was nothing Key going on~
I went to go see a Hatsune Miku concert originally, and found out that a Con was taking place throughout the day.

There were lots of Miku, Rin, Len and Gumi cosplays~ A Misty, a Gas Mask child from Doctor Who, Naruto characters, and Kamina from TTGL~ There were a few celebrity guests joining in too (I mainly just ignored them all though. Beckii Cruel was the only one I was a fan of) and there was a live Samurai demonstration with some guys showing techniques on rolled-up tatami mats.
The Miku concert was mind-blowing though. Definitely the best part of it~ The live band really helps create the atmosphere. Luka’s ‘Just Be Friends’ was the best song that played in my opinion, however the girl shouting “I love you!” to Len probably disagrees with me XD

After I left, it took a while to get used to not seeing everyone in cosplay.

heh, you may as well have called the con I went to “Sword Art Conline”… get it? get it? … I know, that was terrible… seriously though, I counted more than a hundred people cosplaying Kirito.

That’s generally how Anime conventions are

At the moment it’s all Attack on Titan and SAO.

Oh god… There was a fleet of people in those horrible brown costumes from SnK at the Con I mentioned.
Pretty sure they won the cosplay contest too.

There was a whole crowd of SnK folk at this thing. The anime cosplayers were them, a Miku and a Luka, a Trigun guy, a Bleach guy and some Naruto people. Oh, and a Homura.

The Homura, Miku and Luka were cool.

Hello. I met Misuzu and Minagi at Hajisai Festival at Washimiya Shrine, Saitama. There are my (our?) Goddesses. 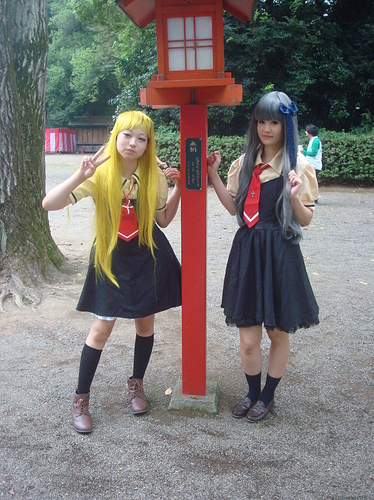 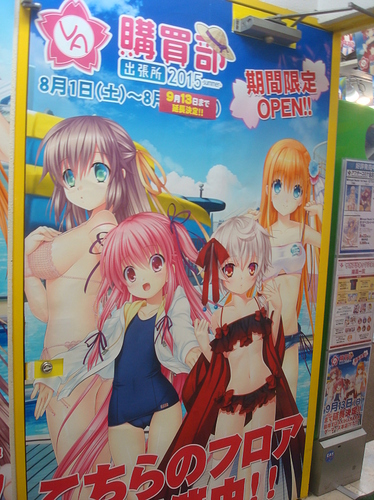 I attend Sakura Con every year as its the biggest convention in my area. I usually attend for the entire weekend along with some friends and I sometimes even cosplay there. While stuff changes from year to year, I can usually find a fair amount of key stuff. One year, I believe it was either 2012 or 2013, I managed to snag the cat Nagisa and dog Fuko prize figures, a nice 1/6 scale Komari figure, an extreme high quality Kotori prize figure and nearly the entire Toywork’s Key memorial trading figure set for a pretty good price at the vendor’s hall. I’ve also come across a fair amount of Key cosplayers as well, including a very sweet couple who were cosplaying as Kud and Riki one year as well as a nice women I met who was cosplaying as Nagisa and carrying around a massive dango plushie with her. Overall, going there is always a really fun experience and you can really meet some interesting people.

I was enough of a lucky/unlucky soul that I got to see that commercial when it was airing on TV. Somehow it was even more cringe worthy back then.