Ok so I’m making me one of them Pokémon hacks of Emerald, it started off as just a little ‘swap the gym leaders for the Little Busters’ but then my…sense…of game design kicked in so I made it balls hard 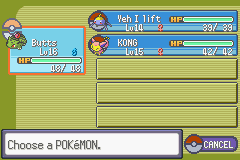 Using Pokémon not normally in Hoenn, almost all Pokémon are added to the main game, as well as formerly unusably bad Pokémon buffed to be viable! Such as Masquirain and Delcatty. Taking suggestions on Pokémon to buff 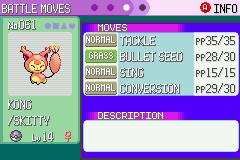 Weird and unusual buffs at that!(It also has Trace) 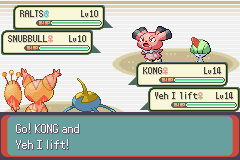 Completely new Gyms, seen here, the first Gym, now a Fairy Type, which is half implanted. 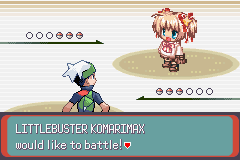 Most major opponents have been replaced with a Little Busters Character, such as the first gym leader Komari here, who uses Fairy Types Will be redoing the sprites in Pokémon sprites because not everyone has a good baseball sprite 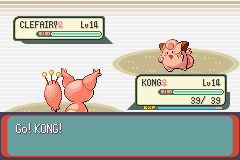 Their levels are buffed! 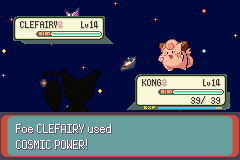 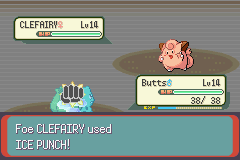 I buffed them too much. 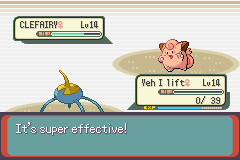 Oh yeah Water is weak to Ice now. Among other changes that mostly revolve around buffing Bug and Ice. 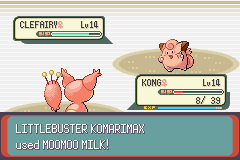 Yeah ok I know I was going for difficult but I think I might have gone too far. This Clefairy was toned down somewhat after thoroughly destroying Kanon, although it’s still harder than Roxanne’s entire team

Gym 2 Kud: Dark Type(Dark has the most Doge Pokémon)

Gym 3: Sasami: Poison Type(Honestly it’s because most other types were taken, also Purple and Poison match)

Gym 4: Haruka: Electric Type(Energetic and shit, also I wanted her type to have an interaction with Kanata’s)

Rival: A-chan: Dragon Type(Absolutely no reason other than filling types)

Wally: Suginami: Bug Type(Well she is pretty small and insignificant to the big picture)

Absolutely no one: Rock Type(Isn’t it sad?)

All Pokémon that used to evolve by trade now evolve at level 35.
Exceptions are Seadra and Scyther at level 45, Slowpoke into Slowking with a Water Stone, and Clamperl into Huntail with a Thunder Stone
Eevee evolves into Espeon with Happiness reguardless of time of day. Evolves into Umbreon with Moon Stone

Fairy Type half added, all resistances, but no offensive moves because that’s out of my ability.
Changes to type chart that I’ve forgotten, some things that come to mind are Ice Resisting Dragon and being super effective on Water.

Water is weak to Ice now.

YEEEEESS! I always use Ice attacks on water Pokemon and then realize it’s not super effective ;~;
The changes all sound amazing. It sounds like every Pokemon is available?
Buffing Delcatty, yay~ I always liked the design of the Skitty family, but (outside of Pokemon Ranger) they were pretty useless.

The changes all sound amazing. It sounds like every Pokemon is available?

Unless I missed anything, basically.
Smeargle and Sudowoodo arn’t until the Battle Frontier where they always were before because I’m too lazy to bother moving them.
The Cover Legendaries and Mewtwo arn’t available because screw the player.
And Unown isn’t available because it’s alternate forms are…a useful resource…

I’ve finally hit a certain point and can reveal the new version mascot of Emerald Busters, I’ve had this idea since the start, so it’s kind of funny that it ended up getting implanted on DorjDay. 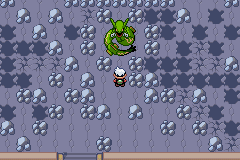 Usually when you get here in Emerald, you fight Rayquaza 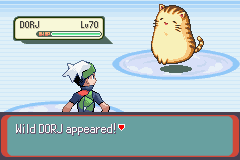 However instead of Rayquaza, in Emerald Busters you’ll encounter this! I’llseeifIcanmakehimnotfloatinglater 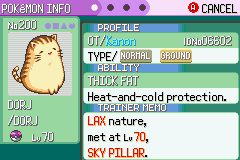 He is entirely his own Pokémon, not just a reskin of Rayquaza. 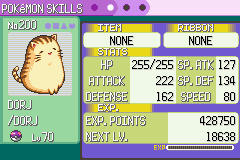 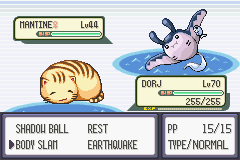 He even has a backsprite. He also has an animation on his front sprite which I couldn’t capture because it’s too fast, and there is even a shiny Dorj if you’re stupid lucky!

What about Little Monsters: Dorj? (RitoMon for short)

fast, and there is even a shiny Dorj if you’re stupid lucky!

The shiny Dorj reminds me a lot of Pusheen.

You know literally all I need to do is like three sprites and it’s been that way for like a year.

I mean I also wanted to do another beta test playthough but the game is too hard and it takes too long to do that.

I would be down for play testing on emulator maybe. actually idk. but it might be fun

this could easily be my favorite thing

I also have no idea how to patch.

You want me to release a rom on Kaza?

Pretty sure you just need something like Lunar IPS http://www.romhacking.net/utilities/240/
It takes the original ROM, and the modified one, and creates a patch from that. You can then use the same tool to apply it.
I thiiink it works on most things.

this looks amazing, did you finally finish this? are you planing to release the rom soon? i’d love to play it :fukowa: