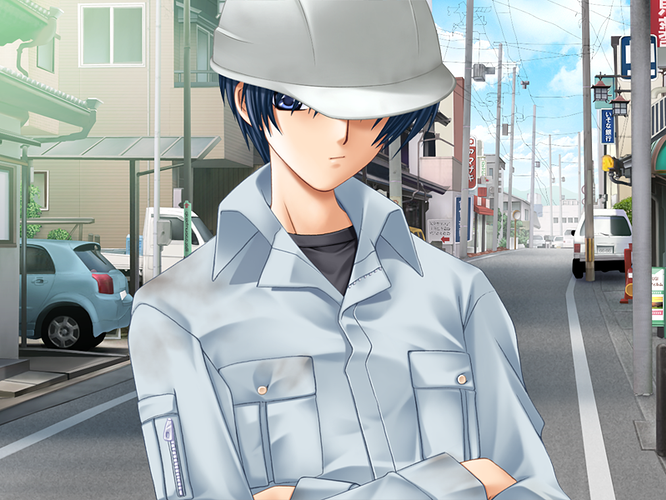 Discussion of Yusuke’s character in Clannad.
This discussion will contain information from all of the Clannad Visual Novel including After Story. If you have yet to complete After Story, you should refrain from reading this topic.Feel free to talk about all of Clannad without spoiler tagging, but if you want to draw comparisons to other visual novels, please use spoiler tags.

I freaking love this guy. In many ways I see a lot of myself in him. A bit like an older, more stoic version of Kyousuke. (Which is fitting since they both share the same voice actor). I’m sure many people would find his ramblings annoying, but his passion ignites a genuine appreciation in me. I wanna be this guy when I’m older. Yusuke, our legendary MC. Never lose your love!

What do you think of Yusuke? Like him? Hate him? Are you able to laugh freely?

His birthday is the 5th of December.

Yusuke is a man who’s passionate 24/7.
When you don’t know what to do, when you’ve lost your way, when you’re doubting yourself or even when you’re just hesitating to take action, Yusuke-san is the guy you need by your side. He’ll give you courage, infect you with his passion and show you the way. He’s a man you can look up to… in those kinds of sitiuations at least.
Because the thing is, Yuusuke is good at being epic. He’ll be epic just by showing up in the right place at the right time. But since he’s passionate 'round the clock, in normal situations, his speeches just look silly and ridiculous. But that’s not even a bad thing or wasted effort. After all, having a good laugh once in a while is good for your health ^^
In that regard, he’s quite similar to a certain other Yoshino in a certain other Key work.

Among all of his appearances throughout Clannad, the one I found most memorable was the one in the Hiiragi Kappei route (The rest of this paragraph will be about that route). That’s where Yoshino Yusuke was literally a life-saver. Yusuke’s advice was the key (see what I did there?) to restoring Kappei’s will to live on, thus saving both him and Ryou. Just by giving some passionate advice!
Now, this is how it happened, just to refresh your memory: Tomoya and Ryou were sitting on a park bench, crying. They were a mess and they felt absolutely helpless. This is when Yusuke-san showed up. “If you’re fine with telling me, I’ll listen.” This was his conclusion: “Your power is needed,” he said to Ryou. His instructions were cryptic, but Ryou understood them. He then left, answering her last question with “In reality, if there’s love… there’s also lies.”
So basically, he saved a young couple by having them make use of the power of love. And he didn’t even take any credit for it. “If there’s anything to thank, it’s her power. …it’s called love.”

You could say that Yuusuke is like a missionary on a quest to convey the power of love to the people around him, be it with words or music.

Okay joking aside, Yoshino will forever be memorable for me because you needed to meet him in the first place to get the good end in Kappei route. Really one of the most frustrating choices in the VN

I’d say he closer compares to a certain Kyousuke of a certain other Key work.

Yoshino is probably the biggest role model from Clannad. Similar to Kyousuke, he just gives off an incredibly “cool” affect. He’s extremely trustworthy and humble, and is passionate in everything he does. He desires to help people in the best way possible, even (maybe especially) if its through a truth that hurts.

Several of the routes hinge on his advice, and more importantly his friendship, and I think its safe to say that many of them wouldnt have made it through without him.

Started watching the anime again with @Bonecuss and I cannot get over how Kyousuke he is. He is literally alternate-universe Kyousuke, not just the EXACTLY THE SAME VOICE (same VA yeh whatevs) but his character is that overly-inspirational cool guy. A bit less based and slightly more insane but still top tier, premium waifu material.

A post was merged into an existing topic: CLANNAD Quotes & Screenshots

Ah, Yoshino. I really love this guy, and it’s not just because he’s voiced by Hikaru Midorikawa. He seems like the kind of guy Midorikawa would voice, acting all cool and collected when inside he’s rather emotionally burdened. Yoshino certainly fits the bill, and he’s not afraid to be goofy about it either, like he would later do as Kyousuke in Little Busters. He’s easily one of my favorite side characters in CLANNAD, here and from what I remember of the anime.

Yoshino’s dilemma feels rather personal, and yet at the same time rather distant. He talks of his past in the third person and seems to not want anything to do with his past self. It hurts him enough that he used to be a true delinquent and attention-seeker, it was when he got the attention he sought that he started to crumble. Yoshino’s story is very grim, almost hopeless. But his one light, Kouko Ibuki, was what kept him going in the end. In this sense, his story draws an interesting parallel with that of TomoyaDango and his relationship with Nagisa. It’s sweet and heartwarming watching Yoshino return to what he wanted to do with their help.

Interestingly, I speculate that Yoshino’s story is also very personal to Maeda. I’ve seen glimmers of his relationship with music in his other works (Angel Beats, Charlotte, Hikikomori no Uta, etc.), but here it feels like, if not Maeda himself, someone very close to Maeda inspired this story. Perhaps Maeda had a teacher or idol that he looked up to (if not befriended), and wrote this route and Yoshino’s character based around him/her/it/whatever. Whatever the case, this story just feels really personal to me.

Looks like I have…nine lights now? After Story is getting really interesting so far, and I look forward to seeing how Dango will handle the troubles of the next person in line for a light…

Actually, I can really see a lot of Maeda in Yoshino’s story. Maeda has spoken a few times about he doesn’t write stories for himself; he writes them to please his fans. It’s a bit of a sad realisation, but I often feel like Maeda is burdened by the amount of people who’ve spoken out loud about how his stories have changed their lives in some way, so much that it’s shackled him to continue writing for those fans to meet their expectations.

Let that say nothing of the quality of his work. But sometimes I wish Maeda didn’t care about his fans as much as he does

PS. I’m still skeptical Hikikomori no Uta is meant to be Maeda. If anything, it cements this idea that Maeda is writing for the fans; in this case he wanted to write a song for all the Hikikomoris out there who love his work.

I speculate that Yoshino’s story is also very personal to Maeda. I’ve seen glimmers of his relationship with music in his other works (Angel Beats, Charlotte, Hikikomori no Uta, etc.)

The link to Angel Beats! in particular I think deserves elaboration, as it’s a big part of why Yusuke is my favourite supporting character in Clannad.
Yusuke and Masami use eerily similar language when describing the intent behind their music, and how it affected both of their lives: “I wanted to call out to the lost and lonely”/“His vocals seemed to call out to me–to the lost and lonely”; “I wanted to save them through my music”/“just as I was saved, I want to go save somebody else,” and so on (pity we don’t actually have any of Yusuke’s lyrics, so we can’t make a comparison there). I even speculated at one point that Sad Machine may have been (in-universe) directly inspired by Yoshino. Something like this: Yoshino inspires Sad Machine; Sad Machine in turn inspires Masami (and possibly also Zhiend, from what little I know of Charlotte); Masami inspires Yui (and the guy from the Last Song comic, possibly)…
This passing of the torch could go on forever, with a theoretically infinite number of aspiring musicians spurred on to success by the work of those who came before. Somehow, I really love that idea. A group of bards and balladeers, passing their profession down the line, like a suitcase found on a beach, through countless hands, ensuring that music will always provide an escape for those who need one.

Yoshino. Where do I even begin. My profile pic says it all. I freaking love this guy. I have been a musician for almost a decade in numerous ways. His story about making music to please other people really hit home with me. His story about how he was laughed at for his goals is something I can directly relate to. I want to, one day, make a living off music, in some form, and that’s a daunting task to embark on, one I have been working towards for many years. I mainly play drums, but write lyrics as well, and I’m working on getting a music degree. Should you make music you truly want, or should you make music that you know people will like, but what you truly don’t want to make? When does caring about your fans go too far and limit your creative ability, much less your sanity? I can tell Maeda is a musician just by reading through this in the VN. Some deep topics I can relate to on a small scale.
Also, his melodramatic rants are awesome. I’m pretty melodramatic myself, so I can relate to him on that level. I’m that guy when I’m in a conversation to say something super deep out of nowhere that makes the moment a tad weird. But, if you put the right rant at the right time, magic happens.