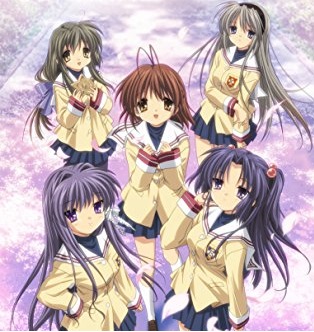 General discussion topic for the the Clannad Anime.

Quite a few fans have been introduced to Key by the Clannad Anime and usually being touched by it a lot. Until now, it did not have it’s own discussion topic, unlike other Key works. A bit of discussion already happened in CLANNAD - General Discussion, but this is a more dedicated space for the anime.

So, how did you like the adaptation? What about the voice acting in either language? Who of you were introduced to Key by this?

You can talk about the content of both volumes/seasons and the OVAs.

Use spoilertags at your own descretion for arc spoilers. Tag any content of the after story arc. Provide adequate context in parenthesis for the [spoiler] tags.

I personally was introduced to the Clannad Anime by a friend’s friend who recommended it very much.
As such, I got what I got and it was the first one in a while to really get me emotional.
At that point, I had heard of Key, but never read any of the novels. I did read a VN before, but never such a big one. To this date, the anime is the only way I experienced Clannad in, however, I own it on Steam, so I am gonna get there some day.

As such, I cannot really compare the VN and the anime - only knowing one half of the picture… I really hope some of you are interested in talking more about it.

I just wanted to re-post this link to a mostly spoiler free review, which was written early in 2018.

My first experience was the VN but I bought and watched the anime quite soon afterwards and I was really pleased that it upheld my high opinion of the work, some parts enhanced by animation and most of the changes or omissions are not too critical.

The one drawback is that it is harder for a viewer who has not played the VN to realise the full significance of the light orbs in the resolution of the story - although saying that there are plenty of clues there for those who pay close attention. Nonetheless as the review says it can be a bit divisive. For the most part though the most emotional scenes retain their impact and I really felt the heartbreak of moments such as {major spoilers for Clannad and After Story} Kotomi’s breakdown and Nagisa’s death and the emotional high of {After Story spoiler}

Ushio’s sunflower field scene even more in the anime.

In general turning the multiple routes into a linear story was successful, the 4 OVAs/Extras are not really essential viewing as far as the main story arc is concerned and probably the weakest parts. It has some flaws and curious creative choices, e.g. the way it adapts Tomoyo’s route, for sure but nothing too major. Pacing can be a little uneven and feel slow at times, but the comedy moments are generally well played out.

For anyone who can’t spare the time to play through 100 hours or of the VN the anime does offer a pretty good alternative and even if you’ve seen the VN it really is worth considering the anime box sets too.