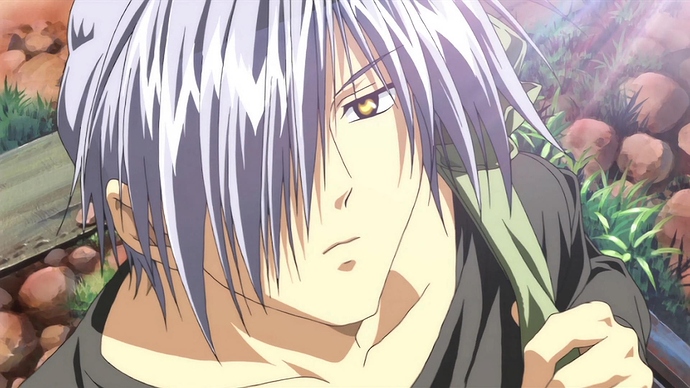 Since people are slowly delving into the AIR VN, I think it’s time we talk about the best character of the bunch! Yukito!

Feel free to discuss anything from the AIR VN and any of the AIR adaptions, but please tag references to any major plot points with [spoiler] tags.

In the “Which Key Protag is the biggest douchebag?” thread, Yukito was a (fairly strong) contender. The guy may be a bit awkward when it comes to social etiquette, but considering he is a child with no living family, who wanders aimlessly looking for enough money to live, the guy has an amazing outlook on life.

Both the Movie and the VN Yukito are great. His quotes about the true meaning of the word “journey,” or any of his meaningful conversations with Haruko or Hijiri are wonderful to listen to. He may think of himself as but another member of the audience, but he clearly cares about the people he gets involved with more than he cares for himself.

The Air Anime didn’t leave much of a lasting impression on me, so I can’t really comment much. But from what I’m hearing about the Air VN, I’m getting pretty eager to give it a try. Yukito sounds like a very interesting character. Also, any excuse to hear more of Midorikawa’s soothing voice

I just realized that I gave Tabuchi the wrong name when making this thread. Sorry everyone. I don’t know where I got Yukito from… I must have been tired.

Also, any excuse to hear more of Midorikawa’s soothing voice

I think it’s mostly due to his “traveler” identity that Yukito seems so disconnected from the rest of the cast and uninterested in them. It makes him look like a bit of a douche, but logically speaking, he’s a traveler who might leave the next day. It makes perfect sense for him not to get deeply involved with everyone and poke his nose into their business. It would be irresponsible to do so and then just up and leave. He’s an outsider, thus a mere observer.
I think that’s how the bad ending in the common route happens: If Yukito doesn’t decide to get deeply involved with someone, to the point of wanting to be play a role in their lives, he’ll just leave. It doesn’t mean he doesn’t care at all. Just that he won’t butt in half-assedly.

On a different note, it does surprise me how brazen a prankster Yukito is. He feels WAY too at home in the Kamio family house.

“You’re quiet with a cool attitude, but you’re always doing childish things.” Misuzu did well to notice that discrepancy between how Yukito wants to look and how he actually looks to people around him. That, and his hidden muscles.

So, do you think he wants to look cool or carefree?

I don’t think he wants either. I can’t see him caring about appearances to the point where he purposely changes his behavior.

Yukito is just aware of social boundaries. When a stranger starts talking to him, he questions it. When an unknown family has problems, he knows not to butt in.
Part of him cares about what’s going on with other people, but he has to take care of himself as well. If that’s what you classify as cool, then sure, but really he’s just acting how most people would.

He might seem carefree, but that’s just because he isn’t in a dramatic situation currently. He’s just a normal guy. He’s wary when he needs to be, but he’ll usually just try and have fun.

Okay, final thoughts on Yukito’s character. This dude is amazing, and stole the show for me for the majority of the VN he was present in. He has an amazing comedic presence in the early portion of the game, seamlessly switching roles from the witty straight guy to the eccentric weirdo when the situation calls for it, which also grants a lot of insight into the kind of person Yukito is. All the laughs aside, Yukito is very much a thinker, having had all that time to himself to think about the world and his place in it. He’s continuing a journey he doesn’t understand in the hopes that he will find meaning in his existence someday, but that meaning doesn’t necessarily rest solely with saving the girl in the sky. He can find meaning in a simple existence with Kano or Misuzu as well, as indicated by the different endings, and I think it’s important to remember that that is okay.

Ultimately though, the true ending we’re lead to is one in which Yukito must sacrifice himself to save Misuzu. As a Yukito fan, this is a massive blow, as we don’t get to see any new Yukito moments in Summer or AIR, but the story must go on. What did he accomplish in the end by putting himself into the doll? Maybe it had something to do with his rebirth into the body of Sora, or it might be completely unrelated. Maybe it was just, all he could do to help Misuzu stave off the curse a little longer to reach the end of her dream and overcome the curse for future girls in the line. We know that when he disappears, Misuzu awakens from her seemingly eternal sleep, and again he manages to help her as his spirit is summoned through the power of the doll, even if he cannot be there in person anymore. I don’t think this is much different from death for Yukito, but at least together with Misuzu, their sacrifices were able to accomplish something; ending the curse and saving Kanna, as seen by the final scene with the two children on the beach.

So yeah, that sucks, but Yukito is still one of the best Key protagonists ever. He’s funny, witty, and deep. I love getting lost in his head throughout the majority of the VN.