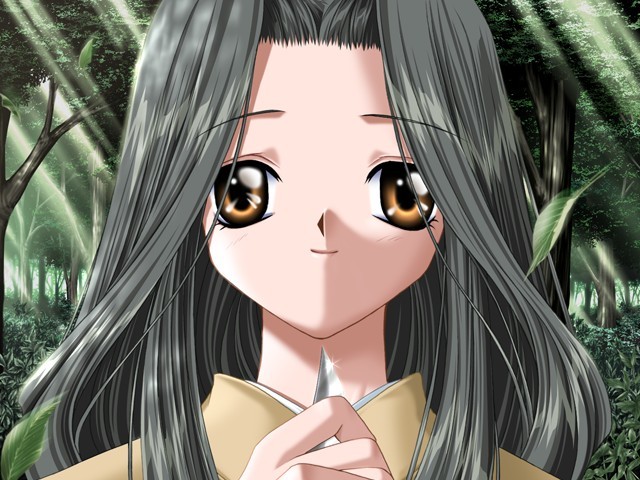 Discussion topic for Uraha’s character in AIR. Feel free to discuss anything from the Summer route and Dream arc, but mark any references to the AIR route with the [spoiler] tag.

Uraha is a fantastic character. At first she comes across as mischevious bit a bit clueless, but it quickly becomes apparent that she’s a lot more mature, strong and wise than appearances would have you believe. She is the backbone of the Summer trio. Without her meddling, it’s doubtful that Ryuuya would have ever come to bond with Kanna and Uraha, and their journey may never have happened. But throughout the entire journey she continues to act not only as a maternal figure for the group, but a source of hope and strength for them all. She helps them acquire information to lead them to their destination, breaks through the barrier surrounding the mountain, and then at the final moment when Kanna sacrifices herself to save them, Uraha understands what needs to be done and takes Ryuuya with her to live on. At first she insists that she won’t be able to live on without Ryuuya, but in the end Ryuuya does die, and Uraha gains the strength needed to continue living despite that fact. She is one of the strongest characters in the series, you’ve really gotta admire her.

Uraha is a quirky character. She likes Kanna and Ryuuya. Her crazy plan saved them and their future generations from despair. 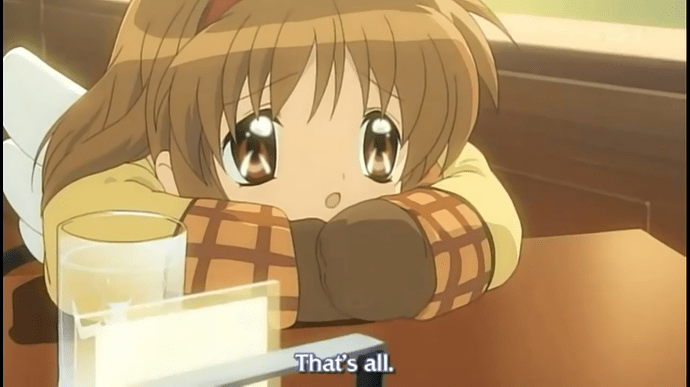 What I really like about Uraha is that, unlike the other people at the shrine, she has no qualms over interacting with Kanna. In fact, she is just absolutely smitten over her~ Whereas, generally, all the other workers have a negative view over the winged creatures in general, Uraha doesn’t let that stop her from getting close tto Kanna.

Now then, that aside…

I’ve said this crazy theory during the Summer route podcast; go listen to it to it if you haven’t; but I see a distinct connection between Uraha and Minagi.

To summarize the theory that I said during the podcast, it goes something like this: We know that the goal of the people in obliterating the winged beings was to remove all form of reverence towards them. This included not just killing them off, but removing all documents that praise or revere the winged beings as god-like beings.

However, there was one person in the modern day and age that still revered the winged beings: Minagi’s father. He had the painting of a winged girl which he called “God”. Now why would he call her that, instead of an angel?

In comes my theory: I theorize that, somewhere down the line of Uraha’s and Ryuuya’s bloodline, it split. I wouldn’t be surprised if one of their descendants had two, maybe even more children. Whereas one bloodline continued in their mission (Yukito), perhaps the other bloodline preserved the reverence for the winged beings. The only other possibility I can think of is if he is a descendant of the monks who helped Uraha, since they also revered the winged beings.

However, one scene struck me really hard. In Minagi’s bad end, we hear her pleading to Yukito for him to rest his head on her lap (in japanese: hizamakura). Similarly, in the ending of Summer, the very last thing that Uraha has Ryuuya do is have him lay his head on her lap, so he can hear their child. This is a bit of a stretch, but it really hammered the thought into my brain that Minagi is a descendant of Ryuuya and Uraha. And, much like how Yukito is similar to Ryuuya, Minagi is similar to Uraha. Thus the trio of Minagi-Michiru-Yukito feel a lot more like Kanna-Uraha-Yukito.

There are a lot more similarities. Like how they are both very stealthy, or how they fawn heavily over their adored object (minagi to michiru and uraha to kanna). A japanese blog I read even points out how their H-scenes are similar, heh.

Uraha is one of my favorites from AIR hands down. She such a cool character, even taking it only at the surface she is this fun loving character who isn’t afraid to go outside the norms. As has been said her strength is the cord that bond the trio and held them all together.

In AIR most of the romance is downplayed a lot in favor of the characters storylines, this holds true in AIR but we get what is in my opinion one of the coolest romances in Summer. The better majority of the route all we see is Ryuuya and Kanna pushed on us, and Uraha even encourages it with that weird h-scene esk thing at the river that she set up. But once Kanna has left Uraha reveals that she has had the same feeling for Ryuuya that Kanna has, but she was willing to put her own feelings on the back burner in order to support her two friends. Uraha shows that she is loyal to a fault many times, and this is just further proof of her loyalty to others.

We also can see her strength of character at the end of Summer and beyond. As Summer is winding down we see Ryuuya is in a physical state where he is unable to do much which leaves Uraha to not only attend to her training in Hojutsu, but also to care for Ryuuya and attend to his needs. Even after the route has ended if you think about what she faced as Ryuuya died, she became a single mother who had lost the two most important people in her life in a very short amount of time. She proceeded to raise her child, and teach him/her houjutsu, and pass on her goal in life.

All of this plus the obvious fun character traits she displays makes Uraha easily one of my favorite characters in AIR.

This is a bit of a stretch, but it really hammered the thought into my brain that Minagi is a descendant of Ryuuya and Uraha.

How can you be a supporter of both the Minagi route (and Minagi) and of this theory at the same time? Because you are suggesting that Yukito and Minagi are related and that would make a romantic relationship kinda weird. Just sayin XP

Yes I am suggesting that they are related, but for all we know, that relation could have been numerous generations ago. I think their shared blood is already negligible at that point for it to be considered incestuous

That aside, Uraha was my favorite, and is probably, my favorite character in the VN (I haven’t read AIR yet though so idk if that’ll change). I feel like if she weren’t there, I wouldn’t have enjoyed Summer at all. Her being the ancestor of Yukito was a nice twist.

Also, Pepe, what if that scene in Minagi’s bad end is actually because Minagi is…pregnant. Bam, no incest needed.

Also, Pepe, what if that scene in Minagi’s bad end is actually because Minagi is…pregnant. Bam, no incest needed.

Having played only the memorial edition, I don’t quite know where the H-scene fits in and if it is something that happens before her pleading for hizamakura

Oh, well, yeah. It happens. But that’s another discussion~