Having seen the Summer arc first through the anime, that felt at first like a really jarring shift in the story but I did come to appreciate it a lot and with the OVAs concentrating on the fun parts it was very enjoyable. So, armed with that I went into the VN Summer arc with much anticipation - and it did not disappoint.

We have three new characters who are thrust upon us, taking us out of the contemporary story and into the pre Shogun age. I’ve never been much into Samurai tales so it pleased me very much that what had was strongly character based and seeing the trio develop the bonds and camaraderie while dealing with the dangers and in Kanna’s case simply a world away from all she knew was riveting. Kanna also being our eyes into this world is the butt (ahem!) of some very funny ribbing but nonetheless we gain a true sense of the injustice of her, well, “Protective Custody” and persecution of the Winged People; that building of empathy helps to make her ultimate sacrifice much more poignant. Each of the trio has a crucial role to play.

BUT - how does it all tie in with the Dream arc? It’s all - well mostly all - explained in a way that has been hinted at even if it leaves some questions as per previous posts. I can very much enjoy this arc as an entity in its own right. The near H-scene and actual H-scene felt intrusive ( maybe it lost something in translation) but still 5/5 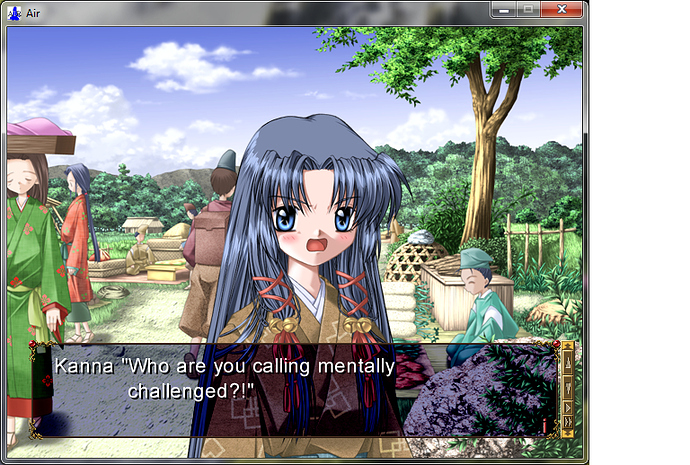 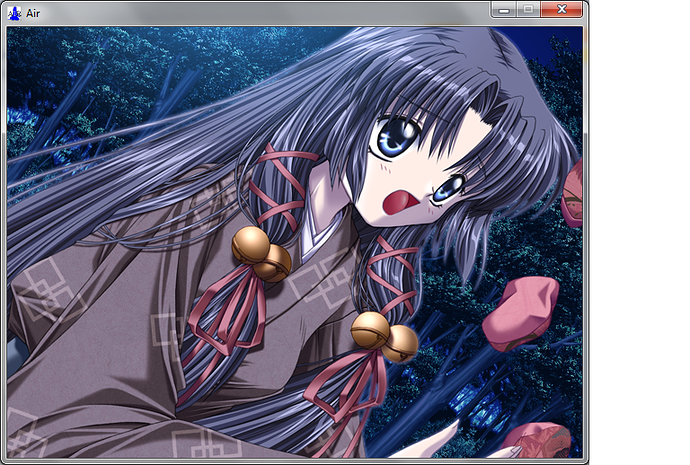 Having recently finished rereading Air, I have realized just how much I like it because of Summer. Yuuichi Suzumoto, the genius behind this and Planetarian, weaves a beautiful tale of what it means to be a family, spearheading into main theme of Air only touched upon in the Dream arcs.

Here, Kanna and Ryuuya are established as purposeless beings who follow orders given to them because that’s all they’ve been taught to do. Uraha, already being a developed character, provides the depth needed from her role as the guidepost for the group dynamic to form. The ice is broken very concisely yet naturally, which Suzumoto is best at doing, and the group decides to find Kanna’s mother. I enjoy this because while there is something for the trio to react to, that is their proactive choice. I love it when characters’ motives are something they would have independent of the plot happening, and it’s accomplished here well.

Through the rest of Summer, the relationship between the three is developed through their actions, far more than their words. The characters and their relationship is the strength of the story, shown in examples like Uraha saying “It’s almost like…” to which Ryuuya has a funny quip, until the end where he reassures the theme by saying they’re a happy family. It reminds me a lot of the character writing of Kinoko Nasu, and it’s something I very much appreciate. Less words, more action. Sounds like a strange thing to want from visual novels, but when it’s done it’s done well.

Summer is so simple, and because of that it is beautiful. Perfection is achieved not when you can no longer add, but when you can no longer take away, as said by Antoine de Saint-Exupery; a philosophy I wholly agree with, and what Suzumoto does best. What we’re left with in the end, is a simple tale of the importance of family, and how families can made of anyone regardless of blood connection. I think Summer is objectively the best story I’ve read, held back only by being a part of Air, which I find hard to fault it for anyway.

This is the route where I am probably going to make some enemies here. This is my least favorite route. Please don’t hurt me. I just found it to be really, really boring. I LOVED Kanna, though. Her naivete was incredibly endearing and I looked forward to most scenes with her in it. But I couldn’t be asked to care about Ryuuya and Uraha one bit. And the actual events didn’t really match the type of pacing I like. I enjoy what it did to tie her story into the story of the curse. I like what it did for the visual novel as a whole, but Summer really just bored me.

I really do not have a lot of constructive things to say regarding it. It just, personally, had me asleep at the wheel.

I like to think that, at its core, Air is a story about a group of people coming together and forming a family. Nowhere is that more clear than in summer and nowhere does it hurt more than summer. Summer is a story about its characters for the first time being accepting by each other as they are and slowly becoming more of a family together. Finally, you see this family torn apart by Kanna’s death, but Ryuuya and Uraha don’t give up. They continue in an attempt to save Kanna from her overwhelming despair. Seeing Kanna fail to juggle while her dying mom watches might as well be the saddest key scene behind a select few. Each of these characters are so lovable but you see them face so much despair. Its moves me that Ryuuya didn’t run in and die trying to pointlessly avenge Kanna, but because of Uraha was able to live on and created a lineage whose goal was to save her. I’m probably just rambling at this time so I’ll just say one more time that I love Summer. I may not be able to fully articulate my opinions, but I can say that.

Also Kanna is way too cute. Uraha and Ryuuya are also great