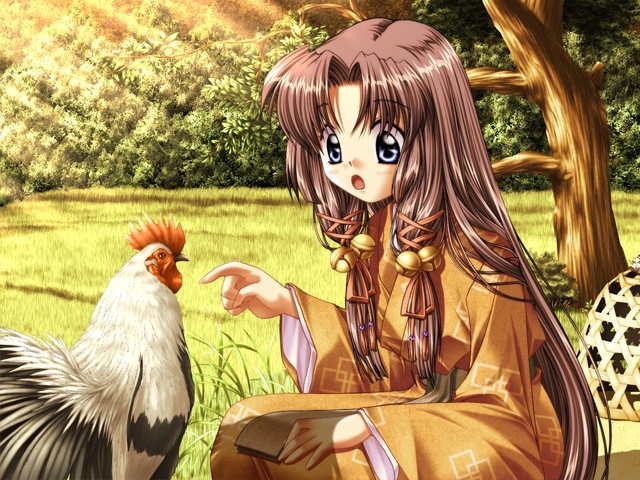 Discussion thread for the Summer arc of AIR! Anything that takes place during Summer arc of the Visual Novel and Anime may be discussed freely. You may also mention any of the events in the Dream arc, since that is a prerequisite of Summer. However, all information pertaining to the AIR arc and outside works must be kept in spoiler tags!

This topic also hosted AIR Bookclub discussion, and was referenced in our Summer Route Podcast.

What would you rate this arc?

Summer is a huge perspective shift from Dream, and it kind of threw me off as to what was going on initially. Even the music’s different (although, thankfully, just as good as the stuff in Dream). Thankfully, it becomes easier to understand as the story progresses, and I’ve been able to quickly relate to the characters. I’m not really going to go into too much detail on the characters, since that’s what the character threads are for, so I’ll just mainly focus on the story.

Anyway, the story mainly centers around three characters: Ryuuya, a samurai assigned to protect one of the last ‘winged ones’ in existence; Kanna, the winged one in question who desires to find her mother; and Uraha, Kanna’s loving maidservant and, as we see later, an ancestor of Yukito. These three depend on each other in order to reach their goals, despite the circumstances that lay before them.

This is probably the most confusing route in AIR, mainly because it becomes a tad hard to understand the ancient Japanese culture that ties in to all this and because of the complex interpersonal relationships between the three main characters. There are a lot of Buddhist and pagan references in this one and not as many Christian references, probably because this was set during a time when Christianity had not reached Japan yet. The idea of reincarnation is touched upon, and pagan magic is used to explain Houjutsu.

Learning more about the winged ones in this route, we find out three things: Kanna is the girl in the sky Yukito is looking for, which means that Misuzu is her reincarnation in a way; the reason Kanna is stuck in the sky is because a strong curse was placed upon her, which kind of kills her and kind of puts her in an eternal nightmare (it’s too complicated for me to even explain at the moment); and finally, the only way to save her is through a rough, half-baked plan that requires passing down Houjutsu from one generation to the next until someone, anyone, finds Kanna’s reincarnation and ‘saves’ her.

The romance in this route is all over the place. It’s definitely focused on Ryuuya and Kanna, but unfortunately Kanna ‘dies’ near the end of the route, so Ryuuya has to get together with the closest girl. Okay, that’s fine, but unfortunately even Kanna’s romance feels a tad forced, especially when she goes full on nude. XP

On to the Key Points:

Throughout the novel, we hear about the ‘winged ones’ being cursed beings, demons even. They bring about sickness, war and sorrow, yet somehow Kanna is different. Is this really their fault, or are humans really the people that make them that way?

It seems to me that Houjutsu weakens after several centuries of being passed down. Why is this? Is it because some of the later generations never got the chance to learn anything or refused to learn anything, or does it deliberately weaken since very few people can fully master Houjutsu like Uraha? Could this be symbolic of the decline of paganism in Japan and the rise of Christianity and other religions?

Now that the 1000th Summer has passed, it’s time to see if everything these characters have done paid off… 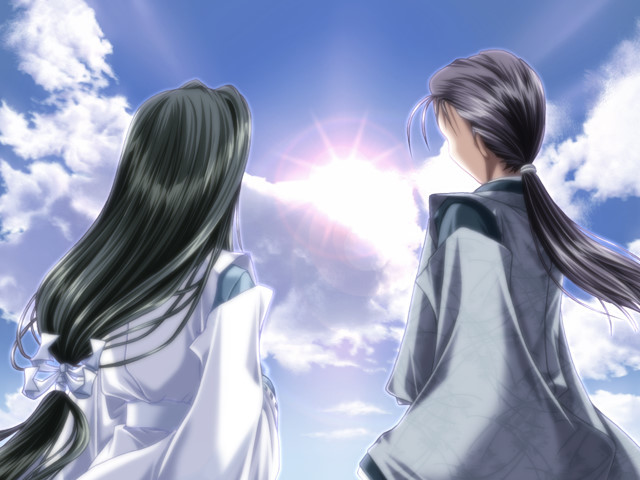 I’ve just started playing Summer route today and it is super engaging. So much stuff is happening already, and it’s keeping me interested. I’ve gotta say this is, so far, the most enjoyable part of the game. Of course I’m only barely in, so I still have a lot more text to go

Wow that route was really good. I really got to like all of the characters as the route went on. Although, I liked Ryuuya ever since he commented on Kanna’s butt.

I thought there would be some nice connections with the story told in Kano’s route, so I skipped through and read that bit again.
There’s some references to things that sound like they are winged ones.

It wasn’t even a battle.
A sound of thunder could be heard from the beach.
[…]
But one night,
A gale was blowing.
A fierce gale seldom seen in that season.
And when dawn broke, everything had changed.
Every last foreign ship in the harbour had sunk.
[…]
They said the Wind God had come down and destroyed all the ships.

Seems like a winged one could have destroyed the ships? With the references to the wind, like how Kanna and her mother have that power. There are mentions to wind in a few other places too.

Then it talks about someone coming asking about the shining feather.

He announced that anyone who touched the feather should step forward, as it was an unholy thing.

This is like as is described in Summer where they are trying to get rid of all the winged ones, calling them “demons”.

There is also the connection of the feather containing the memories, as it is described that winged ones can hold memories/dreams. It seems like even a single feather from a winged one was enough to capture Shiraho’s sad memories, and later curse Kano with them (Why did it curse her?).

What is the relevance, if any, of the spell imprisoning Kanna’s mother? (The mirror that ripples, and has to be returned to water by smashing it). Is this a popular magical thing in stories or something?

Hmmmmm. While I loved the route as a standalone thing, I feel like many aspects of the curse have been left unanswered. I have a few questions after reading.

“What I just saw must be something Kanna cared deeply about. A memory of us travelling together. A memory of me telling her about my saddest day. A memory of her kind, strong mother. Kanna flew off with all of those… Then ran out of strength.”

But that’s not what we saw. We saw Kanna clinging to Ryuuya’s dead body on the side of a road, crying out. This also contradicts what Uraha said about her being in the sky. Argh, I’m getting three conflicting images here. What’s going on??

“There will come a day when the curse sealing Kanna-sama in the sky wears down. Kanna-sama’s soul will then return to the Earth and transmigrate for eternity.”

This seems to contradict the idea that “She’s still in the sky, even now.” But considering that Misuzu’s dreams of the girl in the sky went BACK in time, perhaps it’s right to assume that the girl eventually left the sky and returned to the earth, reincarnating through different girls who inherit the curse, and the dream of the girl in the sky. This part is especially convoluted. It’s very abstract.

Also, are we meant to believe that the doll Yukito has is the same one Uraha made?

Also, are we meant to believe that the doll Yukito has is the same one Uraha made?

I believe so, it’s not impossible for a doll to just be maintained for hundreds of years.

I think there actually has been cases of things like that being found from history and actually not very damaged.
In this case however, there’s been a really specific inheriting of the doll with the mission for the girl in the sky, so I think that it’s definitely possible. Yukito’s doll is definitely described as not very pretty and old, which would be something to be expected looking back at dolls made 1000 years ago.

We saw Kanna clinging to Ryuuya’s dead body on the side of a road, crying out.

Huh? I didn’t recall that scene, when that happens?

When Uraha shows Ryuuya the vision of Kanna in the cave, that’s what he sees.
And I dunno, I feel like a ship of theseus dealio could be entirely possible here.

I thought that the vision Kanna sees is part of the curse, to torment her by making her see her loved one suffer.

Yes that’s right, but the lines spoken immediately after contradict what we see.

I’m afraid that I can’t make it clear enough. How I should describe it? Hmm…

Reread the scene. Ryuuya himself saw the vision through Uraha’s houjutsu. But what he describes doesn’t match what we, the viewer see.

Gonna put in my recorded daypoints here per chapter

Looots of stuff happening in this route, so it seems it’s gonna be longer…

what we, the viewer see.

Can you elaborate that?

What I get is that due to numerous curses Kanna’s soul becomes unable to reincarnate meanwhile she is being tormented by visions of Ryuuya dying. Eventually she will reincarnate but her soul is to much for a human vessel. So I guess Misuzu is the vessel for as big a part of Kanna’s souls as possible and the rest is “in the air” maybe. Then the curse from her mother is what causes her loved ones pain.

“What I just saw must be something Kanna cared deeply about. A memory of us travelling together. A memory of me telling her about my saddest day. A memory of her kind, strong mother. Kanna flew off with all of those… Then ran out of strength.”

Didn’t notice at first but this was worded weirdly. I’m gonna check the Japanese version.
Yeah there was not much different. The first line maybe should have been: “What I just saw must have been a fragment of something Kanna cared deeply about.”(俺が見たのはきっと、神奈が大切にしたかったもののかけらだ) I’m thinking they meant that it’s a memory corrupted by the curse.

Probably. But then we have

This isn’t what we saw at all. Did Ryuuya see more in that vision than was presented by the VN? He’s describing things he saw that we never saw. Also, Uraha describes the vision as “She’s in the air”, but we never see that either…

I think it’s supposed to read like this
“…What I just saw must be something Kanna cared deeply about.” [End Segment]

“A memory of us travelling together. A memory of me telling her about my saddest day. A memory of her kind, strong mother. Kanna flew off with all of those… Then ran out of strength.”[Retelling Kanna’s final moment]

I don’t see the problem there. It was just the first sentence that bothered me.