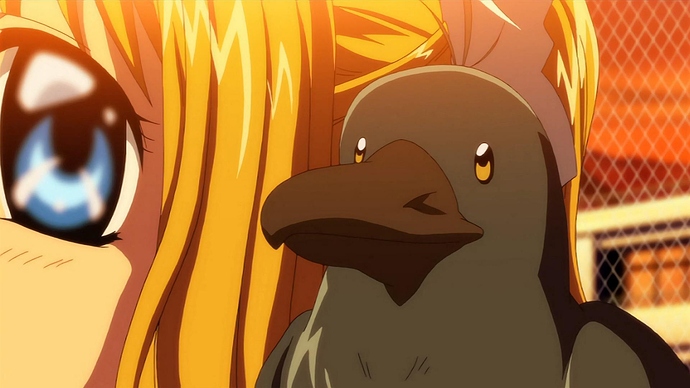 Discussion topic for Sora’s character in AIR. Feel free to discuss the entirety of AIR without use of [spoiler] tags. AIR Bookclub discussion begins with the first reply.

It’s a bit difficult to understand exactly who the focal character is in AIR. You wouldn’t exactly be wrong in saying that Sora is the main character, but Sora does next to nothing in AIR other than watch the events unfold. (Even he admits that. Several times.) I’m more inclined to believe that AIR is a shared story between Misuzu and Haruko, because both have their struggles and use Sora as sort of a medium to convey them.

Besides, we all know that Sora is Yukito, just without his amazing personality.

Here’s my Key Point concerning him:

Sora doesn’t know much about himself or the world he’s in initially, but he knows what a mother is. Why is this? Why does he say he doesn’t have a mother? Why does he refers to several objects and people as if they are in a mother-child relationship?

Come on, how hard is it to make a good CG of a crow? 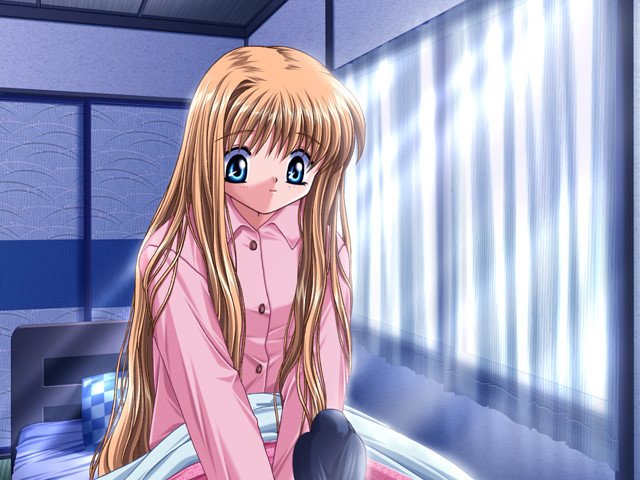 It says something about the quality of the characters in Air when one of the better ones is a bird.

I don’t really have much to say about Sora considering he doesn’t really do much aside from seeing the events unfold. To me, he’s basically the silent main character of an RPG except the only difference here is that you get to hear/view what’s really on his mind during the events and you get some backstory about Haruko and Misuzu’s motivations and what happens to them prior to Yukito’s arrival and after his departure . That doesn’t make him a bad character mind you but he was just there to witness the events.

Sora is a pretty interesting character, in one way or another. I guess we all know, eventually, that he is an incarnation of Yukito, even having his Houjutsu. However, because he is a crow, he can’t keep Yukito’s memories for a long while…

So one keypoint I wanna bring up is when Sora regains his memories for a split second. Firstly, Sora remembers a scene where he is Yukito, controlling the puppet, and Misuzu suddenly approaches him, and they hug each other. As we all know, this doesn’t happen; they do hug, but not in this manner. Why did Sora remember this scene, even though it didn’t really happen?. Another one is, well, Why did Misuzu suddenly see and embrace Yukito when Sora regained his memories? Did Sora really transform into Yukito for a short while, or was that all in Misuzu’s imagination? Or did Sora, as a bird, use his Houjutsu to project a fake Yukito?

I love the concept of Sora. Showing us a different side of the world and the characters through a bird who’s always listening, who people feel comfortable opening up to. Brilliant! The descriptions of the world through a bird’s eyes are very clever and creative, and are a very interesting way of getting certain ideas across. ie. the development of Sora’s perception of Haruko.

As a non-human character, there’s only so much characterisation you can give him. But his impact on the world should not be questioned. Firstly, it allowed Yukito to continue to stay by Misuzu’s side in a form that wouldn’t cause her pain to be around.
Second, through his houjutsu power, Sora was able to make the puppet dance and stave off Misuzu’s despair, and even create an apparition of Yukito through the doll’s power to show Misuzu that she’s not alone and help her continue fighting the curse.
Third, he spent multiple days attempting to drag the the dinosaur doll out from the grass so that Misuzu might be able to find it, and eventually his efforts paid off when it was placed on the shrine altar and entrusted with the wishes of the townspeople, which eventually helped Misuzu stave off the curse a little longer.
And finally, when Misuzu eventually disappears from the world, Sora takes everybody’s hopes and dreams to the sky, as a chronicler, a messenger of the Earth to the heavens, in what I like to think of as an honorary winged one. He takes it all, returns to the sky, and after finding the original girl in the sky, they return to the Earth together as the boy and girl on the beach. None of the AIR Route would’ve been possible without Sora; Misuzu would’ve lost to the curse and died before Haruko could even come home. In that sense, Sora is very very important.

Second, through his houjutsu power, Sora was able to make the puppet dance and stave off Misuzu’s despair

Oooh I remember a chat I had with @LinkThinks about this a few weeks ago. He said something along the lines of how Sora didn’t use his Houjutsu to move the doll, but was actually just moving it with his beak. If you don’t mind elaborating more on this, Link, then that’d be great!

Ohh. Re-reading this scene, it looks like I misinterpreted it. Yes, he picks up the doll with his mouth and tries to make it walk without any special power. But he is able to communicate with her as Yukito in a dream. I guess this is like, giving her a vision through houjutsu.

I was wondering about that, actually. It is revealed in summer after all that one of the powers of houjutsu was “Making people see what isn’t there”. On the onset, I thought that that could have been a manifestation of houjutsu, more than anything.

Oh yeah, and because the podcast never covered on this, I wanna ask this question again:

So one keypoint I wanna bring up is when Sora regains his memories for a split second. Firstly, Sora remembers a scene where he is Yukito, controlling the puppet, and Misuzu suddenly approaches him, and they hug each other. As we all know, this doesn’t happen; they do hug, but not in this manner. Why did Sora remember this scene, even though it didn’t really happen?

I don’t think the scene should be taken literally. The scene is basically a mixture of a bunch of different memories flooding into Sora at once. It’s like a dream, based on things he remembers in his past life.

Apparently crows don’t forget human faces. Which makes a lot of sense for Sora’s reactions to Haruko and Yukito and MIsuzu

Sora gets better and better the more I learn XP