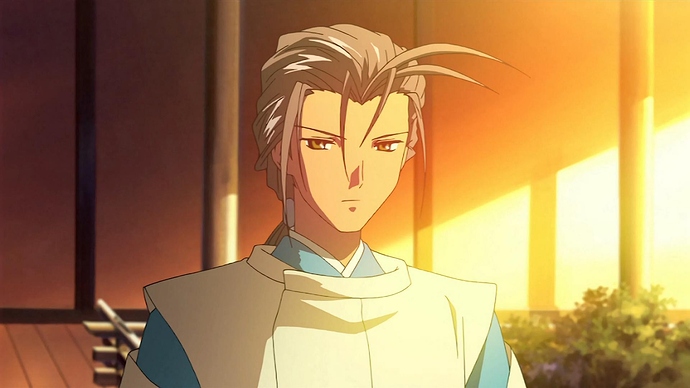 Discussion topic for Ryuuya’s character in AIR. Feel free to discuss anything from the Summer route and Dream arc, but mark any references to the AIR route with the [spoiler] tag. AIR Bookclub discussion begins from the first reply.

Feel free to use this topic to discuss Ryuuya’s character for the Summer route portion of the AIR Bookclub!

Best character, what a swaglord.

It’s weird to find someone so open minded in ancient Japan of all places and he doesn’t fit in at all, but he’s 2gud.

Ryuuya is pretty fantastic. He’s a man that had a very traumatic and rough upbringing, but somehow manages to come out of it a pretty decent person. He’s no stranger to war and killing, but once he found something he wanted to protect in Kanna, his good side really began to shine. He’s a very simple guy, just looking for something to believe in. But he’s not one to simply accept things as they are, and when it comes time to resist the status quo and become a fugitive to grant Kanna’s wish, he accepts the responsibility remarkably well. He also has a very interesting bond with Kanna and Uraha, acting as a father figure to Kanna and something more like a partner to Uraha, forming a nice little family unit. One of the most remarkable things about his character is his vow of pacifism, and how quickly he formed the vow and how hard he strove to live up to it.

When Kanna dies, he momentarily loses his will to live, but it is quickly restored after Uraha puts her life in the line to protect him. Together with Uraha, he dedicates what little time he has left on the Earth to finding a way to save Kanna. The answer they reach is to bear a line of ancestors in the hope that one of them will be able to break Kanna’s curse and save her. In the end, he found a peace and happiness he never would’ve expected in the loving comfort of Uraha, and the knowledge that his bloodline would continue his journey even after his death. At the very end, he passes away with a smile, before returning to the sky where Kanna is waiting for him.

Ryuuya is a great guy.

In the end, he found a peace and happiness he never would’ve expected in the loving comfort of Uraha

That’s one line that I really loved about Ryuuya. His only condition being that he dedicate the rest of his life to Uraha. I don’t quite know what his motive was on that; perhaps he was searching for his own happiness while he still could? Or perhaps he wanted to give Uraha her happiness while he still could? Or perhaps it’d make them feel more like a family, one that Uraha could tell stories about to her own child so that they may remember Ryuuya in a good light. Whatever the case, it was very noble of him, and it sure beats agonizing over what cannot be solved for the moment.