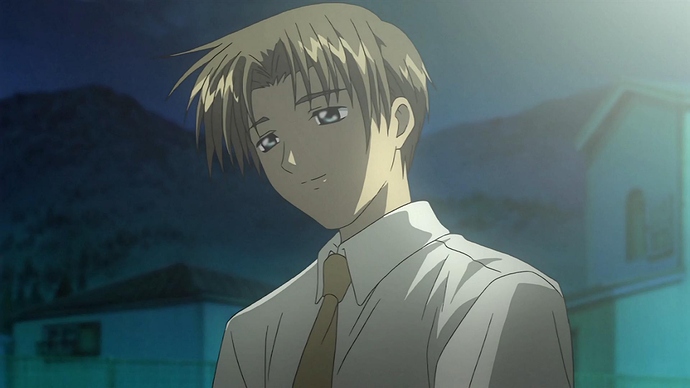 Discussion topic for Keisuke’s character in AIR. Feel free to discuss the entirety of AIR without use of [spoiler] tags. AIR Bookclub discussion begins with the first reply.

Keisuke is an ass

No he isn’t. He may be painted as the antagonist and a source of conflict in the route, but in the end, everything he did was because he believed it was in the best interests of Misuzu. I can’t call him a good father, but I can understand why he did the things he did, and I can understand how he loves Misuzu.

The focus of the story definitely wasn’t on his character though, so we don’t know the full picture of him, but we can speculate. He may be a bit stuck up, but they went to lengths to make sure he wasn’t painted as a villain. It was more like, his presence at that time happened to be a circumstance of fate trying to test Haruko and Misuzu’s relationship…

He was ignorant, for lack of a better way to put it.

He’s the bad-end Key protagonist we’ve seen many times before. The one who ran away when things got too difficult, but never stopped loving the person. In the end he has justification for all of his actions, but he is a man who failed to protect someone close to him. Despite that, I can’t hate him.

No, see, it’s not Misuzu he was being an ass to. I get it, he cared deeply for Misuzu, and, because of circumstance, he chose to have Haruko raise Misuzu instead, in hopes of it being for Misuzu’s benefit.

It’s Haruko he was being an ass to. He left Misuzu with Haruko for 10 years. 10 goddamn years, of having Haruko loom over the fact that one day, he could just take Misuzu away. But even if he does, what then? Even if Misuzu wasn’t cursed, and he took her away when she was 15 or so, then what good would that do? Misuzu would almost be an adult by then, and having him take care of her at that age would only be purely for convenience’s sake (give her a house to live in until she gets one of her own). And even then he and his family were persistent to not allow Haruko to make any claims over Misuzu whatsoever.

Sure, I can imagine him wanting to get Misuzu back after seeing his daughter in a wheelchair, but he made those claims to Haruko before he even knew Misuzu’s current state. At that point in time, he probably thought Misuzu was fine, and just wanted that authority over her and Haruko simply because he is her biological father.

Maybe, maybe not. We don’t have enough information to determine his motivations for coming to take Misuzu.

But the one thing I think was apparent, was that he had no desire to go against Misuzu’s wishes. If she simply told him that she wanted to stay with Haruko, he would’ve accepted it. I think he just wanted to some peace of mind, and with how Haruko was hiding her from him, he grew suspicious (and worried).

Maybe if he actually got in touch with his own daughter sooner, he would have known that sort of thing. Of course, by the time that he goes and buys her a cake, it’s already too late and he’s too afraid to reconnect with someone he hasn’t seen for ten years.

I like characters like him because he’s real and it’s part of the cool side of Key bad ends- And even some true ends. Maeda doesn’t bullshit with character designs and creates real flaws that you can hate, but agree with. It’s relatable and it’d more than likely be hypocritical to be so against the idea because there’s little doubt in my mind that readers have had similar thought patterns or done similar things. I know I have.

He IS being a total prick about it- However I think his desire to rekindle something that deep down he probably regrets losing is agreeable, even though it’s extremely detestable from our point of view. It’s a relation to not knowing what you had until it’s gone, but he goes a step further into twisting the knife he stuck into himself by trying to what is pretty much impossible and insane to think rightly of.

he’s too afraid to reconnect with someone he hasn’t seen for ten years.

Bingorino. Even he knows it’s insane.

But, okay, ignoring the fact that he shoulda coulda woulda talked to Misuzu sooner, he could have at least shown some respect to Haruko when talking to her. He tells her straight up “Oh since you’re doing so well, then there shouldn’t be a problem when I take Misuzu away” despite knowing full well that Haruko doesn’t want that to happen. If he genuinely wanted to know what Misuzu was thinking before letting Haruko have her, he could have just told her straight-up “Before I let you adopt Misuzu, I have to know that that’s what she really wants”.

It’s the choice of words that he uses that makes him, in my opinion, an ass.

Rabu Rabu Daughteru pure intentions makes it all ok no he’s a dick.

He’s ignorant and throws Misuzu around at his convenience, and acts like he matters a god damn thing in her life after 10 years. I don’t even like Haruko, like, a lot, I don’t like Haruko, but she’s completely right in her opposition of him.

He hasn’t the right and was a tosser about it. Fuck the guy.

I neither liked nor hated the guy, but deym did I pity him a lot by the end of AIR. He made careless mistakes one after another and was extremely awkward all throughout the story, which is why he came off as a bad guy. He was certainly an irresponsible parent, but it was showing that he just wanted to correct his mistakes, especially to his daughter.

Perhaps his role was to highlight the difficulties of being a parent, which is another prevalent theme in AIR. He lost his wife, and as a single parent and a father whose societal expectation is to work for his family (I’ve heard some stories of overworked employees in Japan), he might have been lost on how to take care of his daughter, and that might have started the downward spiral of mistakes in his life.

His relationship with Haruko got resolved by the end, but holy macaroni certainly not to Misuzu. I just… felt so much pity it’s heartbreaking.

So you apparently don’t care about seeing your child until her illness is getting bad ? I understand that you didn’t get calls much, but a Father shouldn’t need a call to go visit.

Then you take Misuzu as if she wants to go with you ? LOL. GOOD JOKE BOY.

THANK GOD YUKITO PUNCHED YOU IN THE GUTS IN THE MOVIE.

Worse Key father in the entirety of Key fathers that we know of, as in name, appearance, etc.

But Misuzu’s father can’t even take care of Misuzu. He is worse than garbage. He’s not strong. The fact that you didn’t even care to bother seeing or visiting your daughter until her illness was kicking in hard, just shows how ungrateful you are.
As a person too. So you apparently make Misuzu stay with Haruko, after the mother dies ? Where’s your senses, realize that Haruko has a life to attend to. She shouldn’t be taking care of Misuzu just because your butt can’t handle it.

There’s only 2 scenes in the entirety of Air where I feel as if you were a good father.

Other than that, you were a horrid father. I am an anime-only watcher for Air. The movie was pretty much boring. The only thing I prefer in the movie, was the fact that everyone was against the father, or shown to be against him more.

I would probably respect you as a father more if we ever got a manga that showed things in your perspective. How you felt, what the reasonings were as to why you never bothered to visit, etc (well if the reasonings were GOOD.) . But it’s been 16 years so I doubt they’ll release anything like that. But until they release something like that, you are the worse father in Key history that we know of (appearance, name, contribution to the story, etc.).

Pretty sure Misuzu got everything from her mother.

I have had a lot of time to ponder about Keisuke in the time since I finished my first reread of AIR and nor that he has had some time to brew I want to say that I love the guy. I should preface by saying that AIR is my favorite story ever. As time has gone by I have come to deeply love this story about friendship and forming a family and Keisuke, while acting as an antagonist of sorts, is representative of this.

Keisuke is disliked because he is an antagonist, but what is important to remember is that Keisuke wants the same thing as every other character in this story, a home and a family. Just as Hijiri and Minagi seek out a family in their respective side characters, Keisuke longs for the home that he abandoned. Misuzu was once a part of his life that he abandoned. He is, in this way, not much unlike Tomoya. The thing that makes me sympathize with Keisuke is his regret. He does not set out to do bad things for the sake of doing bad things, but rather makes poor decisions in the pursuit of what every character in the story wants–a family.

What people forget is that Keisuke willingly left Misuzu to live with Haruko after seeing their love. He didn’t want to tear apart the family that his daughter had finally found. And when finding out that Misuzu passed away, Keisuke did not blame Haruko, but rather sympathized with her loss and welcomed her to come back and become a part of his family.

What Keisuke represents is the longing for family tearing someone apart. It is how a man’s desire for happiness was contrary to that of others and how he learned to wish for the happiness of the people he loved more than his own.

I like Keisuke. He has a small arc and plays a small roll in the story, but I love the guy all the same.
Basically AIR is the best.