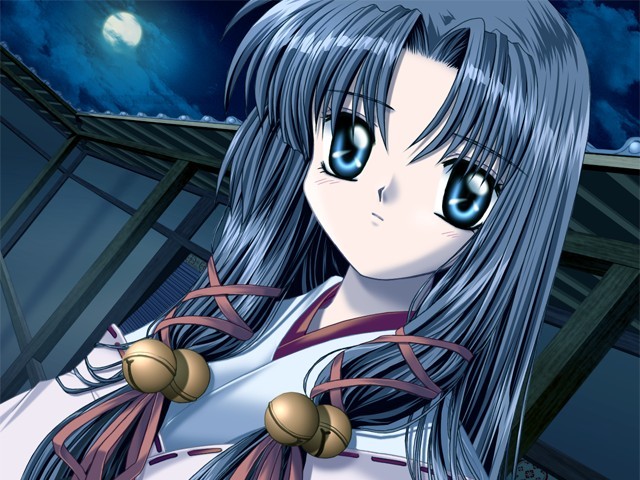 Discussion topic for Kannabi no Mikoto of AIR. Feel free to discuss any events of the Dream and Summer arcs without restriction, but please tag references to the AIR route with [spoiler]. AIR Bookclub discussion starts with this post.

Her birthday is the 18th of January (apparently?)

I thought Kanna was very funny and her lines are really enjoyable to listen to. That is probably pretty important since otherwise the spoiled princess character can be really annoying. As Ryuuya says it’s really funny when they tease Kanna and she goes “Yakamashi”. I usually just need a small hook to empathize with a character and a weird speech-pattern did the job this time. Well since the basis of Kanna’s character is that she has lived her life hidden from the world there is not much to say about her. She is selfish and doesn’t know much about anything. It’s a good thing that all she wants is to spend time with her mother, a chance no one should be denied so it easy to want her to succeed. I can’t think of any major complaints about Kanna’s so that’s about it I guess.

Kanna bothered me a fair bit. In the end I more or less see her as a piece of a far greater story and is more or less there as insight, if that makes sense. Primarily serving as a new look on some things in the VN. Summer itself was basically made by Ryuya and Uraha, but you do have to appreciate that their being great relies heavily on Kanna’s existence. She felt like… Sort of a means to an end, I suppose.

At any rate, there are some really neat quirks and things about her that make her kinda neat, but her herself isn’t all that interesting to me. x.x

In the end I more or less see her as a piece of a far greater story and is more or less there as insight, if that makes sense.

That’s pretty much how the rest of Air is. It’s just another chain of the curse. We got a better insight to Yukito and Misuzu, but who knows how long that will keep going on through generations? Some travellers may never meet the girl in the sky. Some may be incapable of living how Yukito does without the help of the power. Some may just choose to not tell the story to their child.

Kanna is a symbol of purity. In the beginning of the Summer arc, she doesn’t understand anything about the world or the situation she’s in. All she knows is that she hopes she can meet her mother. Without fully understanding the potential consequences of following that dream, her friends Uraha and Ryuuya support her to make sure that dream can become realised. But all the while, they make it their mission to ensure that Kanna doesn’t lose herself to the mission. She had Ryuuya vow to never kill, and Ryuuya does his best to make sure he never breaks that vow, while also ensuring that Kanna never regrets making it either. Uraha and Ryuuya are united in trying to make Kanna happy, but I never thought of her as a spoiled character. Her life was indisputably cruel, so wanting to help her should be natural for the people who love her.

Because of her upbringing, she acts a lot like a child, but like a child she is inevitably very curious about the world. She’s always asking Uraha and Ryuuya questions about what the world is like (their answers often ending up quite different), and she tries her best to face reality without shying away from it. At the very end, after witnessing her mother’s death and knowing what fate awaits her and her friends, she sacrifices everything to ensure their survival. But in the end, it’s all for naught, as her actions bring about a thousand year curse for all of her loved ones, and all future incarnations of herself. Of course, nobody can blame her for this; it is yet another cruel twist of fate. Kanna is ultimately a very tragic character, but it’s nice to imagine that at the very end, she was able to find peace, after all her dreams were realised through Misuzu.

She had Ryuuya vow to never kill, and Ryuuya does his best to make sure he never breaks that vow, while also ensuring that Kanna never regrets making it either.

I never had much of an opinion of Kanna she was always just sort of that Misuzu-esk character, but this is the one gripe I had with her character. I understand that she was this symbol of “pure”, and she had probably never witnessed someone being killed before, but she knows now that these people are out for her to the point they burned down the shrine they had just left. Yet she childishly pitches a fit when Ryuuya is going to take a life to protect hers, and forces him to vow to never kill knowing that he won’t break it. If you take a little bit of liberty you could almost say without this vow AIR never happens. If Ryuuya doesn’t make the vow to never kill then one of two things can be inferred to happen, one Ryuuya is killed by the warrior monk on the mountain and Kanna is captured/killed by the monks, or two Ryuuya is never wounded fighting the monks, and doesn’t slow them down while escaping which allows them to get off the mountain without Kanna being caught up in the curse.

Like I said I understand the idea behind it, but I’ve always hated these privileged characters who have others risking their lives for them, yet they tell them to not fight to full effect putting them in even more danger because “my morals!”.