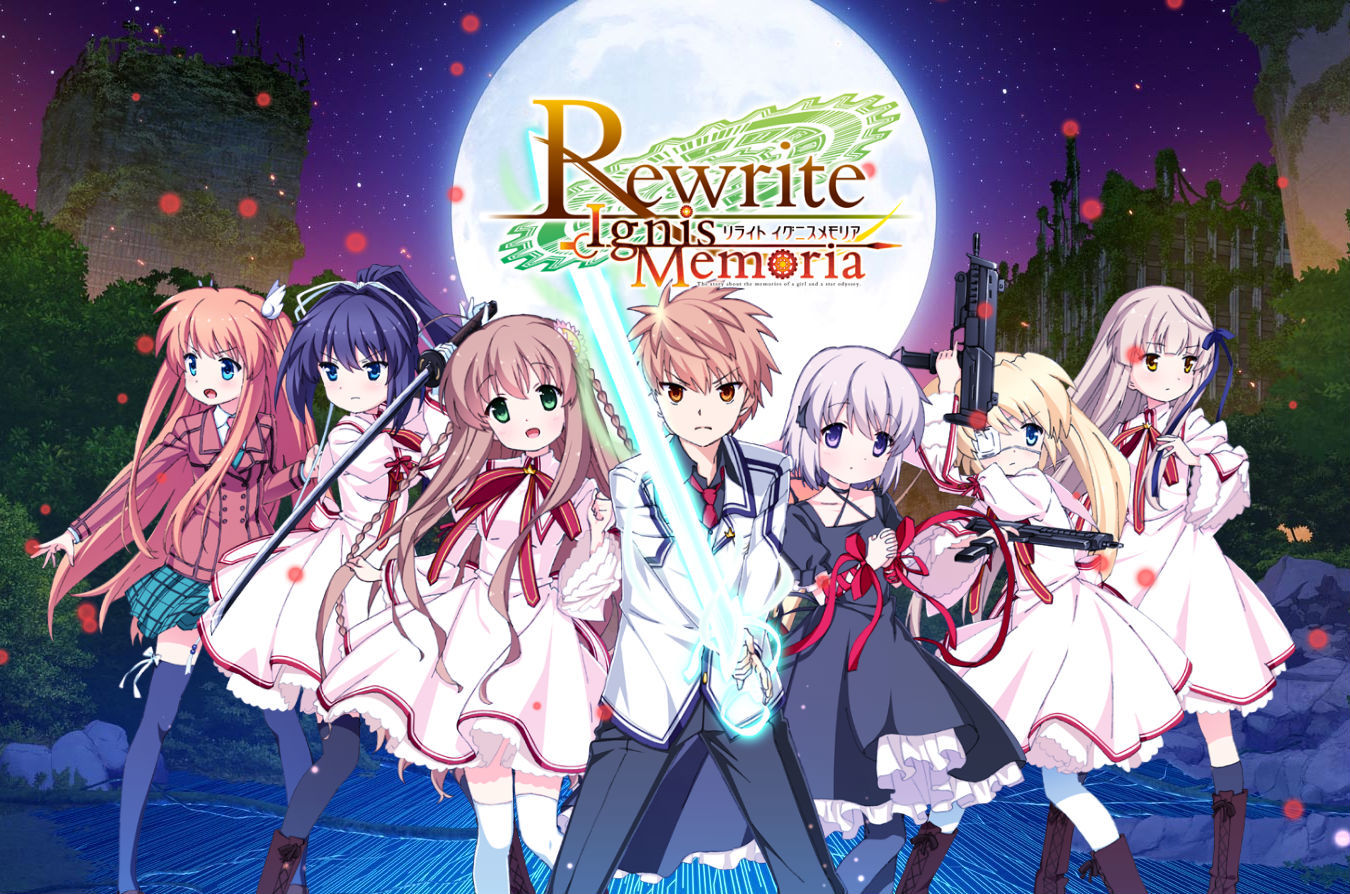 General Discussion Topic for the upcoming Rewrite: IgnisMemoria game for iOS and Android! This is the place to talk about story, characters, events, and everything about RewriteIM.

Spoilers for Rewrite and Harvest Festa are permitted in this topic, as they’ll probably influence the original scenario present in this title. Just don’t blurt out stuff for no reason.

Add everyone here under the Amigo menu to visit their Clubrooms and use their Leader as a temporary Party Member!

The fuck is this shit!? I thought mobile games were supposed to be crap, but this looks fun.

Edit: Tanaka actually said he wanted to make a game like this about 4 years ago in Official Another Story Rewrite. 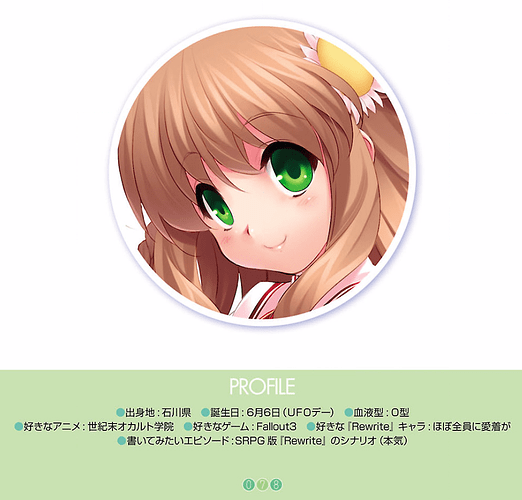 so are you gonna translate the menus or something when it comes out? or get help from Helios and Pepe? Either way I’ll probably try this out

It depends entirely on how fun I find the game at launch, but yeah I’ll probably be trying to help with everything to make it easy for Kaza members to jump in.

Well. It doesn’t look bad, actually…
I was more skeptical before, but now I really want to try it.
Still, the true way to enjoy it on a release date… is to don’t anticipate anything exceptionally good.
And yeah, I’m lured in by that “50 routes”… Inouway-route, finally!

Update:
https://twitter.com/rewrite_im/status/809300410989088768
By following Rewrite IM official account & retweeting that twit up there you can win an autograph from Rewrite’s seiyuus. 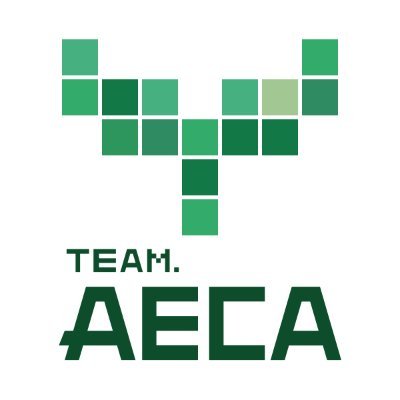 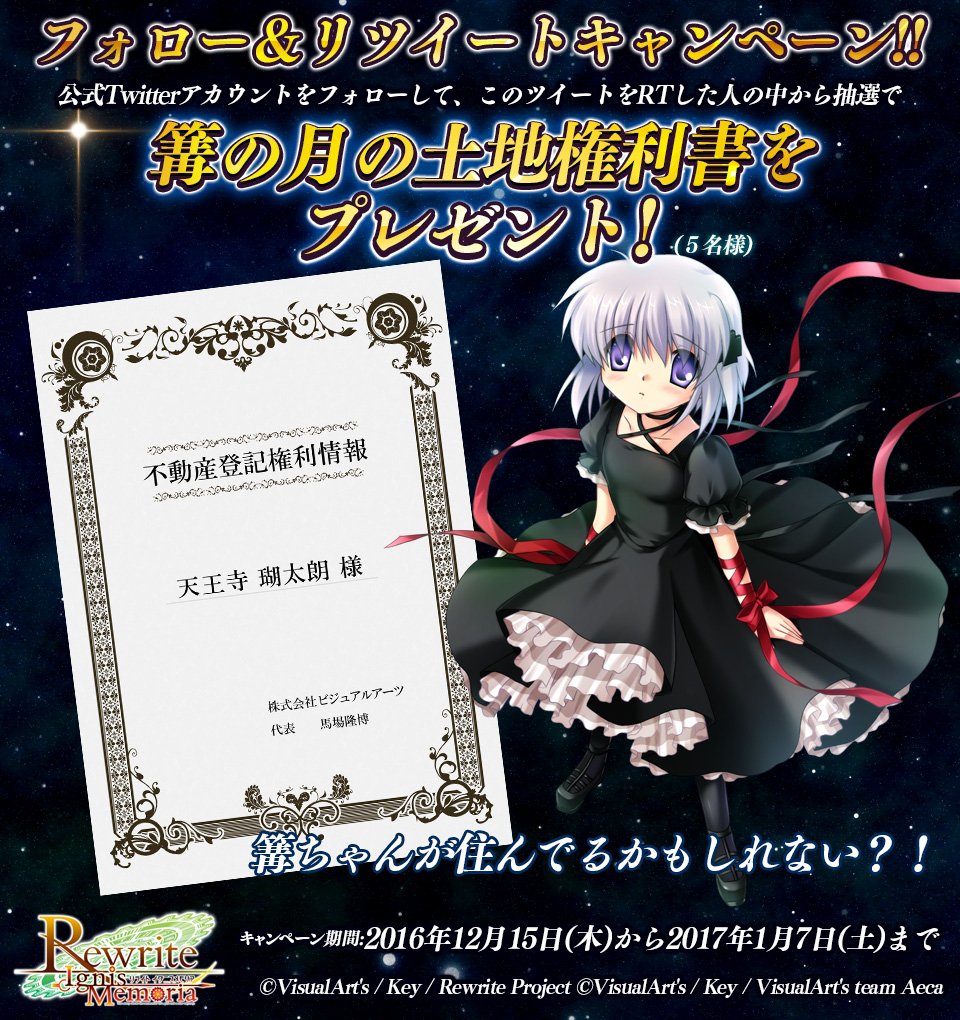 And with this twit you can win some good nice property right on Kagari’s Moon (permanent resident card).
5 Likes
LinkThinks December 15, 2016, 10:59am #7

Huh. I didn’t really have anything I was expecting, but I’m still rather surprised at what the game looks like. From an asthetic standpoint it’s pleasing, and certainly at a glance it looks fun to play. Then again, if they managed to make it look like it wouldn’t be fun to play at a glance I’d find that pretty sad.

My personal biggest issue is that it’s hard for me to get excited about investing into it given Key’s current track record on these things (and the fact that I just started FFRK again, I suppose). Even if I might not play it the entire time, the prospect of them just kinda packing up their bags and killing service isn’t appealing in the event I do enjoy it, and I have trouble seeing something based on Rewrite like this being more popular and having more longevity than something based on Angel Beats, just setting gameplay aside. I’m by no means a mobage expert, but I know that the market is saturated with them, and if some series branding alone isn’t likely to really put you out there/sustain you, you’d damn well better hope the gameplay is good enough to keep people.

I’ll be honest, I’m not psyched about picking this up, but I’ll still probably hop along from launch and see how long it holds my attention. I had fun riding the ABOW release hype wave and sharing mechanics and things with other people, and I undoubtably like Rewrite better than Angel Beats, so that’s a plus as well… Buuuut if I’m not having fun I’ll be quick to drop it this time and just content myself to looking at the nice art online rather than gouging my soul out trying to get my grubbly little paws on whatever whale bait they lay.

Just a little bit of trivia.

Ignis Memoria is Latin for either Fire Tragedy or Fire Memories.

That’s oversimplifying it an awful lot, just like how Umineko means seacat.

Not that I give the creators any special credit, it’s probably something that just sounds cool.

…oh, that’s where all those Seacat jokes come from

At least it looks more interesting than expected, might try it out.

Ah, for Android? I’m sure we’ll have that figured out pretty quickly.

We’ll see if my love of Rewrite can overcome my massive hate of gatcha-based mobile games. I’ll give it a try on launch but I somewhat skeptical about whether I’ll stick with it.

I wonder what characters would be in the game.
So far confirmed in one way or another were Kotarou, Kagari, Kotori, Chihaya, Lucia, Shizuru, Akane, Sakuya, Yoshino, Inoue, and Esaka.
So, what about Imamiya, Tsukuno, Kashima, and so on…

This looks fun, but I hope, more than it being fun, that someone would translate all the story XD. 50 routes is a lot though so I’m not expecting that much.

110,000 People pre-registered on the first day alone, so we hit all the announced reward tiers already. They’ve announced they’ve added 150k and 200k registration reward plans but haven’t said what they’ll be yet. 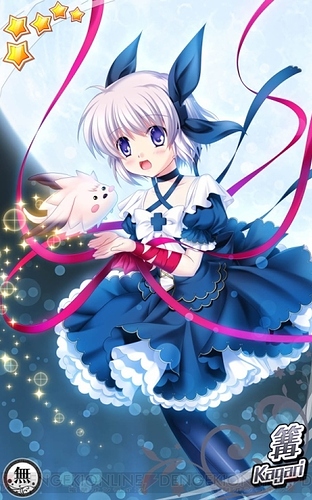 And now we can speculate on what that 「無」 (nothingness) in the left-down corner can mean.
Well, actually… its probably just a card’s element, but still.
On the 2nd though, that may also refer to special skills or smth.

Now I’m wondering, who will be writing the story scenarios?

You know, the way this card is done actually implies we were wrong about Creamy Kagarin being her own character slot seperate from Kagari, based on the name of the card.

What this DOES imply however is that rarer cards, probably just 5*, unlock character costumes.