I’ve been avoiding all the Rewrite topics since I dont want to be spoiled in any way at all more than I already have. But I just wanna pop in here and say something while its on my mind.

I love the metaphor with the cats. It’s like, they try to be subtle about it, but at the same time its not subtle at all if you know anything about how galge work. Really nice piece of foreshadowing to plop in there right at the beginning when nothing has happened yet, but I also like how they keep bringing the cats back. Neat implications. Nice parallel.

I’m sorry, but I have no idea what you’re talking about

Have anyone tried completing all Mappie segments? I think it’s really funny
But somehow I can’t complete Oct 25th segment (the one you get when you choose to follow Kotori

I was also one of those people who found the common route to be wAAYYYY too long, but that’s probably because I was expecting to get to a route already at that time. XD

But reading through some of it again is lots of fun. I love the giant spicy parfait scene, I love the overreacting Kotori moments (President Chair!), I love Shizuru’s personality here (DEKIRUYO), I love Lucia’s cursing, and I especially love all the Yoshino moments. His moments are mostly hilarious af, but he’s not really stupid. Just really cheesy way of speaking haha. he’s best girl

When it comes to the girls, it’s Kotori>Shizuru>Chihaya=Lucia>Akane (ironic considering my avatar pic) for me, but I really like all of them, and they had their moments in the common route. I can’t possibly dislike Akane when her voice is wayyyy too sexy (Youkoso Gypsy), her degrading insults are the best, and she seriously recorded Yoshino’s cursing, sampled it, and turned it into some hip-hop remix track. XD

Then, there’s Lucia. Her screaming voice is precious. My personal favorite line from Lucia is definitely “Die, decompose, fertilize some plants and help them lower CO2 levels!” I also love Chihaya for her adorable-ness and general low-key Tsundere tendencies. Shizuru is wayyyy too adorable to not love, while Kotori is just lots of fun to be with.

BTW, since no one has brought it up yet: Okay~ Shake it now baby noww~

Have anyone tried completing all Mappie segments?

That’s part of getting the oppai ending, so lots of people have. Here’s a map for the 25th. 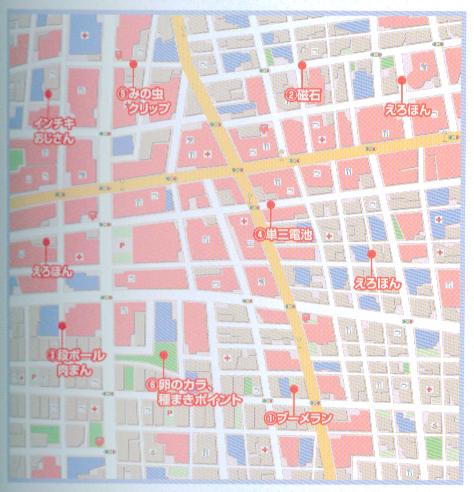 It’s been quite a lot of time since my last serious post giving my impressions about something, but here I am.

I went back to playing Rewrite, and I’ve gotten far enough to be able to talk a bit about its common route. While I haven’t gotten the famous Oppai Route yet Rewrite’s common route feels somehow weird, but still good: it feels similar to Clannad, where you are just doing your everyday life but tons of weird shit happen around you (or you create those moments yourself thanks to Kotarou’s stupidity).

Characters like Kotori are very pleasing to have around since they are very calm and intelligent, but while that relaxed atmosphere they create would suit more an environment more similar to Kanon, they still serve as an Oasis to rest amidst all the hectic scenes that Lucia and Chihaya star. Other characters like Akane are just too weird to feel relaxing, but since they don’t seem to be actively aggressive, I’m comfortable being with them. So far, I like Kotori the best for her having the most normal attitude. She’s down to earth and still jokes around with the being an idol thing.

Characters aside, I found mappy thing to be a pretty good idea from the start, allowing you to explore the city and read some hidden scenes. However, I soon became tired of having to search for all the locations without having a single clue about them, so I guess some hints would’ve been nice. Still, it’s a good addition.

Also, the combination of city, home and school scenes feels fairly balanced. This is something which helps with keeping the reader’s interest with varied locations and situations, so that not all the common route feels like a succession of jokes made by a bunch of characters. This way, more profundity is given to the Rewrite universe.

AMIGOOOOOO! Never ever have I been more pleased with the usage of Spanish in a videogame. Normally, Mexican variants of Spanish are used to characterize some Spaniards, hence becoming awkward because 1: they are heavily dialect-influenced and 2: they hardly ever are well used and feel cringy due to bad placement or bad Voice Acting. However, Rewrite takes just one Word that is used in all dialects of Spanish, is understood by a huge amount of non-Spanish speakers and uses it in an unexpected way that surprises the reader. Well done!

Overall, it feels like a very well balanced route, but while Mappy is a very good addition, I’m still missing the amazing atmosphere that Kanon had and the minigames once could find in Little Busters. Rewrite’s is a good common route so far, but it’s still far from being the best KEY-wise in my opinion.

Alright i have been too lazy to write this up until now.
The common route is mostly entertaining, i’ll divided my opinions of heroines.

Chihaya
She an airhead.Don’t have much to say about her so i’ll talk about Sakuya. in the first few minutes of his appearance it’s clear he dislike kotarou. The reason isn’t explicit for this i guess he just hates kotarou’s lack of maturity and his indecisive aura he gets form him, though he kinda seems to warm up him in the later parts. For other things about him i’d say he seems a guy with a lot of experience.

Shizuru
Shizuru started out cute but she only had that much going for her at most. I was a little interested when Eska showed up and he showed interest in the thing kotarou was chasing, from that i believe there is some undercover organization which Eska and shizuru are somehow involved, that would also explain the absence of her parents her living and her living alone.

Lucia
Lucia’s funny moments are one of the times i liked a tsundere who can speak without stuttering or denying things every time and even though relies on physical abuse trope. Her character is one who express the employment of rules so it converses with the environment theme of Rewrite also her association with shizuru too.

Akane
Akane started out good, got the impression of powerful mysterious women but it started to dwindle a bit along as the occult club activities started. It picked up again at the end though where her mysterious nature was maintained again with her disappearance as she solves everything in the end for kotarou when he needed help.

The relationship between all the female cast is kinda there. It could be because i chose every choice leading to my lovely kotori but i did redo those choices which didn’t revolve to a kotori choice and even with that i don’t think the interactions were anything on the level of kotori and kotarou’s.

Yoshino and kotarou is a main highlight. Yoshino is someone who had friends before but now he’s alone because he had to separate from them and kotarou is some who never had many friends to begin with. One part stucks me from them is when they are trapped in the unending corridor of school. Yoshino says that he doesn’t like how kotarou behaves and he looks down on others. We all put on a mask sometime in our life to blend in and i guess that’s not necessarily wrong but to Yoshino maybe it’s bad. I don’t really know how or why maybe when i read more then i’ll get it. The relationship is fun though i got many kicks from their activities together especially that naked underground people’s invasion, It was then that i earned play with yoshino

Another thing is what akane says just before the end of common when they come back after seeing the pollution caused in river. To stop waiting around for someone else to take charge and do things yourself, i think that hints back to the choice we cant make in common. “To change the world or yourself” Honestly i think this choice relies on people’s perspective if people saw fault in the world they will change it where if they saw fault in them they will change themselves. I think i’ll just change the world as i’m evil and i see world as more wrong than i am, it’s just about who’s the lesser evil for me.

The end didn’t really shook me. I knew that kotarou had superpowers and also kotori when she used her healing thingy on plants. It just affirmed my thought more that shizuru and lucia are related to an organization ore something their detective like skills also confirmed this. I do have many questions though like how or what was that dragon there.

And now the MVP of this route ‘Mappie’. Honestly this is the best feature in the VN for me. From jumping into lakes to poking a turd, to messing with a neighbor i had great fun with this mechanic.

Also this thread needs more posts, we have just scratched the surface

So for me not the most promising opening - two guys squaring up for a fight ( that again?!) but I found the Common Route much more to my taste the the LB! one. For some reason the comedy just appeals to me more and I warmed up to the heroines and other main characters very quickly. There wasn’t one heroine where I had any negativity towards going into their route, and it felt very rewarding to get everyone into the Occult Club.

Mappie was a bit confusing at first but I liked the way it made you feel as if you knew this fictional city as a real metropolis with hidden or dangerous areas and not just some backgrounds against which odd things happen. I am a completionist so it was good fun to make Kotarou do stupid things like jump in the lake “JUST DO IT!” ( and if you do then Akane’s following question “Why are you so wet?” one of many little moments that show how much thought has been put into this).

I’ve completed all but a few of the optional quests and they too added much to the enjoyment since the interaction of the characters is so good, and some are stupid in a funny way.

So the route is mainly centred on slice of life but the elements of mystery or impending danger, plus the questions over why seemingly ordinary characters have “superpowers” that are inserted feel quite organic and enough to tell you that not everything is as it seems on the surface; it all gave me a great appetite for the rest of the routes.

Don’t now if this is the correct place to ask but what do they mean by “tachie for Inoue” in Rewrite+?