@eptakyrios stunningly beautiful work, my friend. Soundtrack music such as theirs might not sound quite plain, but there is much depth to discover if one looks. Especially when transcribed to a piano, where even the lightest subtleties can be afforded even more musicality than an electronically-synthesized pop song. I am grateful for your efforts in trying to uncover these hidden gems, and will be definitely trying my hand at one or two in the near future!

If I may be so bold as to present my own transcriptions: perhaps first, in keeping with eptakyrios’ “symphonic piano” feel, here’s my effort at Tomoshibi from Little Busters! Definitely one that taught me the importance of voicing and keeping multiple melodies going: https://www.youtube.com/watch?v=7nhVfMn6274

And here’s my attempt at TheIshter’s Alicemagic, one of my best-loved songs from Little Busters again!: https://www.youtube.com/watch?v=_AIBlGSINzg

That’s some amazing performance right there! <3

OK, I bought the sheet music book I linked earlier, and it’s pretty gr8. If anyone wants, I can write up a guide on how to buy it so you can support the artists :3

I just realized this was included with the Little Busters! soundtrack. I can try to get some proper scans if anyone is interested. 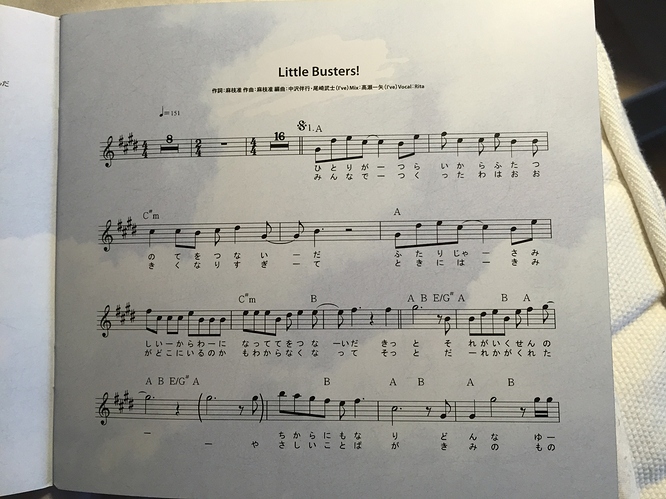 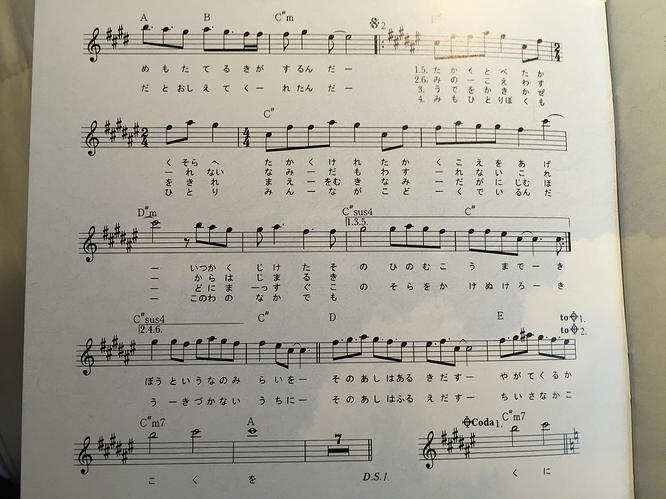 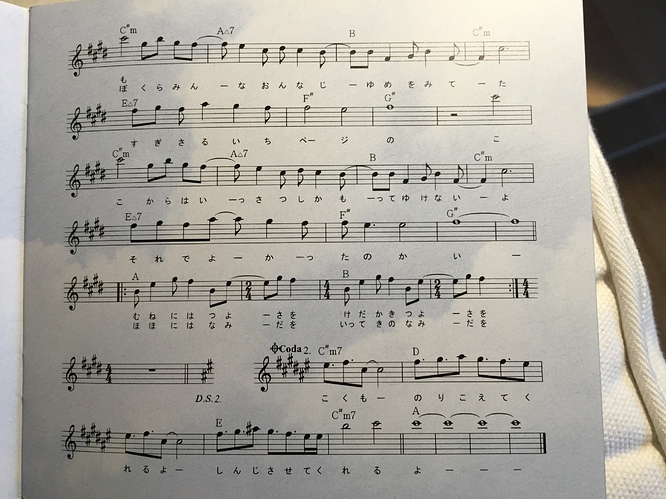 After a bit of a delay, Minagi’s theme, Niji, is finished. I’ve always thought it was a very inspired and fitting melody for Minagi, and still greatly relish the piece, so I tried to get the most out of Niji onto the piano. Though the transcription might sound more conventional in structure than the others, quite a bit of hand-stretching is required here (the maximum is a tenth - which is my maximum), and most of the piece can be awkward for the hands, which can make voicing a bigger challenge than it already is.

It might not be a crazy hand breaker like Schumann’s Toccata, but it is not at all easy.

Here are the sheets and notes. 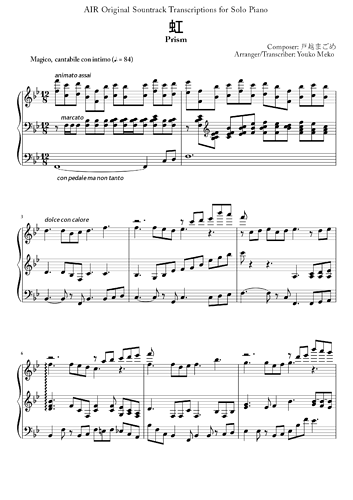 Difficulty ADVANCED Challenges Wide intervals throughout the piece for both hands – awkward figurations Slightly contrapuntal. I’ve been thinking of linking the visual novel (or …

This is beautiful and it captures so much of Minagi. I’m quite curious on your choice to use a polyrhythm at the very last section of the piece. I wonder what’s the rationale behind it? :michioh:

Thanks. While it may not come through in the MIDI file, but the final sections of Niji are meant to be the high points of the piece, where the melody comes through at its loudest. The quadruplets, following common time when the whole piece is in 12/8, can lend the last section a very agitated mood if played loud enough or quickened. Playing it metronomically might give that last bit of the piece a more layered sound, whereas playing it erratically can make it sound disorderly until the last chord is struck. Either way, it’s very unexpected and fills up the gaps of silence, making it sound somewhat unrestrained or out of place.
Other figurations and material might serve the purpose better, but that is all I have for it right now.

Here are the sheets and notes: 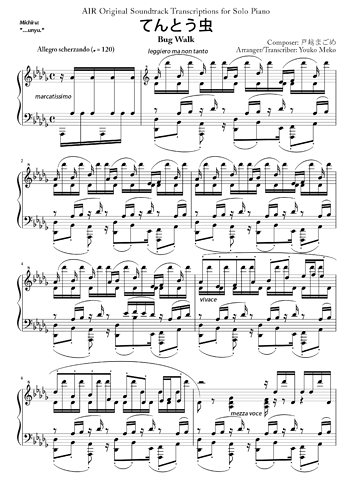 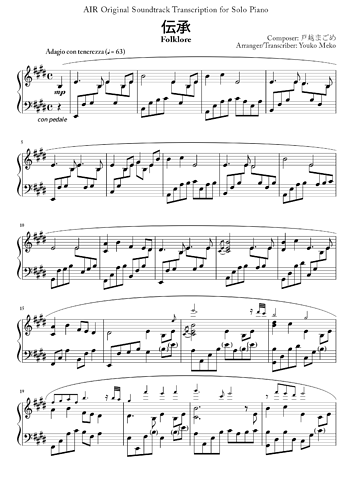 I was wondering if you could get me some proper scans of that Little Busters! music sheet. I was planning on picking up piano in a month or so and it looked like this could be doable with some weeks of practice bya complete beginner.

Therefore, I’m not in a hurry, so if you are busy, don’t even bother with it, though I’ll be extremely grateful.

Also, if any of you guys plays the piano, a few beginner’s tips would be greatly appreciated!

This is some really cool stuff! I, too, would like it if you made scans of the music

川 is finished. The first in a long line of less-than-cheerful tracks, 川 signals a quick about-turn in terms of the soundtrack’s atmosphere. I personally perceive the title to refer to the flow of time, like a river, so some of the ossias in the transcription may reflect that.

Here are the sheets and some notes: http://sheet.host/sheet/LJShjC

Nice cover! The sound was simple, yet deep and meaningful. I really enjoyed it.

Also, thanks for the links, at least they gave me a bit of an idea of what to practice and how to organise my practise time. One day I’ll play some of your covers and hope for you to give me your approval :kgoha:

Anyway, something I really appreciated was the Ossias. That way at least there are easier alternatives for beginners like me. Though this particular sheet played without the Ossias looses a lot of its identity.

It’s a fascinatingly clinical and a rather unsettling piece, and that reflects well in the title, which loosely translates to ‘fabrication’ or ‘pipe-dream’. In keeping with the track, since a fair portion couldn’t be directly translated for solo piano, this transcription has a rather sparse texture and quite a few hushed or murmured chords slotted in.

Sheets and minor notes, found below. 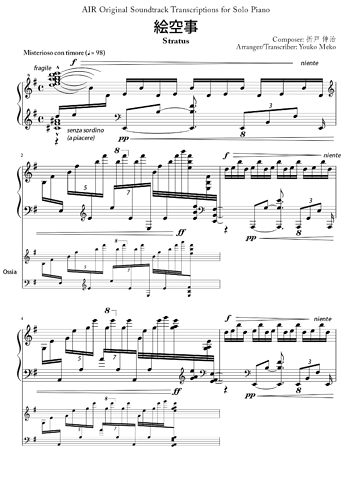 Difficulty INTERMEDIATE Challenges Dynamic control: frequent diminuendos from forte to niente for the ostinato, and some crescendos from pianissimo to fortissimo. 絵空事 is quite possibly the eeriest …

Next up is Sousei, which I am halfway through.

Sousei is done, though I am somewhat unsatisfied with the end-result.

It’s a rather wondrous and magical track in my eyes, full of subdued hope and tragedy mixed with tender yearning and warmth, conflating the Tanabata legend with the plight of the characters in Air. A pity it isn’t more well-known.

Sheets and notes below. 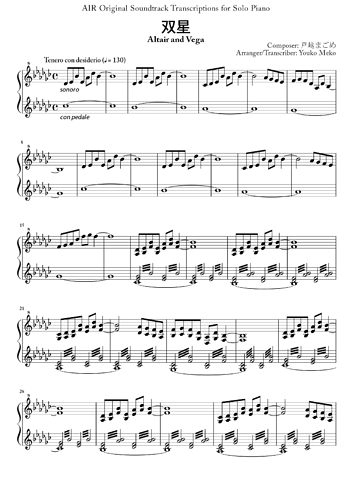 With this, that’s more or less half the OST done.

@eptakyrios, I would love to include at least one or two of your transcriptions in The K.E.Y. somehow. Any you’re particularly proud of? Could go with Natsukage because, it’s freakin Natsukage.

@Aspirety Well, I’m not particularly proud of any of them (and on that note, I’m not exactly proud of any of them either), but I’d love to have one or two of them up in the K.E.Y. Considering that most of the transcriptions are going to be revised when I finish the Air OST, I suppose Natsukage would be a good choice, since I don’t think I’ll change it much further and because it is Natsukage after all. Other than that, I guess I don’t have any other suggestions.

And now for something completely different.

It’s a small but suffocating,. and quite intense a piece of work - played during the climactic rooftop scenes in Minagi’s route, where she says her goodbyes to Michiru (or otherwise). I find the title particularly interesting, and personally think that it’s quite symbolic of Michiru’s plight. 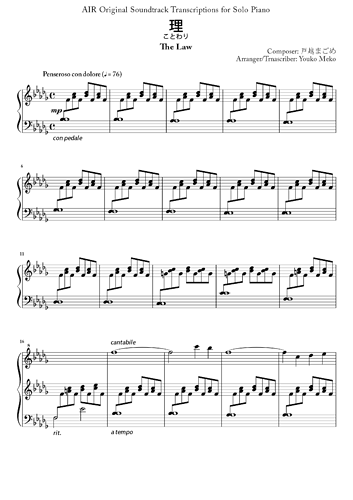 Difficulty MODERATE  理, as far as I can recall, plays during the final ‘rooftop’ scene with Minagi and Michiru, as they say their farewells and come to terms with Michiru’s inevit…

Enishi was finished some time ago, and here it is.

It’s the first of four tracks from the Dream arc on the OST tracklist, though Semigoromo is the first to play in the VN. Enishi, literally ‘Fate’, is also titled ‘The Way So Far’, which nicely captures the initial feel of Dream and seems to be a nod at the journeys of Ryuuya and Yukito alike. For one, I think Enishi embodies the nostalgic warmth in Air, and perhaps I also sense an element of wondering, wandering - arguably fitting for a wandering wondering title like ‘The Way So Far’. But this is just my unsolicited penny’s worth.

Below are the sheets and some minor notes. It might be one of the less taxing pieces, but the occasional left-hand arpeggios can be difficult to control - though definitely not as tough as Kaisorouku in that regard. 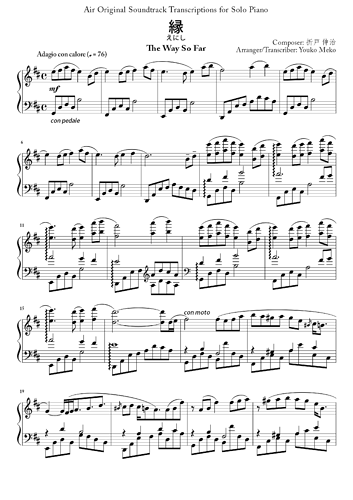 Next up will be Semigoromo, the final carefree track in the OST.

Semigoromo is done. This transcription isn’t one of my better ones, but that’s usually my first impression of whatever I finish.

Ostensibly the characteristic track of Summer in Air, and to some extent - Kanna’s theme, Semigoromo is also (in my view) one of the more memorable tracks in an already memorable album. The prevalent mood of noble gentility, graceful tranquility, injected with a spell of unhurried but fantastical wonderment, well encompasses the initial setting of Summer, and adorns the moments of peace that Kanna and co. stumble upon in their journey.

The subtitle, ‘Thin Clothes’, tells the essence of the track nicely. In my opinion, the ‘Thin’ part of the subtitle helps to explain the second section of the track, since it alludes to the need for Kanna’s party to cast aside their luxurious layered clothes in favour of garments more fitting the purpose of not surrendering to a horrible fate. But beyond that,

Here are the sheets and notes. 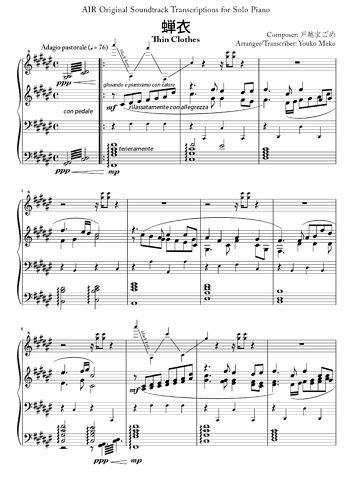 Difficulty PROFICIENT Challenges Black-key glissando galore. Watch out for bleeding, discomfort, and outrage. Multi-layered texture, like layers of garment. Not as tough as Sorabji though. Voicing …

The sheets for Semigoromo have 4 staves, like for Mizutamari. The staves do not indicate note distribution between the hands (as per usual), and are just like that to distinguish the many voices. Also, there are many lengthy pianissimo black-key glissandi here, so players should be careful not to injure their hands and leave a trail of blood behind. My occasionally helpful advice regarding hand posture would be to pinch your fingers together since the glissandi change direction without pause.

Next up is finally Kannagi, the percussive techno track that hardly anyone pays attention to. Since I began doing these transcriptions, I’ve always had my eye on making Kannagi as ridiculously fun to play as I can.

Kannagi is out. Once again, I’m not too pleased with it, so it’ll be rewritten in the later future (especially the ending).

Moving on, some of us may recognise this track as the ‘fighting’, or the ‘running with your tail between your legs’ track, since it’s only featured in those scenes with Ryuuya and co. And the rest of us probably never took notice of this track. Nonetheless, it can be said to be rather prominent - being the only techno and percussive track in the album.

The title seems to be a rather obscure phrase, which marries the character for ‘deity’ with the ‘nagi’ from ‘naginata’. 薙 (nagi), is copied wholesale from Chinese, and tends to take the meaning of shaving, shearing, cutting short, tonsuring, etc. From Wiktionary however, it was originally used to describe mountains collapsing, connoting the fall of majestic figures. On the whole, the title can be interpreted as ‘killing deities’. The subtitle, ‘Dissidents’, adds a political bent to the idea.

Returning back to the transcription, this is, thus far, the second piece given the ‘Insane’ difficulty rating in the Air OST, though in my estimation, it can be seen on the same level of Natsukage, Tentoumushi, and Sousei. Featuring a dash of Scarbo-esque figurations, repeated notes, rapid chromatic minor third and major second scales, varied articulations, and hands crossing, intertwining like it’s nobody’s business, it was difficult to park it under ‘Advanced’. The end-product also sounds rather frenetic - almost schizophrenic - and at points seems polytonal, maybe fitting for such a track. I have always had it in mind to make this transcription a colossal but quiet toccata, and I suppose I have, to some extent, accomplished that. All that’s left is to play it.

Here are the sheets and short, if slightly ineffectual, notes. Do take note that the MIDI is far from an ideal rendition of this track; I believe it can be interpreted in many ways, however narrow such a range may be. 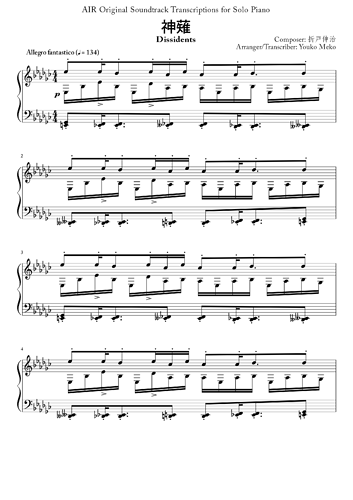 Next up is Tsukiwarawa, the final Summer track.

When you’re done, I’d love to do an article featuring all your work on the front page!